You may assume that as a professional photographer I’d prefer to put luxury goods, celebrities, and models in front of the lens. But my ultimate passion is photographing old people. Very old people. Maybe it is because, in my previous work as an advertising art director, I had sufficient opportunity to experience the life of a photographer as one would typically imagine it.

I travelled the world, visiting the most sought-after and exclusive places on earth, with the most attractive people, presenting premium fashion and cosmetics brands in their best light. In many ways it was a wonderful, exciting time. But it also made me yearn for new challenges and to seek a subject beyond these staged dreamworlds, something that had more to do with myself. With humanity. With our existence. With the future.

I set off in search of another kind of beauty, perhaps the truest kind — a beauty that knows no expiration date. A timeless beauty that only grows over the years. A beauty that springs from life itself, from experience, wisdom, curiosity, pleasure, passion, and optimism, but also speaks of the hardships of everyday life, of defeats and victories.

This subject was old age. This kind of beauty does not need hairdressers, stylists, or makeup artists. To attain this beauty you need a few decades — or, better yet, an entire century.

As English author Evelyn Waugh once said, “Old people are more interesting than young.” I think I’ve known this from the time I was a boy. During my childhood I spent a lot of time with my father’s parents and my mother’s mother.

We lived on the same street in a small town in southwest Germany. I loved the feeling of security my grandparents gave me. I loved my grandmother’s roasted potatoes, and the swing and the merry-go-round my grandfather set up in his garden just for me. I loved that he was able to create an entire children’s world, just like that — all he needed was a toolbox.

I loved our conversations, their easy-going nature and generosity, and the kind way they looked at me — as if they already knew the answers to so many things before I could even come up with the questions. It was as though there was no doubt that I would make my way in life even before I held the map in my hands.

I admired my grandparents for their authority, patience, cleverness, and nobleness of heart, for their trust in me and also their trust in life itself, despite all the horrors their generation had lived through. They taught me something essential: life is what gives life its meaning.

My initial photographic work with old people began in the mid 1980s, when I was in my early 20s, during my 18 months of alternative national service in a retirement home, where I documented daily life in the residence. Today I photograph people who have grown older, as most of us can expect to do.

These people have seen, experienced, and lived through more than most of humanity. I can hardly think of anything more thrilling or exciting than to search for these people, sit before them, see their faces, and hear their stories.

I raced across the entire world photographing these portraits. The shoots were always an adventure. For my July 2015 meeting with Susannah Mushatt Jones in New York, I was so excited that I accidentally waited for 90 minutes in the wrong apartment building before realising my mistake. At that time, she was one of only a few people born in the 19th century still living, and I was eager to take her photograph.

But by the time I arrived, Susannah was taking a nap. It was an almost sacred ritual that absolutely could not be disrupted by a photographer from Germany, her two nieces insisted. So I photographed Susannah while she slept in natural daylight. For all of the images in this book, I believe that light gives the portraits their magic and power — showing the faces as they are and letting them tell their own story. 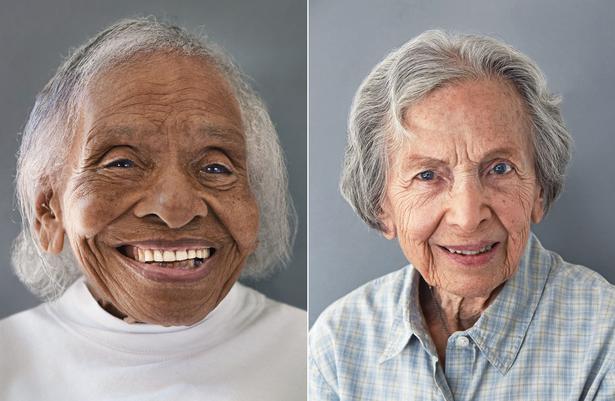 As I travelled the world pursuing the subject of old age, I met magnificent people who touched me with the stories about their lives. Sometimes they themselves were surprised at how old they had become and were able to laugh about it. One of my subjects said, “If you had offered to photograph me 70 or 80 years ago, it would have made your job much easier.”

I looked through many photo albums during these visits, including one belonging to 102-year-old Edward J. Palkot, whom I visited in July 2015 in Garden City, New York. During our meeting he showed me a well-kept photo of himself as a 2-year-old taken in 1915 by a photographer in his hometown of Pittsburgh.

When we look into the faces of the elderly, we are ultimately looking into our own future. We learn so much in doing so. We learn that aging is a law of nature, part of a brilliant whole. It follows a universal principal: it is constant, irreversible change. It begins the day we are born and is not over until we die.

But this is necessary, because without decay, life would not be so infinitely precious. Aging has its own laws, but it is only our attitude and our judgments that make it into something positive or something frightening. We are the ones who determine how we age, and if we are smart, we will regard the aging process with the same remarkable serenity, curiosity, and humour that I discovered in the people I photographed for the book.

I hope their perspectives are as endearing, fascinating, and exhilarating to you as they have been to me.

1. KIYO ARAGAI
Born September 10, 1914, in Asahikawa, Hokkaido, Japan
Sapporo, Hokkaido, Japan
Kiyo says she had a free, idyllic childhood and a wonderful marriage “full of happiness and without any arguments”. She has her husband to thank for the fact that she has become such a good cook, “thanks to his wonderful sense of taste and his weakness for good food”. The couple travelled a lot, including to places abroad like Hawaii. She says she does not really have anything to complain about, nor does she have any regrets. She is at peace with herself.

2. EDWARD J. PALKOT
Born August 20, 1913, in Pittsburgh, Pennsylvania, USA
Garden City, New York
Former human resources director Edward Palkot was waiting in his beige sedan limousine to pick me up at the train station in Garden City, New York. “Without my car, I would be lost,” he says while driving to his favourite lunch spot, Leo’s. We pass his golf club, where he goes once a week with three friends, the small concert pavilion at a public park where he will go tonight, and a dance hall where he is also well known for showing up with his 89-year-old partner, Alice. His wife, Anne, who was of Lithuanian origin, died in 1998. Since then, he’s quite happy to have found somebody to love again.

3. OLIVIA HOOKER
Born February 12, 1915, in Muskogee, Oklahoma, USA
White Plains, New York, USA
When Dr. Olivia Hooker was 6 years old, members of the Ku Klux Klan ransacked her home during the 1921 Tulsa race riot. “I still don’t know why they bothered to burn up a little girl’s doll clothes, but they did,” she told the Wall Street Journal. “And that’s what made me very, very afraid. That was a startling thing for a child. It took a while to get over.” Decades later, Hooker joined the Tulsa Race Riot Commission and was among survivors who filed an unsuccessful federal lawsuit seeking reparations. In the 1940s she was one of the first African American women to join the US Army. In 1961 she earned her PhD in psychology from the University of Rochester and worked for a long time with women with learning disabilities. The walls in her tiny house in White Plains, in upstate New York, are plastered with diplomas and greeting cards addressed to her — from the Clintons, the Bushes and the Obamas.

4. BETTY MARKOFF
Born August 26, 1916, in Toronto, Canada
Los Angeles, California, USA
The secret to Betty’s long marriage to Morrie? Listening! And they have listened to each other for a long time — nearly 80 years. Betty first met her future husband at her cousin’s wedding in New York in 1938. Her friends tried as hard as they could to dissuade her from getting involved with the attractive Morrie. Fortunately, she didn’t listen and by the end of the year they were married. Like her husband, Betty likes to watch people. She has had ample opportunity to do so since the two of them moved to LA’s Bunker Hill, a lively hipster district. The neighbourhood is just as worth seeing as the view of the skyline from their spacious apartment.

• Extracted with permission from Aging Gracefully: Portraits of People Over 100 by Karsten Thormaehlen. Published by Chronicle Books, distributed by Bookreps NZ, $60.

How to Collect Art

From the Parnell ridges to a garage in Glen Innes, explore the machinations of the Auckland art world