At 88, neither Alex Katz's pictures nor his opinions have softened with age

“I am painting better, right now, than ever before,” says the 88-year-old American artist Alex Katz. We are standing in his fifth-floor loft on West Broadway in Lower Manhattan, where he has lived and worked since 1968. All around us is evidence of the “hot streak” that he has enjoyed throughout the winter: enormous, stylish canvases of landscapes and beautiful women, characterised by bold, bright colours and flat, simplified shapes. “Yeah, I am really putting them out,” he says, an endearing grin illuminating his face.

For a moment, he is like an excited schoolboy, eager to show off. “There’s a big green one that’s going to be in London,” he says, pointing to a monumental landscape, 15ft across, which will appear in his new exhibition, opening at the Serpentine Gallery in London next month. Painted last year, and titled Cross Light 3, it depicts a shadowy New England forest speckled with sunlight.

Spry and slender, with a shaven head, Katz — who was born in Brooklyn in 1927, and grew up in the residential borough of Queens — is a forceful, live-wire presence. Dressed simply in an open-necked white shirt and dark jeans, he speaks rapidly, in pithy, staccato sentences, almost as though parodying the rat-a-tat way in which wisecracking New Yorkers are supposed to talk.

While he remains blessed with ballsy self-assurance, Katz no longer has the physical energy that animated him as a young man: “I can’t paint six hours a day, like Bill de Kooning,” he says. “I paint quick and in spurts. But I still work seven days a week. The very great painters go on past 90, and do better work.” 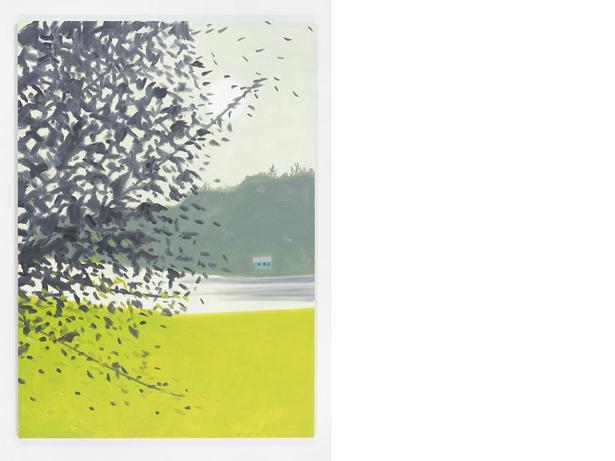 Does he feel competitive with the Old Masters? “Oh, yeah,” he says with a disarming smile. “I think I’m better than most of them.”

He’s not wrong. Katz is one of America’s most revered living artists. For six decades, he has been making chic figurative paintings of well-to-do American society that have become a touchstone for an entire generation of younger painters.

An ongoing display at the Metropolitan Museum in New York spans the arc of his career. It contains several of what Katz identifies as “big winners”, including Red Coat (1982), a portrait of Ada, his second wife, whom he married in 1958 (two years after divorcing the artist Jean Cohen) and has painted more than 200 times.

Characteristically enormous (the painting is 8ft high), it daringly crops Ada’s face, presenting it in radical close-up. Her lipstick, coat and hat assault the viewer with a barrage of scarlet. The exhibition at the Serpentine will contain another, more recent portrait of Ada, grey-haired but still beautiful and self-composed, like a prophetess from ancient myth, set against an orange background.

“She’s a great model,” Katz tells me. He compares her to Picasso’s famous lover and model, Dora Maar. “Dora Maar and Ada? Come on. I mean, they both have great faces. But Ada has a much better neck and shoulders. Picasso faked them — I saw this painting [of Maar], and I said: ‘That girl’s beautiful.’ Then I saw a photo of her and said: ‘Oh, he cheated on the shoulders.’?”

Typically, the characters in Katz’s paintings are good-looking, smartly dressed and brightly lit, like models in a fashion shoot. They appear affluent, even if they are not: “Most of my paintings are of poor poets and painters,” Katz says. So why the perception that he paints only privilege and prosperity? He shrugs. “I record whatever’s in front of me,” he replies. “It’s the style that’s fancy.”

What’s certain is that Katz doesn’t paint conventional portraits. “I’m not telling you about the person’s inner feelings,” he says. “I’m not interested in that stuff. Most realistic painting has to do with the plight of man, which I find horribly sentimental. I’d rather deal with the energy of life than the sadness of it.”

Indeed, subject matter, for Katz, is almost irrelevant: what matters to him is the impact of a finished painting — the quality that he calls “quick light”. “The light [in my paintings] is very aggressive,” he says. “You see it when you put them next to other people’s paintings. They are supposed to dominate everything else.”

Dominate is a word that Katz uses alot. Throughout our conversation, he makes it plain that he has always been intensely competitive. He still smarts at the memory of showing a weak painting in a group exhibition early in his career.

“There was a guy, named Beauford Delaney [an American painter associated with the Harlem Renaissance], and he had a painting that wiped out the gallery,” Katz recalls. “My painting was so delicate it just looked like a dish rag. I started to laugh. And I said, ‘This will never happen again.’ That was my introduction to real muscular painting.”

During the Fifties the most “muscular” artists, with whom Katz felt compelled to tussle, were the Abstract Expressionists, such as Jackson Pollock and Mark Rothko. When he was starting out in New York, after attending Cooper Union art school in the late 1940s, the Abstract Expressionists were, as he puts it, “the only show in town”. “They were making big, aggressive, macho paintings,” he recalls. So Katz decided to “dominate” them by painting “pleasant landscapes”.

“In a way, when I’m painting, I am trying to kill my fathers,” he explains. “The older guys were painting these metaphysical things, with a lot of internal stuff, and it just wasn’t my life.” He smiles. “So I didn’t take any of it seriously.”

Instead, Katz found inspiration in everyday commercial imagery, which he encountered on billboards, in the movies, on TV. Indeed, his paintings in the 1950s heralded Pop Art: years before the arrival of Warhol — who, he says, “ripped me off.”

Among his influences, Katz cites Matisse, whom he describes as “the most skilful painter in the history of Western art”, the Japanese ukiyo-e artist Kitagawa Utamaro, and the virtuoso English portraitist Thomas Lawrence (1769-1830).

“Lawrence is the flashiest thing ever,” Katz says. “And I like him for the flash. I’ll never be as elegant as he was, but I try to make something with a little panache.”

Above all, though, he says, a decent artist should have strong “vision”. To explain what he means, he tells a story about Cezanne. About a decade ago, Katz visited an exhibition of work by the French post-impressionist. “I was looking at his stuff and saying: ‘See, the guy couldn’t paint, it’s terrible, this is overworked’ — stuff like that,” he recalls. “Then, when I got on a train, all I could see were Cezanne landscapes. His vision is so strong that it dominates your mind. And that, for me, is the highest thing an artist can do.”

The curious thing about Katz is that, for all his bluster, he also seems surprisingly sensitive. He hero-worships his late father, Isaac, a Russian emigre who worked in the wholesale coffee trade. “Daddy lost everything and had to come to America,” Katz says, fondly. “In his younger life, he was a playboy. But he was super-smart. And super-physical. He dived off bridges: real he-man stuff. Totally intimidating.”

He pauses. “He was a big influence on me. His taste was great. He had terrific clothes: I’d always be borrowing his ties.”
Did he inherit his competitive streak from his father, too? “Absolutely,” he replies. “You don’t move far from your parents.

Good and bad. My father was very competitive with all males. And he passed me his insecurities. That’s part of it. You are not that competitive unless you are insecure.”

It’s strange: up to this point, Katz has sounded so self-confident. “From what I’ve told you, you could assume I’m arrogant,” he says, quietly. “But there are moments when I’m painting that I would ask the delivery boy for advice.” He laughs. “A lot of the time I have no idea if a painting is any good.”

What about a masterpiece such as Red Coat — surely he believes that it will be admired for centuries to come? “Most likely,” he says. “But I don’t care about that. In a hundred years? That’s a residue. It’s the here and now, that I’m interested in. If you get that, it explodes into eternity.”
— The Daily Telegraph

Portraits from the Streets of NY

Three Asian artists draw on their heritage to create contemporary works with meaning.