Many of us will have seen the video footage of George Floyd being murdered in a brutal police incident at the hands of white police offers on Monday 25 May in Minneapolis. It’s difficult to sit back and ignore the injustice. The father of two daughters had recently lost his job due to Covid-19 restrictions, and his death has since sparked outrage not only across the USA, but around the world.

That same day in New York's Central Park, Amy Cooper called 911 and falsely accused African-American bird-watcher Christian Cooper (unrelated) of threatening her life after he asked her to put a leash on her dog.

On Wednesday morning, Tony McDade, a black transgender man, was shot and killed by police in Florida.

Prior to lockdown on March 13, 26-year old Breonna Taylor, an African-American woman, was shot and killed by white police officers in Louisville serving a no-knock warrant.

On February 23, another African-American citizen was killed by two white men – 25-year-old Ahmaud Arbery, who was jogging in his neighbourhood in Georgia at the time. The father and son pair who shot him wrongfully suspected Ahmuad of being connected to a series of burglaries in the area.

Racial profiling in the US has a long and complex history, and combined with pent up tensions of lockdown and a volatile election year, race relations in the US have reached a critical point.

The racial profiling experience is one that hits home for many people of colour around the world; close to home, many, especially our Maori and Polynesian communities, have been vocal, standing in solidarity across social media with the Black Lives Matter movement.

While social media has proven to be a powerful tool for raising awareness, it comes with the murky territory of passive or performative activism too, with many people of influence unsure of how to use their platforms to appropriately show support beyond re-posting content.

A more active showcase of solidarity has called on people to protest at Auckland's Aotea Square on Monday June 1 from 3.30pm.

Yesterday I marched with my best friend. I am Samoan and she is white. We are so different but we have each other’s back. We both share very close black friends in America that we consider family and we love with all our hearts. As a group of friends we all have such different backgrounds, cultures and upbringings but it is our duty to understand, empathize and support each other. I know any of my friends would fight for me the way I fight for them. This is a great time to check your circle of friends and who you follow. If your friends aren’t marching with you and if they just don’t get it... then get new friends. • Photo by @sohrachsoh

Another important way to actively engage in complex issues is to educate yourself. While the Internet is full of helpful articles, sometimes a little deeper reading can help clarify many of the questions being asked right now around racism, and help people to better support the cause.

Here a just some of the essential books that explore racism and the African-American experience, along with some additional reading about wider racism for minorities and people of colour. 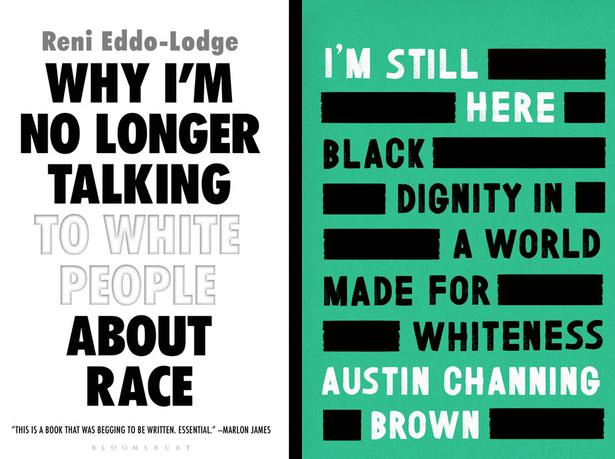 Why I’m No Longer Talking to White People about Race by Reni Edo-Lodge; I'm Still Here: Black Dignity in a World Made for Whiteness by Austin Channing Brown. Photos / Supplied.

Why I’m No Longer Talking to White People About Race by Reni Edo-Lodge (2017) published by Bloomsbury Publishing.

Winner of the 2018 British Book Awards Non-Fiction Narrative Book of the Year, Reni’s debut is an uncompromising book that opens up a contemporary discourse around race in Britain, and its release coincided in a time where the Black Lives Matter movement was gaining more traction. An essential read for anyone who wants to understand race relations in Britain today. Listen to Reni's Podcast 'About Race' Now

I'm Still Here: Black Dignity in a World Made for Whiteness by Austin Channing Brown (2018) published by Convergent books

Austin opens her memoir with, “I am not interested in getting anyone in trouble; I am trying to clarify what it’s like to exist in a Black body in an organization that doesn’t understand it is not only Christian but also white. But instead of offering empathy and action, whiteness finds new names for me and offers ominous advice. I am too sensitive and should be careful with what I report. I am too angry and should watch my tone when I talk about my experiences. I am too inflexible and should learn to offer more grace to people who are really trying. It’s exhausting.”

A powerful account of how and why our actions so often fall short of our words, Austin writes about her journey to self-worth and the pitfalls that kill our attempts at racial justice, in stories that bear witness to the complexity of America's social fabric. Austinchanning.com 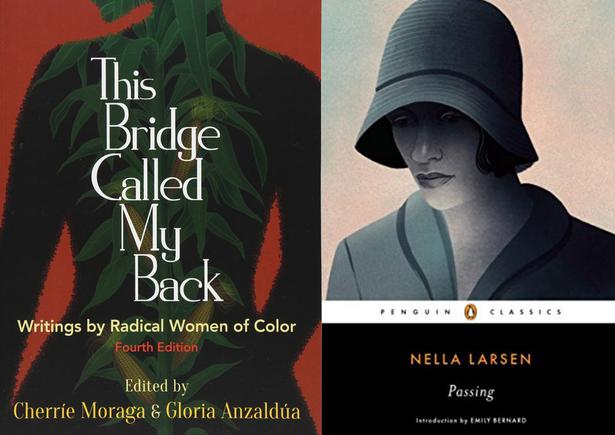 This Bridge Called My Back edited by Cherrie Moraga and Gloria Anzaldua; Passing by Nella Larsen. Photos / Supplied.

This Bridge Called My Back edited by Cherrie Moraga and Gloria Anzaldua (2015-4th edition) published by State University of New York Press.

One of the most cited books in feminist literature, first published in 1981, this book focuses on the experiences of women of colour through a series of short stories. Exploring themes of intersectionality, it also challenges the idea of sisterhood among white feminists and how this relates to the experience of women of colour. Buy here

A novel, this book is set in New York during the late 1920s and explores another taboo and complex aspect of the racial divide in the US – people who ‘pass’ and are accepted by a different racial group, particularly lighter-skinned African-Americans. The book centres around the reunion between two friends and the inextricable relationship between whiteness and blackness, and has been adapted into a soon to be released film starring Tessa Thompson, Ruth Negga and Alexander Skarsgard. Buy here 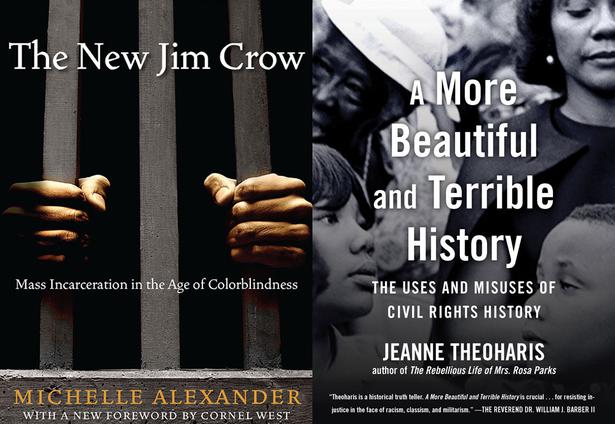 The New Jim Crow: Mass Incarceration In The Age Of Colour Blindness by Michelle Alexander (2010) published by The New Press

The disadvantages faced by black people and people of colour are explored in this book through the lens of the criminal justice system, and the New York Times bestseller doesn’t shy away from serious topics. Legal scholar Michelle Alexander writes that "we have not ended racial caste in America; we have merely redesigned it." The book’s release post-Obama being elected into the White House delves into the realities of the majority of black men in major urban areas are under correctional control or saddled with criminal records for life and denied basic civil and human rights.

WATCH: Author Michelle Alexander Talks About The Book At The University Of Chicago

Award-winning historian Jeanne Theoharis challenges nine key aspects and the uses and misuses of America’s civil rights movement, prompting readers to reckon with the fact that far from being acceptable, passive or unified, the civil rights movement was unpopular, disruptive, and persevering. White Negroes: When Cornrows Were in Vogue ... and Other Thoughts on Cultural Appropriation by Lauren Michelle Jackson; Sisters Of the Yam: Black Women & Self Recovery by Bell Hooks. Photos / Supplied.

White Negroes: When Cornrows Were in Vogue ... and Other Thoughts on Cultural Appropriation by Lauren Michele Jackson (2019) published by Beacon Press.

Cultural appropriation is something many people of colour and particularly African-Americans have had to deal with over the decades. From music and fashion to activism and language, black culture has a global influence, yet is rarely recognised or attributed to the source.

When it comes to who is allowed to thrive from black hipness, the pioneers are usually left behind as black aesthetics are converted into mainstream success and white profit. Weaving together narrative, scholarship, and critique, Lauren Michele Jackson reveals why cultural appropriation - something that's become embedded in our daily lives - deserves serious attention. Laurjackson.com

Sisters Of the Yam: Black Women & Self Recovery by bell hooks (1993) published by Taylor & Francis.

The conversation around mental health and the black community is a sub-topic that will only continue to worsen if action isn't taken to quell police brutality on people of colour. This seminal book reflects on the ways in which the emotional health of black women has been and continues to be impacted by sexism and racism. Writer bell hooks articulates the link between self-recovery and political resistance in this book which speaks specifically to the experience of black womanhood. Get to know more about the acclaimed intellectual, feminist theorist, cultural critic, artist, and writer here.

Stamped: Racism, Antiracism and You by Ibram X. Kenxi (2020) published by Penguin

Founding director of the Antiracist Research and Policy Centre at American University in Washington DC, where he is also the professor of History and International relations, Ibram X. Kendi’s book is a gripping, study on the causes and extent of anti-black racism. Winner of the National Book Award, the book chronicles the journey of racist ideas from fifteenth-century Europe to present-day America through the lives of five major intellectuals – Puritan minister Cotton Mather, President Thomas Jefferson, abolitionist William Lloyd Garrison, scholar W.E.B. Du Bois, and anti-prison activist Angela Davis – showing how these ideas were developed. Buy here 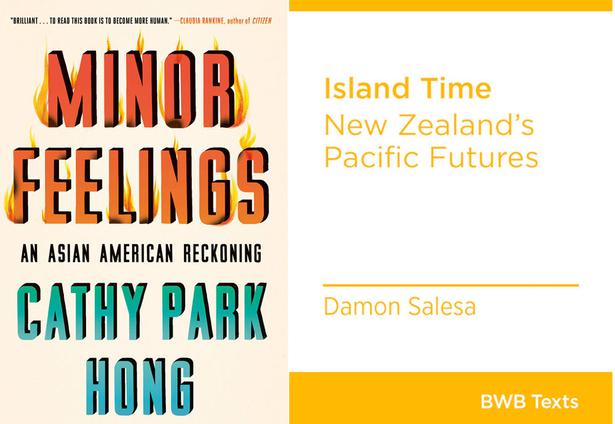 Written by award-winning poet and essayist Cathy Hong, her experience as an Asian-American is also unique to the conversations around race. Neither white enough nor black enough, Asians are unmentioned in most conversations about racial identity. Cathy’s honest and emotional story breaks down those stereotypes of Asian-Americans as high-achieving professionals. But in reality, this is the most economically divided group in the country, a tenuous alliance of people with roots from South Asia to East Asia to the Pacific Islands, from tech millionaires to service industry laborers. Hong uses her own story as a portal into a deeper examination of racial consciousness in America today. Cathyparkhong.com

Nelson-based author Oliver Sutherland’s book released in February looks at more than 15 years of research detailing the plight of children incarcerated by the justice system. This is the story of ACORD – the Auckland Committee on Racism And Discrimination. For 15 years ACORD exposed and campaigned against the institutional racism of police, justice, and social welfare systems. It laid the groundwork for a national duty solicitor scheme and gained protections for children incarcerated by the state.

“We called it a racist system because it was all based on a European value system and a European approach to justice and punishment. It owed nothing to a Maori world view and there were biases where Maori boys, all other things being equal, were prosecuted more than Pakeha boys.” Buy here

Damon Salesa is a scholar of Pacific politics, history, technology, culture, and society; the associate professor of Pacific Studies at the University of Auckland, and was the first Pasifika Rhodes scholar to Oxford. This is an important book for anyone wanting to understand the experience of Pacific Islanders in Aotearoa. What would it mean, this far-sighted book asks, for New Zealand to recognise its Pacific talent and finally act like a Pacific nation? Buy here