Get Up, Stand-Up: Are Women In Comedy Finally Being Taken Seriously?

Things have taken a turn for the hysterical as four of New Zealand’s top “female comics” pose for our photo shoot. There are lipstick breaks. Male-like swearing. “Boobs” that need taming, lest they sell too many magazines. At one point, the women punch the wall behind them, pretending it’s a glass ceiling, their soft knuckles recoiling.

C-Suite’s Evie Ashton, a “comedienne” who can’t control herself, wipes away a tear. She’s been hair-flicking and laugh-crying since she, Michele A’Court, and Hysteria’s Natalie Samy and Hannah Campbell started giggling at the camera like the preening “women in comedy”
they are.

“I’m being ridiculous and you’re just being sexy,” says a jazz-handsing Michele to fellow “woman stand-up” Hannah, she of the escaping mammaries. “F*** you!”

The “women in comedy” line has historically produced cringe-worthy groans, the prevailing feeling that it’s not helpful to put women in a separate category from the guys, one that simultaneously diminishes all professionally funny females, with their diverse talents, acts and styles. When American documentary-maker Andrea Nevins released Hysterical, a celebration of female comics, feminist critics questioned why the ladies should be singled out, as though they couldn’t hold their own against the men.

And yet, the women in this feature were selected to be interviewed because each of their upcoming NZ International Comedy Festival shows touches on gender identity, the feminist perspective or working exclusively with other females. “I’m one of five,” Evie explains to the group of her all-women improv troupe, C-Suite (as in Covert Theatre). “I don’t stand up there on my own — f*** that!”

Clearly there are conversations that still need to be had. So we put the conundrum to them. In 2021, should we even be talking about the differences between the sexes?
“It’s not really much of a conundrum,” says New Zealand’s best-known funny feminist, Michele A’Court. “Women have been, and regularly still are, under-represented. Even in 2021, you would be hard-pressed to find any line-up show or TV comedy show not heavy on the blokes.”

Her outrage at that, and everything from domestic violence to sexual harassment led her to conceive an open-mic-style show about it. From its origins at Wellington’s Verb Festival comes “Feminist Rage Night,” in which the stand-up invites women, non-binary and gender fluid members of the public to share their fury, whether through poetry, song, speech or simply a rant — a social way to exorcise our peeves.

“In the same way women were told we weren’t supposed to be funny, women are often told we are not supposed to be angry,” she explains. “Pissed off with the patriarchy? Have a massage! Buy a lipstick! Yeah, nah.”

“Sometimes we have conversations about power and women and the world and that comes out on stage,” says Evie. And Jadwiga Green, a trans performer, makes light of her comedy career launching off the back of a stint in a psychiatric hospital with Cardigan Faget, a “silly exploration of life on the margins of mental health, gender and sexuality”.

Meanwhile, Scottish-born Hannah Campbell and “beautiful mullet” owner Natalie Samy, have joined forces for Hysteria. The duo became friends when they both debuted at the Classic Comedy Club a few years ago, and are now regulars on the local circuit. They’ll each perform a half-hour stand-up show inspired by the droll observation that women have uncontrollable emotions, opinions, and (lol!) a desire for equal opportunities.

“The reality is the experiences for me as a woman, as much as it’s been beautiful, it has also been pretty traumatic and unfortunately relatable to most women and non-binary people,” Natalie explains. “It’s my job to be able to laugh at my pain ... It’s also a pretty sobering look into the realities women have to endure.”

“We want our female audience members to have a show they can relate to and, most importantly, shows that women are funny as f***!”

She credits the many people in the local industry who have worked to make comedy more inclusive, the almost all-female team behind the festival among them. Nearly half of the solo and duo shows in this year’s festival star comedians identifying as women, and for the first time, women will open and close the festival, with Justine Smith hosting the Best Foods Comedy Gala and Michele A’Court hosting Electric Kiwi Last Laughs — where the Billy T Award and Fred Award for Best NZ Show are announced. 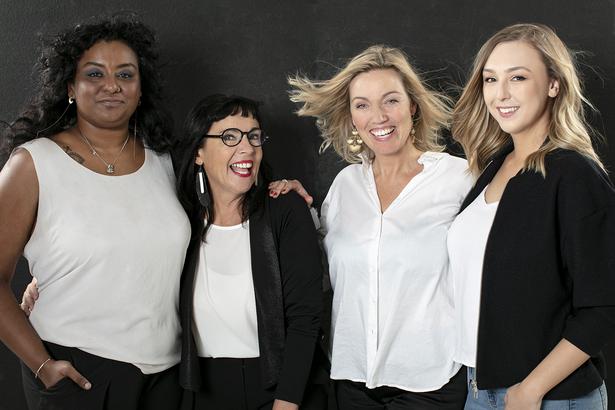 Says Natalie: “The reality is we are in a male-dominated industry that has been yearning for refreshing voices that actually mirror reality.”

After all, there are often just as many women as men in the audience; the consensus among these acts is that the New Zealand scene is moving in a positive direction. But ask any female comedian, and they’ll tell you it hasn’t always been sunshine and roses. Last year in New Zealand, an informal survey of 48 women found many of those working in comedy felt unsafe, with reports of serious abuse, discrimination and bullying.

Michele started in the comedy game in the early 90s when the comedy scene was in its infancy, meaning she could join it without feeling she needed to “ask permission”. Although she speaks of her male peers during that time in a positive light, she has nonetheless faced her fair share of ickiness. As the comedy scene grew, so too did the idea of it being a
boys’ club.

“I have arrived to work and been barred from the green room by a bouncer because a woman couldn’t be a comedian,” she says. “Once I’ve talked my way into the green room I’ve been asked, ‘Whose girlfriend are you?’”

She was also once asked if she was the stripper.

“There are places I haven’t been, jobs I haven’t done, there’s work I haven’t been offered, and dangerous situations I’ve had to escape,” she adds. “Most women in any industry will say the same thing.”

Abby Howells’ show might sound like a light-hearted romp, featuring ventriloquism and “lovely dancing”, but it’s also a meaningful comeback. The Dunedin-based comedian first tried stand-up eight years ago, loved it, did it for two years, then quit due to “a bunch of bad experiences, mainly dealing with male comics”.

“I’ve had some doozies in my time,” she says. “The whole audience chanting ‘take off your clothes’ while I tried to perform, being the only woman on a bill of 12, being hit on in the green room and then ignored in the green room . . . the list goes on.

“The culture around comedy is not really a place I want to be. It’s very violent, very masculine, even if you think about the language that we use around it: if you do well you ‘kill’; if you do badly you ‘die’.”

She notes that it’s not just the women on the stage who have been disadvantaged but those in the audience.

“Comedy hasn’t necessarily always been a safe place for female audiences, or really any audience member that doesn’t fit into the white, cis, male category,” she says. “You go along to a line-up show and there is a distinct possibility one of the comics is going to do a joke about sexual assault. And it sucks when something like that happens. It’s amazing how alone you can feel in a crowd.”

Six years on, she has returned to the stage, heartened by inclusive new comedy spaces and an increasingly supportive atmosphere backstage. Likewise, Michele is buoyed by the new generation of Millennial comics emerging on the scene, women she says “brook no s***”.

That includes disposing of one of the most common tomatoes lobbed at female comics. Global stars such as Amy Schumer have been both lauded and criticised for discussing territory usually only talked about in sex-ed. But as all four women uniformly agree, jokes about sexuality, periods and hormones should never be off the table.

“Women should be allowed to talk about whatever we want on stage, especially about issues we can relate to,” says Hannah of Hysteria.

“It’s ridiculous there’s an expectation that we should shy away from topics we deal with in everyday life because they’re ‘women’s issues’. You don’t hear dick jokes being called ‘men’s issues’.”

Adds Abby, “I love to see a period joke. Periods are terrible, they hurt, you bleed, you can leak through your pants, your hormones make you act in unusual ways, it’s funny stuff. I think that ‘women comics only talk about their periods’ is code for ‘I don’t like women taking up space with issues I can’t relate to’.”

Michele says she’s enjoying the comedic material she’s getting out of menopause now that it’s part of her life. “Comedy has always done a fine job of demystifying, of normalising the things we don’t talk about enough.”

Comedy is also a reflection of what society accepts, throwing a spotlight on where there’s tension, Evie adds. “So right now we’re waking up to a lot of bias in ourselves and each other and that includes bias about women’s value and how much space we’re allowed to take up.”

That’s quite a lot of space, Evie says, inspecting the images on the computer after the shoot, a fresh tear rolling down her cheek. “It’s like Lord of the Rings,” she laughs. “We look so big.”

It’s decided the new friends belong on an album cover. “I think we should call it ‘Male Tears’,” says Natalie. “Oh — we also sell real estate.”

The New Zealand International Comedy Festival kicks off on April 30.

Ahead of International Women’s Day, Rebecca Barry Hill looks at how the conversation around feminism is evolving, and where you...