Unlike most people, David Shrigley is extraordinarily productive on long-haul flights. While his fellow passengers are likely on their third gin and tonic with a pulpy action movie burning into their retinas, the Brighton-based artist finds the plane journey to New Zealand the perfect environment to get work done — even more ideal, perhaps, than in his everyday life. “It seems a bit ridiculous that I can’t replicate the situation,” he says. “I think it’s about being captive.”

David’s art is distinctive; he’s best known for his satirical works on paper that offer mordantly humorous commentaries on the human experience, presented in a way that seems childlike and simplistic at first glance, but often contain something surprising and subversive.

Sometimes it is political, like a painting of a brick wall with text that reads “I built this wall it only took a moment”. Sometimes they’re uplifting, such as a paint palette captioned “Art can change the world”, and sometimes, obscure, like the pile of coloured blobs under which it says “Doesn’t look like anything doesn’t mean anything”. David's Works on Paper are showing until March 2 at Two Rooms gallery on Putiki Street.

He’s currently showing some of his most recent works at Two Rooms gallery on Auckland’s Putiki St, and created all the pieces specifically for the show. His art is not usually context-driven, he says, “Although there’s a picture of a kiwi. And some flip flops. I’d call them jandals if I was really trying to use the patois.” There’s a New Zealand connection for David; his sister has lived on the North Shore for about 20 years, so he’s visited several times.

David, who recently turned 50, has been working professionally and successfully as an artist for more than 20 years. He studied in Glasgow, and lived there for 27 years. He and his wife Kim now divide their time between Brighton and Devon.

David has exhibited around the world, and his works are included in prominent gallery collections internationally, including the Museum of Modern Art in New York, Melbourne’s National Gallery of Victoria, and the Tate and British Council museums in London.

He was nominated for the Turner prize in 2013 and, in 2016, was chosen to create a work for the Fourth Plinth Commission in London’s Trafalgar Square, for which he made a seven metre-high bronze sculpture of a hand giving the thumbs-up titled Really Good. He’s worked with film, music, live performance and even with London mayor Sadiq Khan, on a poster campaign, London Is Open, as a positive counter-response to the Brexit vote. 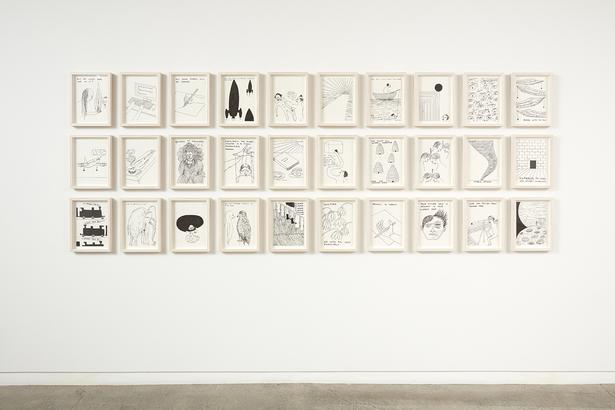 “I make a large body of work, and then I edit from it,” he says of his process. “And the stuff I don’t like goes in the bin. And that’s it.” Photo / Sam Hartnett

“I make a large body of work, and then I edit from it,” he says of his process. “And the stuff I don’t like goes in the bin. And that’s it.”

Most of his subject matter is intuitive, and he works quickly, not attaching importance to any particular image until they all coalesce into something that works and has cohesion.

“I’m kind of the go-to guy for this kind of thing,” he says, tapping his finger on a print of one of his works on the table in front of him. “But, in a way it’s like being the go-to guy for picking your nose. It’s something I invented and I never really expected it to be something that people would value so much. I guess I do know a lot about it intuitively. I don’t really think about it too much — how you get from A to B or how you get to make work that’s somehow good enough to show. It’s only on occasions like this when I’m invited to think about how it works.” 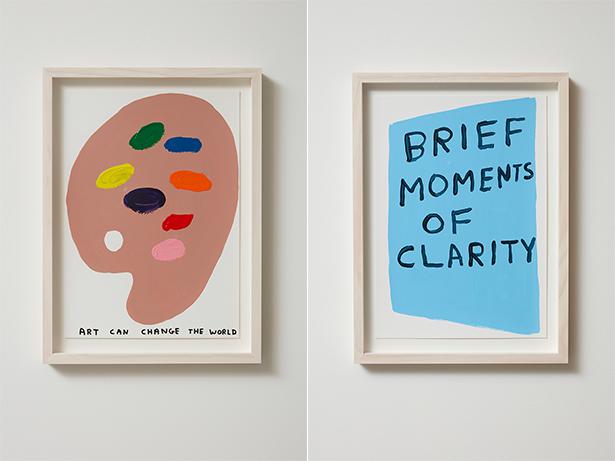 “I think laughter is really the only available response, it’s the only thing that’s going to make things better." Photo / Supplied

He seems blessedly free of the anxiety and over-thinking that seem to plague many of us, but maybe it’s because he’s been doing this for a long time, or perhaps he channels these feelings into his work and onto the page.

David’s work is relatable in the way that he’s able to tap into universally-held feelings. And humour has a bigger role than ever to play in his work. It’s about cheering people up, he says, and commenting on the “farcical situation” we’ve found ourselves in. “I think laughter is really the only available response, it’s the only thing that’s going to make things better, because trying to change it is virtually impossible. Anyway we’ll see. But yes, f**k Brexit, for the record.”

David has published many books of his art and poetry, and was recently involved in what he calls “a sort of rock opera, I suppose,” called A Problem in Brighton, for which he wrote songs, and built electric guitars from scratch. True to his style, some of them were a bit off, with missing strings and irregularly-shaped bodies. One guitar had a pick-up built on the back, meaning its player had to bang the back of it on his forehead.

As far as media he hasn’t worked with, he’d like to make stop-frame animation, but is yet to think of an idea to centre it around. He’s been watching some old films by Jan Svankmajer, a Czech avant-garde film-maker whose work has been influential for other artists, including Terry Gilliam. 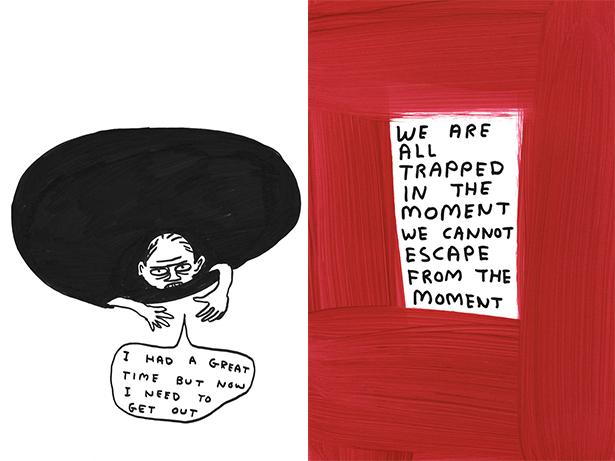 "There’s a certain sense of humour in the west of Scotland that’s very unique, very mordant, strange and surreal.”

David has a huge following on social media — nearly 220 thousand people follow his account where he posts mostly his art and a few other tidbits from his life. He views it as a useful tool.

“I had a thing where I never realised I was famous until I left Glasgow,” he says. “I lived there until 2015, and you live in some sort of fine art bubble where all my friends were people I went to art school with, and the only friends I had who weren’t artists were musicians or curators. And, because there are quite a lot of successful artists in Glasgow, I was just one among quite a number.

"When you leave that and go to a small provincial city like Brighton, suddenly I became the most famous artist in town, just by moving there. The whole Instagram thing is a way to cash in on that to some extent. I realised ‘oh yeah, I can sell prints and stuff to people who don’t really see me as a fine artist’.”

The time spent in Glasgow has certainly informed the way David works, but in a way that he’s only just managing to detect with the advantage of hindsight.

“There’s a certain thing about the language in the west of Scotland — it’s quite different and it lends itself to a certain poetry or prose almost. It’s quite difficult to quantify, but somehow people in Glasgow and the environs are funnier than anyone else, in a way that I cannot really adequately describe. There’s a certain sense of humour in the west of Scotland that’s very unique, very mordant, strange and surreal.”

He could be describing one of his own pieces.