Peata Larkin looks to traditional Maori weaving for her striking geometric artworks that are winning her awards, public commissions and critical acclaim Peata Larkin with some of her recent work. Photo / Ginny Fisher

The artist is hanging out damp sheets on a blustery spring day in Onehunga. There are menial chores to be ticked off before Peata Larkin, mother of two young children, can get back to her garage studio to wrestle with silk and paint in preparation for her opening at Two Rooms Gallery next week.

Peata could be the artist of the moment with her recent string of successes. In August she was the winner of the Kaipara Foundation Wallace Art Award for her mixed-medium work in silk and yellow paint titled They Don’t Speak My Language. She also has a number of large-scale public commissions on the go, including a 105m terracotta-tiled facade of the new Warren and Mahoney-designed New Zealand International Convention Centre in Auckland’s CBD and the design of several exteriors of Westfield’s $790 million, high-end Newmarket mall and precinct.

READ: Where To Find Auckland's Art Galleries To Browse

Both public works reference the history of Aotearoa, its waterways and fertile lands through her signature geometric Maori motifs in deep blues, greens and reddish browns. Her art sits in the middle of many mediums and ideas — woven Maori textile art, painting, geometric abstraction, digital pixelation and drawing. 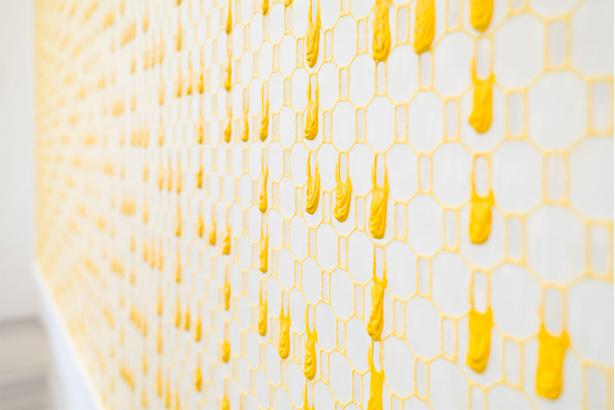 “Would you call them paintings?” I ask of her silk fabric-stretched works that hold globules of thick acrylic paint, pushed from the underside of the fabric. “That’s a great question,” she says. “I want people to question where my work sits. I’d say it’s the in-between space. But I call them paintings. I’ve always been a tactile person, many people have described them as Braille for the eyes.”

Her paintings, which often sit on mesh or textured silk, are rich in symbolism derived from raranga — the art of weaving. “Raranga has been my healing place,” she says from her cluttered work space that is stacked with works complete and incomplete — she’ll work right up to the day before her show opens. “Then I’ll sleep for a week,” says the night owl, who’ll often wake in the night and head to her studio rather than toss and turn.

With each work she references the book, Raranga Whakairo, a visual summary of the many patterns of Maori weaving, each containing their own tribal interpretations. Her research into the meanings of these patterns has helped Peata come to grips with her own tribal heritage — one that encompasses Tuhourangi, Ngati Whakaue and Tuwharetoa.

The 45-year-old, raised in Rotorua by her Pakeha father — her Maori mother left when she was a child and remains estranged — says she had a troubled childhood. “I wasn’t proud to be Maori,” she says. Upon reaching adulthood she started to question where she belonged, and began asking whanau about her Maori heritage. “Many times, whanau weren’t that forthcoming,” she says.

Not to be deterred, she kept doorknocking. Many cups of tea later, she was able to establish her tribal history and started fitting together the pieces of her own puzzle.

Now she feels very much Maori, and she says her art has not only helped her find her identity, but also her self-worth. In each of her paintings she will reference a pattern. For example, her Tuhourangi work referenced the poutama, or stairway to heaven pattern, and also referred to the Pink and White Terraces. This eye-popping pink and white diptych was purchased by the Rotorua Museum and demonstrates the way Peata is able to take these traditional patterns into the future.

Her process is unusual and very much her own. “I was always interested in positive and negative spaces and I love paint — the plasticity of it, what it can do,” she says.

She shows me one of her early works when she was a fine arts student at Elam in 1998, a canvas with a brazen hole cut through it and paint oozing from the corners of the cut back on to the canvas. It’s still one of her favourite works, because it was the beginning of an entirely new artistic language, a combination of painting, sculpture and texture and would become hers alone. She recalls another student giving her some mesh they had purchased and didn’t end up using. Thus the mesh paintings were born. “It really came out of play, she says.

READ: Inside The Waiheke Home Of Abstract Artist Gabriella Lewenz

Two Rooms Gallery owner Jenny Todd discovered Peata while still at Elam and followed her work while she completed her Master’s study at RMIT in Melbourne.

“I was impressed with the way Peata invented a new visual language in paint, which engages her Maori heritage and history in relation to new technologies and developments in science. She immerses herself in the materiality of paint, weaving an elaborate kinetic tapestry of pattern, colour and texture,” Jenny explains.

There are three steady artistic influences for Peata: first Argentine-Italian artist Lucio Fontana, an abstract artist who cut through paintings and sculptures to add spatial dimension. Second, American abstract painter Agnes Martin, who used the grid as an organisational element in canvases that were flooded with colour, and British painter Bridget Riley, who uses symmetry and asymmetry, dynamism and stasis to create works that play with the eye and seem to curve and undulate. In Peata’s latest series, which includes the award-winning work in the Wallace Art Prize, she works on a delicate silk material that has a pattern similar to that of a honeycomb, with bright yellow thread. “Yellow is my happy colour, my therapy colour,” she says as she points to the textural globules of paint she has pushed from underneath to create many of the raranga patterns she works with.

Also in her upcoming show are intricate ink-grid drawings that she describes as labour intensive, therapeutic and intuitive. Most works take up to 100 hours. She’ll sit for a few hours at a time on these and, to keep the kids happy, offers them grid paper to draw on at the same time — “it’s a wonderful way to keep them occupied,” she says.

Of these intense drawing sessions, she says, “I feel like my tipuna (ancestors) are telling my hand what to do.”

Whoever is controlling her hand does a steady job. These intricate, mechanical works almost have a digital quality to them from afar, but on closer inspection they still maintain a very much hand-made quality. “This is my voice,” says Peata, “pared back, yet complex.”

She admits to being cheeky when she titled her award-winning work They Don’t Speak my Language, which refers more to her artistic language than her heritage, but she’s comfortable immersed in the in-between space — between Maori and Pakeha, formality and freedom, mother and artist.

It seems she has found just where she belongs.

An Art & Food-Filled Tour Of Rome With Gallerist Danae Mossman