There is something hypnotic about watching a slab of clay being transformed into a functional vessel. The pottery wheel spins and the ceramicist’s hands magically pull a bowl out of a blob of clay using their thumbs and fingers in a lyrical motion.

The potter’s hands then cradle the object they have formed, smoothing its form or intentionally pushing it off centre with their clay-covered wet fingers. This is not an easy dance and mostly, for amateurs, myself included, ends in a sad skew-whiff bowl destined for the bin, or the emergency Christmas gift stash.

But ceramic masters like Aaron Scythe make it look effortless. He manages to punch out at least 12 delicate pots in 45 minutes, to the sounds of a Japanese rap soundtrack, his long, black hair pulled back in a samurai topknot.

Aaron’s work, along with other leading ceramic artists, is on show at the Auckland Art Fair. He, however, won’t be there. A self-proclaimed workaholic, he prefers throwing pots to talking pots and the quietly spoken 47 year-old is most happy when he’s creating in his Whanganui studio where he works 11-12 hours, six days a week.

His work has a distinctly Japanese feel, not surprising considering he spent 16 years in Japan exhibiting and studying pottery techniques in Mino, a city renown for its historic pottery traditions. He returned home with his Japanese wife and two children after the Fukushima Daiichi nuclear disaster in 2011. 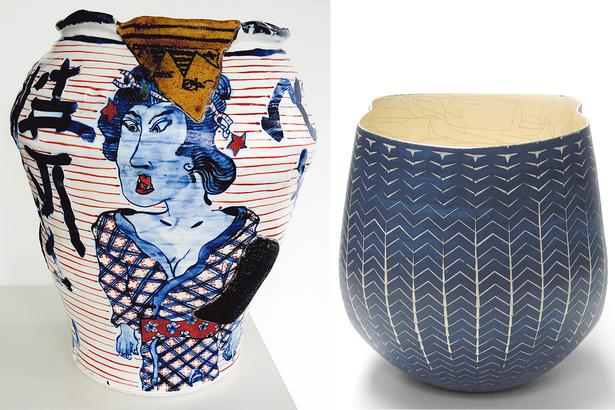 “In Japan pottery is one of the highest art forms and it dates back thousands of years,” he says. “In New Zealand, most still see it as a craft”, although he admits we are starting to see pottery move more into the art realm. But he’s not sure if it’s a trend or here to stay.

Certainly his latest art fair work is thought-provoking and seems more for admiration than putting to use. He says the majority of his work is created for functionality but he always asks himself, “Is it beautiful?” If it is and serves a purpose, even better.

For his current body of work Aaron follows the Oribe style, using a porcelain and clear glaze and bold painted designs. Oribe expresses an aesthetic of flawed beauty that fits with his own process of sewing together parts of broken pots, often used in ancient Japan when repairing broken vessels.

Aaron uses two types of clay to create these sewn-together pots, one porcelain, one stoneware, then he will throw 10 pots on the wheel, cut them up and join them back together. It’s a labour-intensive process; one pot can take a few days to complete.

But he’s in no rush. He hopes the result is an authentic and beautiful piece of earthenware. The great thing about pottery he says, is “you can hold it, look at it and use it”.

Another ceramicist making his mark at the Fair lives further north in Whangarei, but uses a slightly different method to make his delicate, patterned pots. Award-winning Mark Mitchell uses the slab building method, so he has no need for a wheel, instead he carves thin slices of clay and then uses his hands and fingers to manoeuvre the clay into plaster moulds. 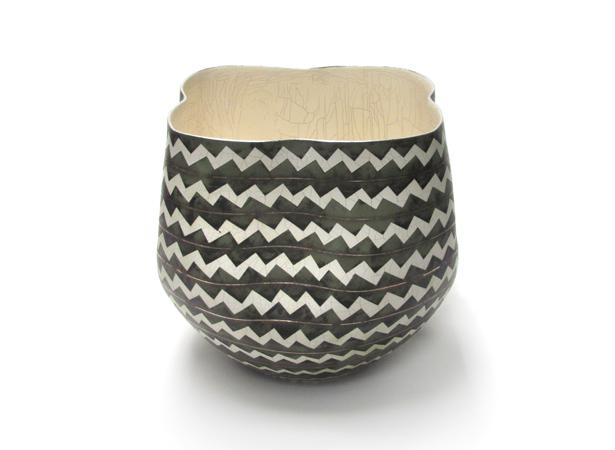 “I guess I started out as a kid, making mud pies in the back garden. My father was an instrument maker by trade, that definitely influenced me.”

After studying pottery at Selwyn School he went door knocking, hoping to learn from other potters. And as luck would have it, he ended up working with renown New Zealand ceramic artist Peter Collis.

“So much of clay making is process, rhythm and repetition,” he explains.

But realising he had to create his own style, Mark went back to study fine arts, where he further developed his skills and focused on surface treatments such as terra sigillata — a process whereby a lustrous coating of thin clay creates a glossy surface. He also started experimenting with decals and screen printing to create modernist surface designs.

Mark’s art fair works are crisply patterned and fine. He often uses vinyl shapes and cut cellotape to create designs on his pots, the decals act as a resist to the glaze, which then creates the desired pattern. He is influenced by many sources for his repetitive motifs — Islamic architecture, modernist grids, even New Zealand artist Gordon Walters’ Maori motifs. But the mood is always modern.

Like Aaron, Mark has been immersed in Japanese ceramics. He was chosen to represent New Zealand as an emergent artist at the Fule International Ceramic Museum in China in 2007, where he worked alongside a group of internationally recognised artists in an industrial tile and brick factory in the Shaanxi province.

Then in 2009 he spent a three-month residency in Shigaraki Cultural Ceramic Park, Japan, a now not-so-secret island that Mark says should be a must on any art buff’s travel wish list.

But the life of a potter isn’t all travel and residencies. Mark admits it’s a tough gig making a life from ceramics and other “safety net” jobs are required in order to continue the craft.

Whereas he may be able to produce only one fine art piece a week, add to that the 30-40 per cent crack rate in the final firing phase, he is now re-investing time in domestic ware, which makes better economic sense.

He suggests he may have landed a contract to supply tableware for a luxury lodge in Northland. “The collection has been inspired by my grandfather’s egg collection, with soft blues and dappled greens.”