At the Australian Grand Prix with Mercedes

The future of driving is a winning mix of style, performance and technology

We’re cruising to Albert Park in a luxury high-performance car chatting about intelligent drive. It seems counter-intuitive to me to be heading to the home of the Australian Grand Prix talking about a future where radars might rule the roads, ready to take over the wheel.

“Once you realise technology works, you trust it,” says Derek Bode, driving academy instructor for Mercedes-Benz. He’s got his work cut out with me. I want to look over my shoulder to park, rather than trust the reverse cameras, so the fancier gizmos of the S-class we are in take some getting used to compared with the basic Japanese car I usually drive.

Switching to cruise control on the freeway is one thing, but accepting that this car can do rather more than basically driving itself is another.

“A lot of technology is predicated on the basis of steer the car where you want to go and it will do the rest for you,” says Bode. He is talking throttle, brake, radar detection, pedestrian avoidance...

I’m easily seduced by the ability to chill the leather seats on this sweltering Melbourne day, but wonder: Don’t people who spend way more than the average annual salary on their cars secretly fancy themselves as racing drivers? Yes and no, says Bode, but they are certainly not all cut out for the job. 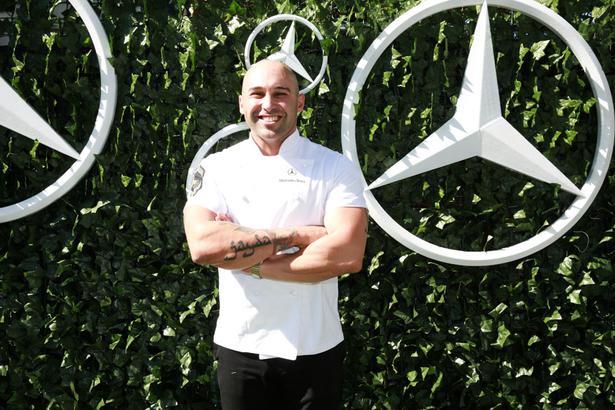 Race car drivers need a mix of heightened vision, feel, intuition and reflexes. On city roads this skill set also helps, he tells me, but with growing urban congestion more technological intervention in how we drive is just plain common sense for everyone. For starters, audio and visual warning signals help us cope with distractions and how other people drive.

Examples abound around us as wayward drivers drift across lanes and manoeuvre unexpectedly.

With a date trackside for the Ladies Luncheon at the Mercedes-Benz Star Lounge, I certainly don’t want to be caught in a collision. Not when there are cocktails and canapes awaiting. Top chef Shane Delia (pictured above) is serving up his modern Middle Eastern food and the ladies who lunch are eyeing up the new model cars they would like to upgrade too and hoping a high-profile driver might drop by.

Reigning world champion and Mercedes Petronas team driver Lewis Hamilton is in town and in the news again, for naughtily wearing trainers and supporting designers who aren’t on the list of sponsors.

The glitzy travelling circus that is Formula 1 sure makes great spectator sport and it is still three days out from the big race. Noisy practice sessions give a sense of what is to come, culminating in a final in which Hamilton’s team-mate Nico Rosberg holds him out and former champion Fernando Alonso survives a crash. 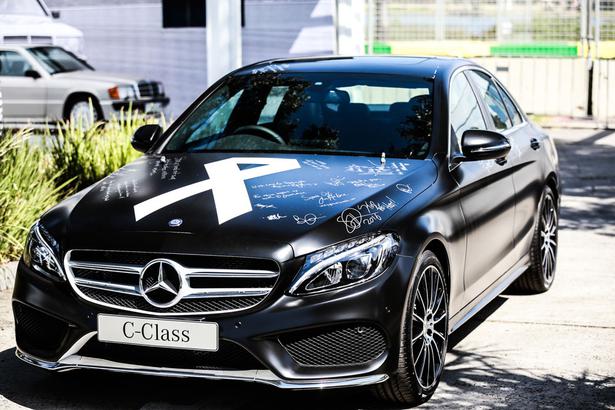 Bode, who has variously raced and managed teams over the years, makes an ideal guide to the interface between top-level racing and everyday driving. Research and development is the vital cross-over, he says. Across the motor vehicle industry, improved safety measures are saving lives.

Reducing accident rates saves the time and money even minor snarl-ups can cause on city roads. Features pioneered by Mercedes-Benz, such as ABS and EPS [anti-lock braking systems and electronic stability programmes] are now standard. The use of radars is growing apace. In the S-class these provide a virtual 360deg cocoon and at a more basic level are appearing in mass market makes and being legislated for in some countries.

“Basic urban collision avoidance will be in every manufacturer before too long,” says Bode. That Mercedes symbol on car grilles hasn’t just got bigger for marketing; its blacked-out innards house radar sensors. If push comes to shove our car can fire off warnings then take over and slam on the brakes. But even sudden stoppages or rear-endings are carefully calibrated to minimise whiplash.

“It’s trying to protect the occupants all the time,” explains Bode. Pedestrian safety is also factored in. A hit at 28km/h is considered survivable so if the car clocks someone in its path and it is going at 70km/h or less it has time to attempt life-saving steps, including driver warnings, auto-braking and exploding hinges to pop up the bonnet to form something akin to a metal airbag to save the pedestrian from being thrown through the windscreen. Bode tells me he can pick a good driver in minutes. He’s too polite to spell out his thoughts about me, but he does say that like many people I’m holding the wheel based on ideas passed down from the days of shakier suspensions.

Apparently quarter to three is the optimum grip position to reach this car’s controls and to view the on-windscreen display. This is projected above the dashboard so drivers need not look away from the road for basic information such as speed. Of course, if you are in distronic cruise control mode, the car regulates that for you, so you can avoid speeding tickets and ensure eyes up where they are meant to be.

“Vision is everything in driving,” notes Bode. “Driving quickly is all about slowing the brain down and looking.” Women, he tells me, are every bit as capable of being top drivers as men, although in racing they are few and far between. Boys start in go-karts in much greater numbers at a young age, accumulating vital early experience. To progress through the classes, big budget backing is vital.

This is a world of fast cars, vast money and the allure of risk, with spin-offs for all road users.