Ayesha Green is reclining on her inner-city studio sofa covered by thrift shop sheets in faded 60s florals in hues of lilac, lime and citron.

On the wall above her there are floral fabric samples from haberdashery giant Spotlight in saturated ditsy floral prints, motifs that are often in her paintings.

“I love purple so much, I can’t get enough of it — lilac, bluish purple, red purple. I love green too. I never work with bright colours; there’s real harmony in flat colours.”

The artist, who works predominantly in Resene house paint, says the flatness is due to the large amount of white used in making the pigment.

“It also allows me to control the consistency of the colours.”

Her painting style, which is based on illustration, relies on opaque hues and strong graphic lines.

Each painting has at least three layers of paint to create the required opacity.

Her recent work for the Auckland Art Fair features works inspired by a book published in 1837, titled The Sentiment of Flowers. 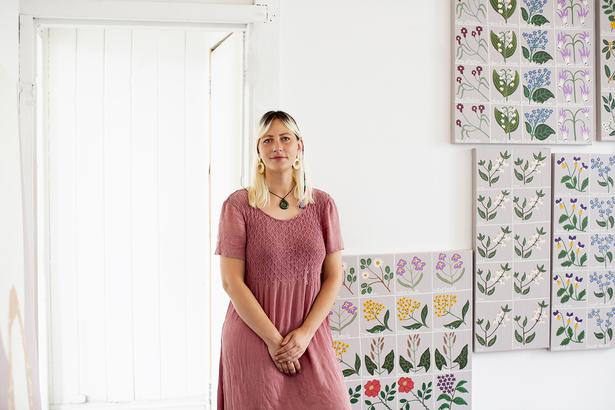 The book features detailed botanical drawings accompanied by symbolic scripts that attribute each flower or plant with an emotional meaning.

These types of books were common in the Victorian era, and were intended for female readers who were desperately looking for suitors.

“Women were supposed to read into the meaning of the bouquet given to them: a daisy meant joy; a tulip — declaration of love; snowdrop — hope.

I found it interesting that plants were given human attributes. It led me to wonder how objects or things in the natural world are given meaning.”

Ayesha, who is of Kai Tahu and Ngati Kahungunu descent, explains that te reo also has personifications of nature.

“We talk of mountains being ancestors, and of Papatuanuku — mother earth,” she says.

For this body of work, Ayesha made up her own bouquets, intended for her partner in Dunedin at the time.

She left out the more sinister ones — like borage for abruptness or cypress for despair or hydrangea for heartlessness (surely more appropriate for a breakup bunch).

Ayesha doesn’t always paint flowers. Most of her works are narrative-driven and often connect with the idea of how visual language tells the story of our nation.

“I have looked at colonisation, marriage, religion and nationalism and how Maori are included in the national story.” A common thread to her work is questioning the Eurocentric practices of anthropology and classification.

After completing her Master of Fine Arts from Elam in 2013, she went on to complete a graduate diploma in Museums and Cultural Heritage, which furthered her interest in anthropology.

Portraiture is also a strong component of Ayesha’s work. Her next show at Jhana Millers Gallery in Wellington this coming May focuses on portraits of family members and historical figures.

Hanging on the wall are two incomplete large portraits, one of her mother and grandmother standing side by side in their wedding dress — they were married in the same gown — and the other a depiction of Michelangelo’s Pieta sculpture that shows Mary holding the body of Jesus on her lap after the crucifixion.

Both works are in her signature flat style, with backgrounds in shades of lilac. The figures are monumental and in each an area of clothing detail — either lace or floral patterns — draws the eye.

Of her flat painting style, she explains she grew up in an era where cartoon-making was popular and is convinced this has affected her style.

Her formula is paying off with a number of awards and residencies including the 2019 National Contemporary Art Award, judged by Fiona Pardington for her painting Nana’s Birthday — an almost cartoon-like depiction of a grandmother and grandchildren blowing out the candles on a birthday cake.

For now, it’s back to the drawing board, working on the lace patterns of her grandmother’s wedding gown under the soft window light of her Karangahape Rd studio, maybe broken up with the odd nap on the floral sofa to dream up paintings to come.