Kiwi director Sasha Rainbow’s directional style is one you can’t miss. It brims with tongue-in-cheek attitude and vivid colour in a range of documentaries, music videos, and commercial content. It’s award-winning too. Very.

Her latest documentary, Kamali, about a 7-year-old Indian girl breaking gender stereotypes through skateboarding, has been nominated for a Bafta, adding to a host of awards it has received at film festivals worldwide — look out for a possible screening at this year’s New Zealand International Film Festival.

The 24-minute film follows the story of Kamali Moorthy, the only girl skateboarder in the small fishing village of Mahabalipuram, who has a self-assured manner as feisty as her board skills. Its tender, triumphant narrative also centres on Kamali’s mother Suganthi in the wake of her brave decision to leave an abusive husband and empower her daughter for the future through skateboarding.

Originally from Wellington, Sasha has a passion for storytelling and social causes which has taken her to places such as Africa, Romania, France and Chile.

She’s been working out of London for the past 12 years and will soon move to LA to be closer to New Zealand. Sasha is now developing her first documentary, Kofi and Lartey, about two young boys in an electronic waste dump in Ghana, into a feature film, among several other projects this year.

Ahead of the Baftas next week, Viva talks to the talented director to learn more about the film that’s had audiences around the world buzzing.

How did you discover Kamali’s story and what compelled you to make this documentary?
I was filming British band Wild Beast’s music video Alpha Female in India, about females who are skateboarding. I then stumbled on this photo of a little girl in bare feet whizzing down a ramp. I knew she had to be in the video. When we finally tracked Kamali down, she and her mum Suganthi travelled from their village to Bangalore for the first time especially for the video. When Kamali stepped on to the skate park her eyes lit up — she’d never seen anything like it.

Kamali and Suganthi stayed with us for the rest of the shoot. Kamali’s English was limited, so her mother sat with her and ended up talking about her own story. By the end of that conversation, we were in each other’s arms. Here was a woman my age going through a completely different experience to me. I think it resonated with me because I am a first-generation New Zealander on my mother’s side and my mother is a refugee. I have always thought about the decisions my family had to make in order for me to be where I am today. 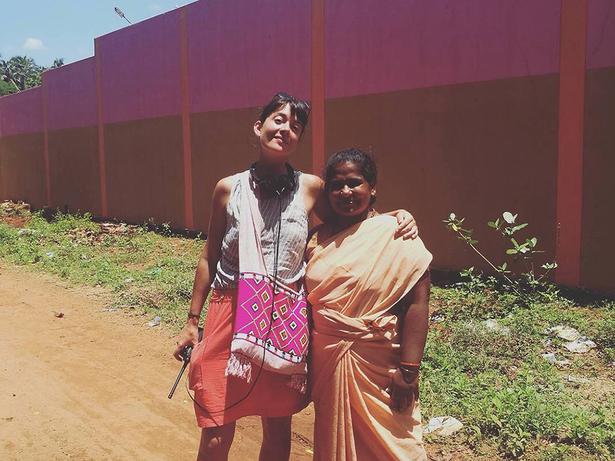 Tell us about Kamali’s mother, Suganthi, and her impact on the film?
Suganthi is a single mother, which is unheard of in traditional Indian society. She chose to leave an abusive relationship and was ostracised by her community for doing so. She then let her daughter skateboard — the only girl skateboarding in the village. In the film we see her going on a pilgrimage. She leaves her house for the first time on her own and it’s a journey to self-empowerment. That’s what we never planned for, to see how this mother’s struggle to empower her daughter inadvertently empowered herself in the process.

What was the filming process like?
It was difficult at times because of the language barrier, they speak Tamil. Suganthi’s English isn’t great so as a film-maker I was intuitively being guided towards the story. It wasn’t until we had the translation [during editing] that we were able to actually understand what was going on fully and the amazing moments that we had tapped into.

Did you expect Kamali to resonate so widely?
I’m so surprised about how well the film has done, especially in places like the US. It feels like proof that people want the kinds of stories that show positive change is possible. We are inundated with doom and gloom so it’s exciting to see people being so responsive to an ultimately empowering story that [also] tackles very heavy and dark subjects about abuse and abandonment.

What’s the process involved in being nominated for a Bafta?
There are Bafta qualifying film festivals that your film must win to be considered. Members vote to put them on a shortlist of 10 and then another round happens with the nominations [to get them] down to five films. The winner is announced at the ceremony.

How does it feel to be nominated?
Honestly, I already feel like we’ve won coming that close. I’m just going to try to really enjoy the moment, and take it all in.

What’s exciting you about the film industry right now?
There’s a really big push for stories from under-represented people from people of colour to indigenous people. We are kind of being propelled toward a new phase where there is a diverse range of voices being heard. It’s taken a long time for women to push for spaces to have their voices heard but we’re getting there now. In New Zealand I’m ready to hear the immigrant experience, I’d love to hear more Maori stories. I think we will see a lot more of that in the next 10 years … how much more interesting it is going to be.

What is it about film-making that appeals?
It’s an opportunity to throw light on to stories that we haven’t heard before. To celebrate the kind of heroes that I want to celebrate. In the end, perhaps it’s my way of trying to understand what this funny life is all about.
I’d guess I’d call [my film-making style] ‘hyperreal’. I’m really fascinated with trying to view the ordinary, the things we take for granted, with a new lens. I like to skew our perspective by exaggerating or creating juxtapositions with colour, music and lighting, and see what we discover about our environment and ourselves when we look from a different angle. How did you get into film-making?
I was living in London with my New Zealand ex-boyfriend who was a musician and needed a music video. We had no money, so just found a shopping trolley to use for smooth camera movement, a spotlight and a DSLR camera and filmed it in a small empty room. It was such a success he was signed to Universal Records and the next time we made his video I had a proper budget, but no idea what I was doing. By end of the day, I had forgotten my nerves and realised I’d been directing all my life; coming up with ideas, drawing pictures, gathering people together to create ... and knew I had found my vocation. The next day the same production company called to ask to represent me. That was eight years ago.

What else are you working on this year?
I’m about to start production for my first feature film in New Zealand, a black comedy called One Degree of Separation about a young New Zealand woman who has been abroad for several years, who returns home when her father dies only to discover he has left his estate to a mysterious young man. I’m really looking forward to working in New Zealand again.

See 2019’s most stylish musical project in its full glory