"Homecoming" is a new concert film written, narrated, directed and produced by a pop auteur at the peak of her abilities. Photo / Getty Images One year on from her Coachella headline show, Beyonce's new Netflix documentary charts the cultural phenomenon of one of the biggest moments of her career

Hey, remember that time Beyoncé compressed the meaning of her art into a single costume change? It came right off the rip at her nonstop Coachella performance last April - with a single snare drum announcing her arrival, she sashayed toward the stage dressed like a 22nd-century Nefertiti, radiating a majesty that was not of this world.

Then, minutes later, she was sporting cutoffs and a smile, bouncing her way through "Crazy in Love," standing alongside the rest of us in reality, helping us envision a world more extraordinary than the one we've inherited.

So that covers the first eight minutes of "Homecoming," a new concert film written, narrated, directed and produced by a pop auteur at the peak of her abilities. If you have a Netflix password and two more hours to spare, you're in for one of the greatest concert films ever made.

And yeah, when we plunge Beyoncé into a fog of digital hyperbole, we threaten to strip her excellence of meaning, so let's go to the tapes. Because up on that Coachella stage, she's pure momentum, toggling between imagination and reality in a way that feels like relentless forward motion. 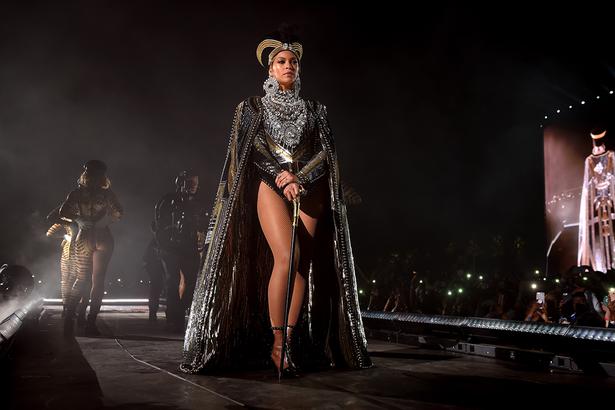 At her Coachella headlining performance, Beyonce "sashayed toward the stage dressed like a 22nd-century Nefertiti, radiating a majesty that was not of this world." Photo / Getty Images

Thankfully, "Homecoming" freezes all of that mystery-movement into celluloid for the ages, capturing one of the absolute best at her absolute best. If the citizens of tomorrow need to convince their kiddos of Beyoncé's greatness, they'll point back to this.

As for the film's title, it can be as literal or as figurative as you need it to be. The concert footage - taken from two separate headlining spots at last year's Coachella Valley Music and Arts Festival in balmy California - captures more than 200 backing musicians and dancers tirelessly building an unstoppable groove, all in loving tribute to the homecoming culture of America's historically black colleges and universities.

In the film, our narrator also frames the gig as her personal homecoming to the stage after the birth of her twins.

And as the nucleus of her very own marching band, Beyoncé sounds right at home, going after huge notes in a riptide of golden brass and martial rat-a-tat.

She twists everything impossibly tight, then loosens up during the transitions and interludes - chasing a Fela Kuti riff into "Deja Vu," or dancing to the tick-tocking "Triggerman beat" made famous in a bazillion New Orleans rap tunes in the middle of "Get Me Bodied."

And in these moments, something switches - Beyoncé becomes a hyper-attentive listener along with the rest of us. (And if you'd prefer to witness these feats without your retinas getting in the way, good news: "Homecoming" has also been released as a live album.)

But they make the cinematic transitions of the film itself feel all the more frustrating. To give viewers a breather from the concert's rhythm-rush, Beyoncé narrates her grainy rehearsal tapes, spelling out exactly how grueling it was to pull this entire thing off.

READ: Why Formation is Beyonce at her Most Fashionable

"What people don't see is the sacrifice," she says. "It was a dream come true, and something I feel like I've worked my entire life for," she says. "Every tiny detail had an intention," she says.

Commit your ears and eyes to "Homecoming" and all of that stuff quite literally goes without saying. In fact, these behind-the-curtain segments are the only moments that make the film feel less than perfect.

We don't need Beyoncé to explain her artistry to us. It's never spoken more powerfully for itself.