Opinion: What Happened To Britney Spears Would Never Happen To A Male Celebrity

Famous men often terrorise others and endanger themselves without losing basic human rights. Yet Britney Spears wasn't so lucky

There is profit in calling women mad. History — and literature and cinema — is filled with heiresses placed in institutions so men could spend their money. (There are fewer examples of this happening to men). Britney Spears, who is 39 but treated as a child, is one such archetype and only a woman would be expected to endure it.

In 2008 she was placed under the control of her father James P. Spears after she collapsed and, under the cruel gaze of the tabloids, fled a rehabilitation centre and shaved off her own hair in an LA barbershop, which, though frightening to watch, is a fairly normal act of self-harm under stress.

It was reported that she did this after an argument with her then husband Kevin Federline over access to their children. Eventually he got $20,000 a month in child support, and she paid his bills for the custody battle. Read about Spears, and you will learn that this is typical.

READ: Get Up, Stand-Up: Are Women In Comedy Finally Being Taken Seriously?

Spears is now seeking to have this conservatorship — a type of guardianship — overturned, although, since 2019 her father has only controlled her £40 million fortune, for which he is paid at least £150,000 a year. Her personal life is governed by another conservator appointed by the court.

She has testified that she is forced to use contraception, was held in a mental health institution against her will and is forced to perform music, again against her will. As long ago as 2016 a court investigator wrote: “the conservatorship has become an oppressive and controlling tool against her”. Spears was, “sick of being taken advantage of.”

She is “afraid” of her father. Fans responded with an online campaign to #FreeBritney. In 2019 Miley Cyrus shouted the slogan at a concert; Bette Midler and Sarah Jessica Parker tweeted their support. (Judy Garland trusted her fans too; on London concert tours they acted as her hand maidens. By the end felt that they alone could hear her).

It is obvious that this conservatorship is not in Spears’s interests; and not just because, at the age of 39, with the child long gone, she says so. If she is well enough to perform — and to support those around her, including those who profit from calling her incapacitated, which is a dark and very repetitive irony in this case — she is well enough to make other choices, such as the colour of her own kitchen cabinetry, and whether — or not — to have another child.

If her paid protectors were so concerned about her mental health, she would not work at all. A first-year psychiatric student nurse could tell you that. Performance is, by itself a kind of drug. Yesterday in court in Los Angeles Spears won the right to appoint her own lawyer to fight for her autonomy. It is a beginning.

READ: Actor Yara Shahidi Is A Determined Voice For Change

There is a public hunger to see female artists collapse, which is, by turns, insatiable and vicious. Those photographs of Spears shaving her own head in distress — the hairdresser refused to do it — should never have been published. That is obvious. But we are talking about profit, and there is profit in despair; it is sickening to read of that hunger for profit extending to Spears’ own family. 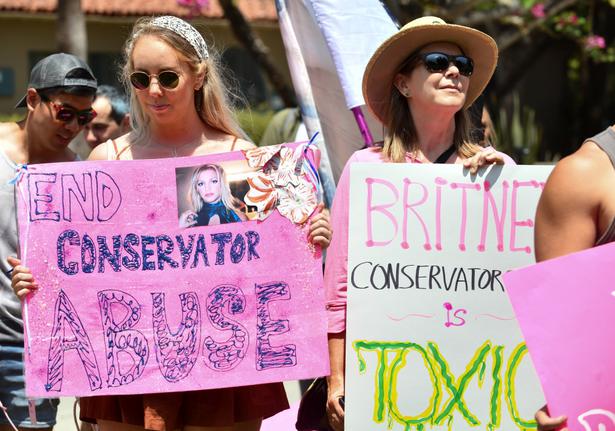 Amy Winehouse was of no interest to the tabloids when she was (briefly) well, although you cannot make the same comparison with Judy Garland because, after the age of 14, when MGM began to feed her uppers and downers so she was slim and hard-working (and could then sleep at night) she was never well. As Amy Winehouse unravelled, she was followed everywhere, as was Spears.

I am sure Leo Tolstoy with his dictum on happy families would have a line on this. The dual narrative of agony in art and life is irresistible; though talent, of course, does not equal suffering and it is not suffering that makes these women exceptional. Too little is written on that; emphasis on misery, rather than skill, is a kind of diminishing, a sucker-punch. Rather, I sense a rare kind of sadism, and greed. Is it too cruel to say that the suffering makes the music more meaningful to us, for the few minutes that we give to it?

When you watch Spears, 16 and luminous in knee-high white socks and pink hair bobbles, singing: “My loneliness is killing me,” you know something terrible is ahead. This character — and it is a character — is a child with a woman’s regrets. She better catch up fast, and she did: “I lose my mind,” she sang. Then: “Hit me, baby, one more time”.

Some fans are aware of their complicity; by devouring the material of her breakdown — shall we call it the B side? — they suspect they hastened a tragedy. There is another hashtag in the campaign, most famously tweeted by Courtney Love, who would understand: #WeAreSorryBritney.

We should be, because it is impossible to imagine a modern male artist being denied his freedom in the way that Spears has for a normal — so normal it is cliched — response to child stardom. One correspondent wrote on Instagram: “Can you imagine Justin Bieber in his drag racing in public streets, spitting into crowds, melt down days being told he had to get a vasectomy by his mum, just in case he had a baby while he was off the rails?” Can anyone?

Justin Bieber was a danger to the public: accused of drug abuse, vandalism, resisting arrest and careless driving. Macaulay Culkin was arrested for drug possession; Shia LaBeouf has been treated for alcoholism and was accused of assaulting a woman, an accusation he denies. None of them lost their autonomy for 13 years to a man they told a court they are afraid of, while all the time working to support him.

It is as Spears has been preserved in her schoolgirl incarnation and her knee-high white socks. It makes sense, I suppose, if you are cynical. It was her most commercial — and therefore most desirable — self.

The long-running celebrity series has come to an end. The family’s influence on modern culture is incalculable

From their latest Pride collection to their history championing social rights and fighting discrimination, Levi's demonstrates ...