"South Africa is at a unique stage in its development as one of the world’s premium-quality wine producing countries. It commands the attention of many critics but not, as yet, the stratospheric pricing seen elsewhere. Previous generations have left a rich legacy of old vines, the full potential of which is only now being realised.”

These are the words of Stephen Towler, Emirates senior beverage adviser and the man who is leading our group of journalists from seven different countries on a tour of some of the key vineyards around Cape Town.

Choosing wines for any menu is always a fascinating process; when it’s for one of the world’s leading airlines, whose clients are jet-setting passengers from all over the globe, and you serve close to a mind-boggling six million bottles a year, it’s a whole other level. Emirates, understandably, takes its wine seriously. Since 2006 it has invested $700 million in wine and has in its cellar seven million bottles — some of which won’t be ready for drinking until 2035.

“Maintaining close relationships with the winemakers, chateaux owners and merchants and keeping abreast of developments in the different wine regions is imperative,” explains Stephen. “The company searches the globe looking for the best wines from South Africa, Bordeaux, Napa, Barossa, Marlborough and more.

READ: A Guide To Getting Around Hawke's Bay Wine Country

“Our approach of building direct relationships with winemakers has also allowed us to serve some rare vintages. For example, we launched the Emirates Vintage collection this year, which is a selection of some of the rarest and most premium wines which have been stored in the Emirates cellar for up to 15 years. The Waterkloof restaurant and winery dominates the hillside and looks out over Cape Town. Photo / Supplied

“We serve more than 200 wines a year and draw from a huge variety of Chateaux and estates to ensure that we offer elegantly constructed wine lists. We have a long-term buying strategy that sees us purchasing these wines in advance. We have also cultivated relationships with some of the world’s best chateaux giving us access to some very exclusive and limited parcels of wine. Our wine specialists are hands-on and are involved at every stage from the sourcing to the tasting process.

“Each wine is especially chosen to withstand the rigours of flight to ensure that the quality will match the quality of the meals. We always look for wines with good acidity that tends to flatten when at altitude, which makes for a more balanced wine while flying. We also like to have wines with strong characteristics as they often show better.”

If you have been to Cape Town you have probably been to Stellenbosch — South Africa’s most famous wine region. We head directly from the international airport to Ken Forrester Wines situated on the slopes of Helderberg Mountain.

After a quick drive around the picturesque vineyard under a setting sun, which turns the sky bright orange, we find ourselves at the cellar door for a tasting with the main man himself. Ken Forrester is the godfather of chenin blanc. A founding member and the chairman of the Chenin Blanc Association, he is passionate about promoting the wine and his own award-winning wines have featured on Emirates flights since 2010. “I’ve know Ken for years,” says Stephen. “He invited me to his farm and opened up some 10-year-old bottles of his Old Vine Chenin and that really showed me what the grape was capable of in South Africa. Full of apple-pie and orange-peel flavours, it was delicious. I have a lot of respect for Ken’s palate, he’s not afraid to leave a little residual sugar in his wine, which opens up a whole host of food pairing opportunities, especially with some of the local Cape Malay cuisine. We regularly serve his FMC Chenin Blanc in first class.”

The next day, in the small township of Franschhoek, we find ourselves at the gates of Boekenhoutskloof — one of South Africa’s top producers, which specialises in syrah. Its premium range sells out on release each vintage, while The Chocolate Block — a syrah-based blend — is hailed as one of the most successful new wines to come out of the country in recent times.

Our host is Marc Kent, who back in 1993, at just 23 years old, joined the group of business partners in the purchase of a historic farm and started building the Boekenhoutskloof brand into the multi-million dollar business it is today.

READ: What Makes Something Truly Artisanal?

As a managing partner and technical director, Marc is a leading force. “We live by the mantra that ‘the quality lies in the second half of the bottle’,” he enthuses. “We make wines for drinking and not for tasting.” And, to prove his point, invites us to sit down to a delicious al fresco lunch and a chance to try first-hand the wines he says are made with an ‘artisanal and non-interventionist’ touch.

Over lunch Marc regales us with stories of stars who have visited the vineyard — from Bono to Bob Geldof — discusses how South Africa, as the oldest of the new-world wine producing countries, combines the power of the new world with the elegance of the old, and shares the challenges they face from changing weather patterns to the reality of declining national planting.

“The realities of growing from a tiny boutique producer to a mid-sized winery with representation in more than 60 markets worldwide have taught me that you are only as good as the last vintage you’ve bottled.” When it comes to recommending what wines I should take home with me, it’s The Chocolate Block, one of the most successful brands out of South Africa, the Boekenhoutskloof Syrah, a wine that has consistently achieved awards across two decades, and then the Porcupine Ridge Syrah which, he says, illustrates how they produce extreme quality at a commercial level. “Oh, and perhaps our tiny production semillon from old vines lower down in the valley.”

Next on our itinerary is a visit to Waterkloof, the biodynamic vineyard owned by Paul Boutinot. After selling his wine importing business in the UK he invested in Waterkloof and brought his passion and dedication as an “entrepreneur-cum-winemaker” to the hills above Cape Town. He spends his time flying between England and the 120ha farm and vineyard.

He meets us, along with farm manager Christian Loot and winemaker Nadia Barnard, and we are bundled on to the back of a flatbed truck and bounced over rough farm roads high up in the hills, through beds of wild flowers and past the stables housing the giant percheron horses that work hard every day helping with harvest and farm duties.

Nadia, who has been at Waterkloof since its maiden vintage, says the key to biodynamics and organic farming is to keep it simple, to go back to the basics and not fiddle too much with the wines. “You cannot make exceptional wines from bad grapes and here we are working with low-yielding vines, which give us berries that are packed full of flavour. The end result is honest wines with beautiful concentration and lovely length.

“We strive to put extra thought into all aspects of the process, from planting to processing in the winery. Working the lunar and zodiac calendar is looking at the month-long orbit of the moon around the earth, it travels through each of the zodiac signs and stays there for three to four days. We take each stage into consideration for all of the processes of growing vineyards and making wine at Waterkloof. The lake and landscape at Ken Forrester Wines. Photo / Supplied

“The best time to plant is when the forces of the moon are not as strong and the gravitational force dominates to ensure that it establishes the vine in the soil by pulling stronger on the roots. A well-established vine will express terroir and varietal characteristics, which is what we as winemakers are always striving to show in a glass of our elegant wines.”

After our windblown tour of the vineyard we head to the impressive architectural masterpiece that juts from the hillside and houses the winery and the restaurant run by head chef Gregory Czarnecki. He has created a special degustation and our party make the most of the beautiful wines matched with a series of beautiful dishes.

There’s a glass of the Astraeus Moon and Stars Reserve Brut, followed by the Waterkloof Sauvignon Blanc 2017, which is served with tomatoes, basil, chive, rosemary and verbena. Other hits are the Mauritius Seabass matched with the Circle of Life White 2015 and the venison with the vineyard’s Circumstance Cabernet Franc 2015.

We discuss the growing demand for organic wine and people’s awareness of the importance of healthy soils in the battle against erosion and suspicions of the impact that pesticides and herbicides have to their health. “What is just beginning to be understood,” explains Stephen, “is the role that the soil’s microbiome plays in vine health and the resulting quality of the wine. More and more of the world’s most highly acclaimed wineries tout the benefits of organic and biodynamic viticulture.”

Our final vineyard on this tour is Porseleinberg which is part of the Boekenhoutskloof group but situated further afield in Swartland. To get here we leave behind the manicured vineyards and tourist cellar doors and follow dusty red metal roads that cut through farms of wheat, fruit orchards and vineyards that sprawl as far as the eye can see. 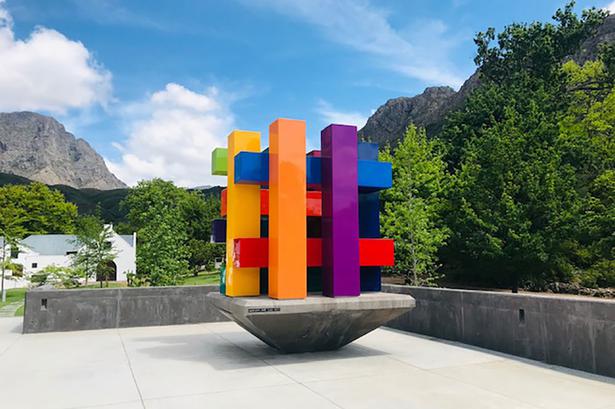 A sculpture by artist Anthony Lane takes pride of place at the Boekenhoutskloof vineyard. Photo / Supplied

This is remote countryside but the heat and terroir produces excellent syrah. At altitude and without the moderating influence of the ocean, the day and night-time temperatures are more extreme and this contrast allows a full range of flavours and aroma to develop while locking in acidity.

Porseleinberg takes its name from the kaolin clay in the soil, which was once used to make porcelain. There is, however, little top soil, mainly rocks. There are no fancy frills here. Renegade winemaker Callie Louw (described by South African wine writer Neil Pendock as, the Che Guevara of the Swartland) has set up a table in the tin shed where the wine matures in concrete eggs and large barrels for up to 24 months, and leads us through a tasting before cooking a few springbok venison sausages on the barbecue.

The Porseleinberg 2015 combines concentrated black fruit flavours with a savoury tapenade-like character and exotic spice and can be found on the Emirates First Class wine list. The property is certified organic and the vines grow alongside other crops, hens and cattle. The wine is made in an old-world manner right down to Callie printing the labels on a 1940 Heidelberg plate letterpress.

As we shelter from the heat in the shade of a tree and look out over the landscape, which is as wide as it is high, there is an overwhelming sense that we have only just scraped the surface of what this country has to offer the wine world.

An Art & Food-Filled Tour Of Rome With Gallerist Danae Mossman

How much have you absorbed from the world of wine this year? Take Jo Burzynska’s annual quiz to find out.