They’re the wicked stepsisters in Cinderella – but not as we know them. “Everyone keeps referring to us as the ugly stepsisters but we’re more like the fabulous fashionistas,” says RNZB’s Kirby Selchow. “We’re high society.” Kirby and fellow principal dancer Sara Garbowski have boldly stepped into the archetypal bullies’ rather more elegant pointe shoes and fabulous, couture-inspired creations by renowned costume designer Emma Kingsbury.

Like much of the upcoming season of the RNZB’s Cinderella, their onstage personas take an irreverent twist on the traditional. Naming them Madeleine and Nicolette after his own sisters, Cinderella choreographer Loughlan Prior suggested Sara and Kirby channel Alexis from US comedy Schitt’s Creek, whose sense of entitlement is as big as her designer wardrobe.

“They’re only slightly less evil than the stepmother,” says Sara, who plays older sister Madeleine. “But there’s a lot of comedy as well. I hope the audience get the essence of the negativity but then they’re relieved with a laugh afterwards.”

Cinderella has been a completely different experience from anything else they’ve done, say the pair. Sara, previously a member of the National Ballet of Canada in her home country, joined RNZB in 2017 and has danced in several notable roles, playing both Aurora and the Lilac Fairy in The Sleeping Beauty in 2020 and Neve in Loughlan’s The Firebird last year.

Meanwhile, Kirby, who is Australian, joined RNZB in 2014 and has (among many other high-profile roles) played both Carabosse and the Fairy of Curiosity in The Sleeping Beauty, and Gretel in Loughlan’s 2019 Hansel & Gretel. Having established themselves as traditional ballet heroines, they say they won the coveted bad girl parts in Cinderella as they’d both forged a great working relationship with Loughlan on past projects.

Off-stage, it’s been a sisterly experience, as they spend at least six hours a day together, from their morning warm-up class to the rehearsal studio. “Often ballet is a joint venture, especially in pas de deux work or amongst a group,” says Sara. “It is amazing in this production of Cinderella to feel like such a team- we can't do it without each other.”

Highlight scenes include a send-up of the traditional ’cygnets’ quartet from Swan Lake, along with the opportunity to flounce around in Emma Kingsbury’s outlandish costumes. Part of the performance even calls for a spot of playing Game Boys, the ultimate spoilt brat accessory. “There is a lot going on during each of these scenes, with so many props being thrown everywhere each time we do it, it can be completely different!” laughs Sara. 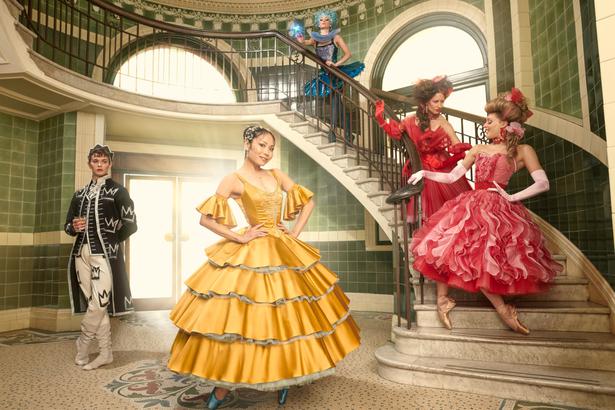 They’re relishing being the bad girls of the ballet, and say they’ve been given plenty of creative licence to co-create their obnoxious onstage personas, and bounce off one another on stage. “We have this really good banter with each other in the studio and on stage,” says Kirby.

“Sara’s such an intelligent dancer. If I’m stuck on something, Sara will say, how about we try this? Or why don’t we do it like that? We’ve been able to give each other ideas.”

Likewise, choreographer Loughlan has worked closely with costume and set designer Emma Kingsbury and composer Claire Cowan who has written a completely original score – the duo were part of the team behind 2019’s Hansel and Gretel, another larger-than-life production with loads of hilarious props and unexpected moments.

Ballet-goers can expect that same attention to the set design, projection and lighting on Cinderella.

“It should be on Broadway or something,” adds Kirby. “It’s different from your traditional classical ballet, your Giselle or Swan Lake. It’s not just about the dancing… If you have never been to the ballet before, come to this one! This is a show for absolutely everyone.”

Book tickets to see the Ryman Healthcare Season of Cinderella, performed by the Royal New Zealand Ballet at Aotea Centre, 10 – 13 August, and touring nationally at rnzb.org.nz