Blending old-world charm with a uniquely provocative eroticism, Ellen von Unwerth's photographs are a riot of fun and sly subversion Ellen von Unwerth can’t stop laughing. The German photographer, 63, is bouncing around the Taschen Gallery in West Hollywood in her sneakers, attempting to talk through the images from her latest exhibition and art book, Heimat.

“So heimat means Fatherland or Motherland or where you were born and where your roots are,” she tells me. “Bavaria is not my heimat, but we wanted to make a parody of the whole Bavarian thing.”

The whole Bavarian thing, apparently, involves supermodels frolicking nude in alpine meadows, performing suggestive acts with sausages, udders and holy virgins, sledging topless, spanking one another in dirndls and generally enjoying the fecundity and vigour for which the southern German slopes are celebrated.

“Oh, ja, it’s very sexual there, even the clothes they push up the bosoms and there are lots and lots of sausages,” she explains, laughing. “But you see so many images that are dark and depressing at the moment. All these sad women being sad. So I figured, let’s show girls having fun and enjoying life.”

Von Unwerth has a peculiar talent for getting famous and beautiful women (Claudia Schiffer, Madonna, Naomi Campbell, Rihanna, Kate Moss) to remove their inhibitions — and frequently their underwear — while retaining control. Her images are often provocatively sexual, but it’s usually her subjects who are doing the provoking.

“I always give them something to do,” she says. “When somebody’s not moving I get bored. I take two pictures and I say: ‘Great, I have it now.’ But I love the body in movement. I like the nude body in movement.” 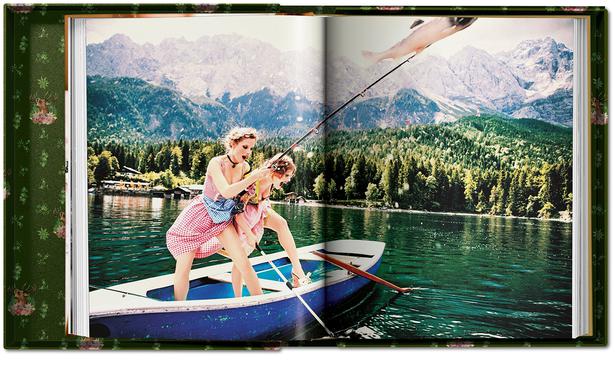 The fashion world adores her for this. You could tell from the raucous Heimat launch party, at which Arnold Schwarzenegger improbably rubbed shoulders with Yolandi Visser and most of the models from the shoot ended up jumping in a swimming pool.

Von Unwerth’s Instagram feed is also one of the few that make fashion weeks actually look fun. On International Women’s Day, the fashiony corners of Instagram were awash with tributes to her: “You bring fun, sexy, craziness to set. I always enjoy pushing my boundaries, embracing my femininity/sexuality and of course my personality always loud and proud when we work together,” wrote one model, Alexina Graham.

Another, Syrie Moskowitz wrote: “Ellen von Unwerth’s playful and empowering photos are such a joy to be a part of and I am so happy she is there to represent women in such a male-dominated profession.”

It is clear that everyone had a whole lot of giggles in Bavaria. Von Unwerth gestures towards an image of three women topless on a sled: “This model is Miss Russia and she brought a lot of vodka to the shoot. So they were drinking behind my back in the snow.”

Von Unwerth was born in Frankfurt in 1954 and grew up in an orphanage and a succession of foster homes. She has no recollection of her parents and not much inclination to reflect on their absence. “I was free from influence and I was able to take the best from everywhere. I don’t really have a heimat.” So her heimat is wherever she happens to be? “Exactly.”

She moved to Bavaria aged 16 to join a commune and later went to study in Munich. “On her first day at university someone said: ‘Hey, would you like to do a modelling job?’ And I turned around and never went back to university.” That led to a shoot for the German magazine Bravo, which in turn led to her being signed by Elite models in Paris. “I kind of hated modelling, but somehow I did it for 10 years. I was not really the exhibitionist type. It’s hard psychologically to be a model. And mostly people told me not to move when I was posing. I just wanted to be like the girls in my pictures now.”

READ: Gilles Bensimon on Supermodels and What Makes a Good Cover 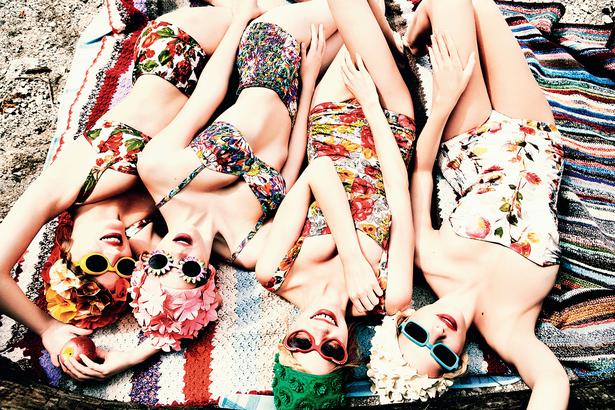 It was only in 1986 that she first started taking photographs herself — a boyfriend lent her his camera on a fashion production in Kenya and she ventured into a nearby village to shoot local children. “I came back home and showed them to my friends and they were like: ‘They’re really good, Ellen!’ Because models are supposed to be stupid. I was surprised myself because I wasn’t so interested in photography.”

Her images were published in the French magazine Jill, and she went on to shoot for i-D, The Face, Interview and Vogue, in the vein of her greatest influence Helmut Newton.

It was a shoot with the then-unknown Claudia Schiffer for French Elle in 1988 that made both of their careers. “She was a sweet girl and I didn’t think so much of it, but when I looked at the pictures, I called my husband [music producer Christian Fourteau] and said: ‘Doesn’t she look like Brigitte Bardot? The teeth, the eyes?’ Soon after we did the Guess jeans campaign and it was a jumpstart to my career.”

She also discovered Eva Herzigova (“she’s oozing with vitality”) and Nadja Auermann, and shot the infamous 1995 Playboy shoot that announced that Drew Barrymore was no longer the girl from ET. Von Unwerth has remained in demand despite the smartphone era cheapening the art.

“It’s not special any more to be a photographer,” she says. “Even when I take a picture, everybody stands next to me and takes the same picture. Five minutes later it’s on everyone else’s Instagram and I’m old news — so I’m forced to take pictures on my iPhone too.”

Von Unwerth tells me she can usually tell the difference between a photograph a man has taken and one a woman has taken. “But I find it crazy how women photograph themselves all the time. When I was a girl and looked in the mirror, my stepmother would come in and give me a slap. There was this idea that if you did that, the devil would get in you and steal your personality. Now everyone does this. I ask models sometimes, ‘Do you have to take so many selfies?’ And they say: ‘Only when I take selfies do I get likes.’ It’s sad! Narcissism is so celebrated in our society, sometimes people lose interest in other people.”

• Heimat by Ellen von Unwerth, about $1000, is published by Taschen as a collector’s edition of 1500 copies, each numbered and signed by the photographer