Inside the Magnificent Dior Exhibition in Melbourne Installation view of the world-premiere exhibition The House of Dior: Seventy Years of Haute Couture at the National Gallery of Victoria, Melbourne, Australia. Picture / Sean Fennessy

It is a sweeping 70-year archive of some of fashion history’s most beautiful and influential garments; a substantial collection of couture pieces that have made their way from Dior’s famed Parisian atelier to Melbourne’s NGV.

The House of Dior — one of Australia’s biggest fashion exhibitions to date — also showcases why, after all these years, Dior is still considered one of fashion’s crown jewels.

The exhibition is a big deal for the NGV and Melbourne, with media and influencers from around the world flown in to celebrate the official opening at the inaugural NGV Gala last month.

Milliner Stephen Jones — whose work features throughout the exhibition, having worked closely with the past three creative directors of Dior — charmed all with his knowledge and wit and wore a sequin beret. 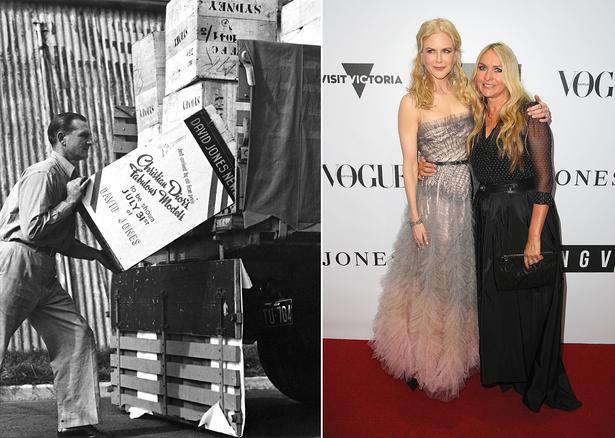 Dior boxes arriving in Sydney for the Christian Dior parade to be shown at David Jones; Nicole Kidman and Collette Dinnigan arrive ahead of the NGV Gala. Pictures / Sean Fennessy, Getty Images

Unlike those successful displays, however, The House of Dior has an obvious connection to Australia — presenting the designer’s affinity with the country when, in 1948, his couture designs were showcased in a fashion show at Sydney’s David Jones; the first time Dior had been presented outside Paris.

In the book accompanying the exhibition, president and chief executive officer of Christian Dior Couture Sidney Toledano writes of the “very special” relationship between the fashion house and Australia. “It is long-held, with deep roots, and punctuates the House’s 70 years of existence.”

At the media launch, Dior Homme president Serge Brunschwig explained the gallery had approached Dior four years ago with the idea of an exhibition — before the house itself had even begun thinking about the anniversary.

In July, a huge exhibition marking the occasion opened at the Paris’ Musee des Arts Decoratifs, with over 300 garments on show. 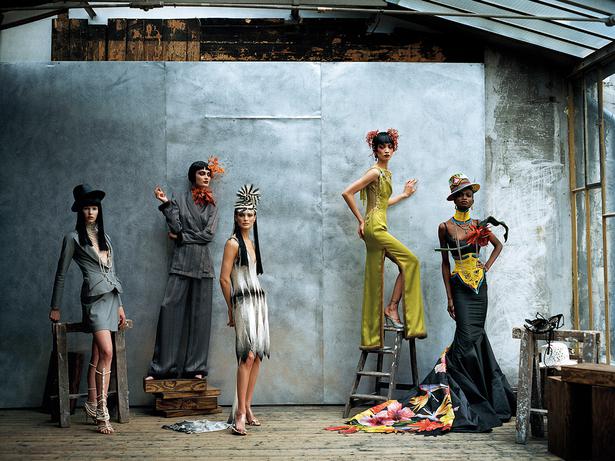 In Melbourne, there may be fewer looks — just over 140 — but the level of beauty is just as epic. As you enter, you are transported to Dior’s Parisian atelier, a long, dimly lit corridor with the famed Bar suit displayed at the very end — with its 12 metres of black pleated wool and sculpted cream jacket, it is a symbol of where the Dior story began.

Next is a room focusing on the work of founder Christian Dior, with a focus on tailored day wear — which he appreciated just as much as a glamorous gown.

“The suit is without doubt the most important piece in the female wardrobe, for it is the best adapted to today’s lifestyle,” the exhibition quotes him as saying, one of several eloquent featured throughout the exhibition that offer more insight into the creativity and thought behind each piece.

A jaw dropping, two-level space follows, with a sweeping staircase that draws on the one in Dior’s Parisian atelier. Here, gowns from the various creative directors of the house are displayed in four sections, defining the four codes that have come to define Dior — the line, flowers, the 18th century and the New Look.

The atelier is celebrated too, with a makeshift studio set up with calico toiles showing the intricate construction that goes into making couture. 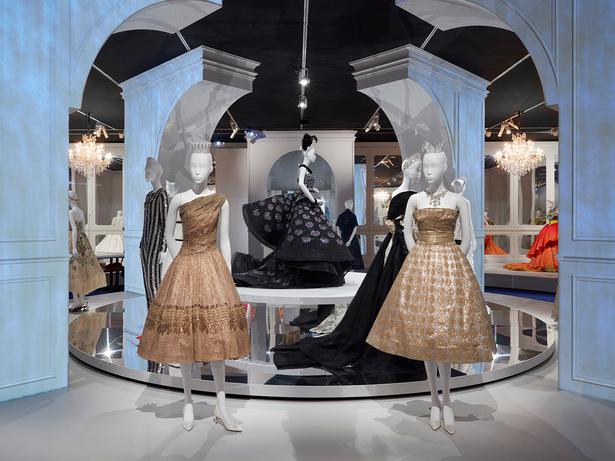 Installation view of the world-premiere exhibition The House of Dior: Seventy Years of Haute Couture at the National Gallery of Victoria, Melbourne, Australia. Picture / Sean Fennessy

Here, two women from the Paris atelier sit, chattering away and working on a garment — they’ll return to showcase their craft for the final week of the exhibition in November.

Another room, set up like a runway, showcases the breadth of work of the creative directors who have been at the head of the house following Dior’s passing in 1957: Yves Saint Laurent, Marc Bohan, Gianfranco Ferre, John Galliano, Raf Simons and Maria Grazia Chiuri today.

For a fashion nerd like me, it’s fascinating to play spot the designer. There are clear signifiers for each, who brought their own take on Dior.

But it’s a display of simple but striking garments that stops me in my tracks; a red wool skirt suit, black mini shift dress, mustard yellow silk faille gown and matching jacket offer a chic and minimal respite from the rest of the exhibition.

Designed by Marc Bohan, the pieces are symbolic of his time at Dior — designer for 29 influential years from 1960 to 1989, he was “representative of an era of restraint” at the house. Nicole Kidman's Dior dress (right) on display at The House of Dior at the NVG Melbourne. Pictures / Sean Fennessy

There’s a clear line between Bohan and Raf Simons, whose own take on Dior was similarly minimal and restrained (although slightly more fashion forward).

A final room is called, simply, Magnificent Dior, and presents some of the most spectacular gowns that help “reveal the transformative power of dressing up”.

A circular, moving centrepiece showcases an array of gowns — all sequins and tulle, taffeta and lace — a room in which you could spend hours taking a closer look at these show stopping-gowns.

Here you’ll also find one of the last additions to the exhibition: Miranda Kerr’s Dior couture wedding dress by Maria Grazia Chiuri, on loan from the Australian model who was married in July.

Only two dresses in the room are behind glass — older, more fragile dresses — and it’s ever so tempting to reach out to touch the embroidery and fabrics.

This being Melbourne, home of the Cup and the centre of Australian race wear, it seems appropriate that there is a room — dubbed the Top to Toe room — dedicated to Dior’s accessories; with a large number of hats from Stephen and the Dior archives. 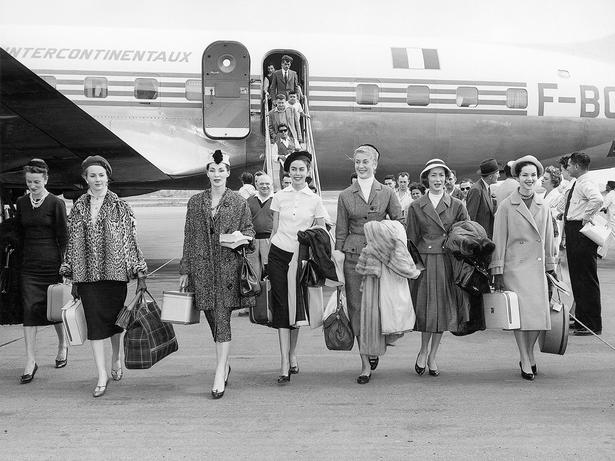 Arriving in Australia for the presentation of the autumn-winter 1957, haute couture collection. Picture / Supplied

It reflects the founder’s approach to dressing: as he explained in 1951:“The well-dressed woman will possess an outfit for every occasion; by the word ‘outfit’ I mean everything that goes to make up perfection, planned and thought through to the last detail, from the fur coat to the shoes”.

• The House of Dior: Seventy Years of Haute Couture is at the NGV International, Melbourne until November 7. Visit NGV.vic.gov.au

• The House of Dior exhibition partner Qantas flies direct daily to Melbourne out of Auckland and Wellington, as well as offering flights out of Christchurch. Every seat comes with food, drinks, a generous luggage allowance and entertainment. For flight information, visit Qantas.com

Get the Look: Dior FW16 Beauty