David Alsop is the director of {Suite} gallery, housed in a lofty heritage building on Wellington’s Cuba St. A dedication to both the preservation of art and fostering new talent makes the gallery a dynamic place. David has just opened a living museum devoted to NZ photographer Ans Westra. Emerging artist Emily Hartley-Skudder also has a studio space within the gallery and with David’s support, she will this year be showing at the Auckland Art Fair in May.

David holds a Bachelor of Social Sciences with a double major in geography and political science, and a Bachelor of Laws with first class honours.

“I was interested in geography and the world economy while at school and started by studying those subjects at university. I made the decision to study law after a couple of years, because I decided that I wanted to study something that was tailored to a specific profession.”

He began collecting art in the mid-90s while still a law student and the idea of a profession in art dealing started to play on his mind.

Off the back of a career in law, including a five-year stint in Amsterdam, David returned to Wellington in 2007 and {Suite} was born.

Time abroad has resulted in a home filled with Dutch, Belgian, Danish, Swiss and Japanese furniture collected from his travels. “For me, good design, form and function go hand in hand. I love objects that work as they’re intended to work. We live among these items and adore them every day — using and looking at them makes me happy. I’d much rather have one well-made, beautiful item that will last for 30 or more years.”

The same functional ethos applies to David’s dream house. “I would want the house to make living easy — not just in terms of layout but also using in-built furniture to create atmosphere; streamline and simplify.” 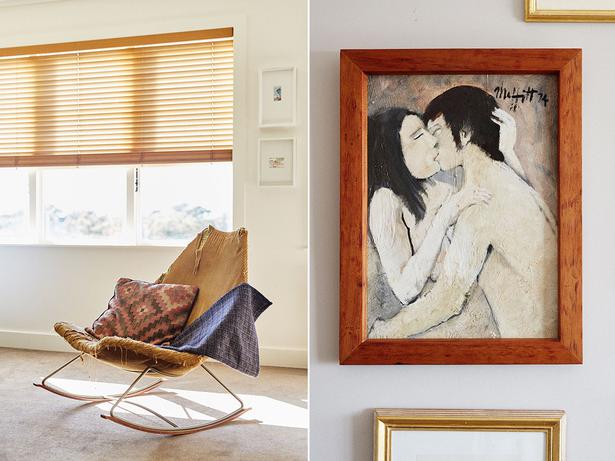 1. Geoffrey Harcourt Rocking Chair for Artifort
It was love at first sight when I saw this chair in the window of a vintage store in the canals of Amsterdam. The store owner took some convincing to part with this, because it had been accepted for a 20th Century design auction at Sotheby’s in London. The chair was one of 20 prototypes made with rocking legs before production of the chair commenced in the late 60s with a swivel tulip base. Still with original fabric, this is the most comfortable piece of furniture I’ve encountered.

2. Thank God You’re Home, 1974, by Trevor Moffitt
This was the first significant artwork I bought in the mid-90s on a law clerk salary, at a time when I couldn’t really afford to own it! A workmate’s partner stepped in soon after and purchased the work from me on the understanding that I would want to buy it back one day, which I did, in 2010. An expensive way to own something you love!

3. Wayne Youle painting of Ans Westra
Wayne and Ans are two of my favourite people. This work is part of a series of portrait works of celebrated New Zealanders, and is easily one of Wayne’s best-ever paintings. The image is based on a 1963 portrait of Ans Westra made at the Rembrandt studios in Cuba St (just down from the gallery). He’s rendered her in camouflage and with gold eyes so when you walk near the work she has the appearance of looking at the viewer –genius. This usually hangs proudly in our family room but is currently on loan for an exhibition in a brand new art project space in Hastings, ‘Parlour Projects’.

4. IWC 1972 Automatic watch
I’ve got a thing about owning things made in my birth year. I’m not quite there with vehicles but do have a watch that’s as old as me. Purchased in Amsterdam, the watch was brand new and in its box when I discovered it. It had been sitting in a watch maker’s store room for 40 years before the store closed and his stock was made available through another store.

5. 18th Century Delft Tile
A treasure collected while living in the Netherlands, this is an original tile from 18th century Delft (Netherlands). Having recently sat through several screenings of Girl with a Pearl Earring with my children, it’s nice to reflect on the history of an item like this. The tile is delicate, sentimental and useful: we often use it to sit the teapot on.

If you're in the area, make sure you pay a visit to these Wellington galleries

Where to Eat: This That Cafe

This new cafe-gallery opens in central Auckland this weekend