The general manager of fundraising and marketing at Pet Refuge, a new shelter for pets affected by domestic violence, shares her most adored objects

Sophie Mowday is part of the team behind Pet Refuge, a new shelter set to open that will provide temporary care for up to 500 pets a year, removing one of the barriers that prevent victims from leaving domestic violence. The service was born out of new research from Women’s Refuge revealing many women delayed leaving abusive relationships to protect their pets.

New Zealand has the worst recorded rate of domestic violence in the developed world and while most victims are women — men are also affected.

“People are staying in violence to protect their pets when they should be leaving,” says Sophie, who is general manager of fundraising and marketing at Pet Refuge.

“A woman came forward and said she would have left an abusive relationship after six months, but instead stayed for six years until her cat passed. She wasn’t going to leave it behind. We are focused on removing that barrier. There’s lots of them and this is one.”

Pet Refuge is the brainchild of KidsCan founder and chief executive Julie Chapman. It was launched via a Pledge Me campaign in May with a target of $250,000 to help pay for the internal fit-out. The initial target was exceeded in eight days and in all $300,702 was raised in four weeks, with donations from across the country. The majority of funds for the initial building set-up were donated by the Lindsay Foundation.

“We were completely overwhelmed by the generosity and support of New Zealand. I think a lot of people don't realise that pets are such a huge part of domestic violence. New Zealand has the second-highest rate of pet ownership in the world with 64 per cent of households having a pet," says Sophie.

"When you couple that with the domestic violence stats, pets are part of the family and are being abused. Pets are used as a means to control the victims which can involve awful things being done to animals including torture, killing, threatening and intimidation. Often pets would have been a support to victims through the abuse.”

Pet Refuge is expected to open in the Auckland area in April next year and will house up to 24 dogs and 35 cats, along with a small number of rabbits, guinea pigs and birds at any given time. The service is available for victims nationwide and will operate alongside Women’s Refuge, which will make the appropriate referrals. The location of the refuge will be kept confidential for safety reasons.

Sophie’s career began in advertising at agencies DDB and Colenso. An overseas stint volunteering in Kenya at a local school and with a women’s sewing programme then steered her into a new focus working for not-for-profit groups.

Sophie returned to New Zealand to do a short contract with the Leprosy Mission and started at KidsCan in 2014 as brand and sponsorship manager and general manager of fundraising and marketing. She’s now working part-time at Pet Refuge and looking after her children.

Sophie describes Julie as a “good friend and fellow animal lover”. They share the emotional hardships of the job.

“It can be quite heavy at times. It was similar to the injustices that were happening when I was at KidsCan. Julie and I are able to talk and support each other. It always comes back to the fact that we are going to help these people and animals. It makes us even more passionate about it,” she says.

“It’s upsetting and unacceptable that pets who give us unconditional love and are completely innocent are drawn into the violence. Even if we help one family escape violence it would make it worth it.”

“She’s such a great addition to the family and has helped one of our kids overcome her fear of dogs. She has such a gentle nature and loves to go for a big run on the beach. Ruby loves company.” 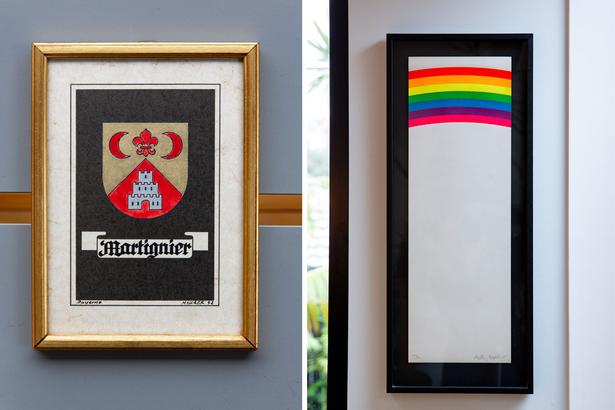 1 Family shield
I have Swiss heritage from my father’s side and this is our family shield. It’s a nice piece of artwork but also a reminder of my heritage and my family, some of whom are still in Switzerland.

2 Billy Apple artwork
I love this bright fluoro artwork. I think rainbows are such a beautiful symbol of light and colour and this brings them into our home.

3 Poetry book
I struggle to find the time to read books, but you can instantly escape into poetry. The gentle rhyming slowly takes you away. This book of poetry by a Russian author is one of my favourites.

4 Quartz crystal
I used to collect crystals as a child and had a big collection in a big frame. More recently my husband gave me this large piece of smoky quartz, which sits in our living room. It’s nostalgic because I used to collect them and think they were so magical as a child, but I still think they have real spiritual qualities. Quartz is known for having a stress-reducing and calming effect, which I think we can all benefit from. 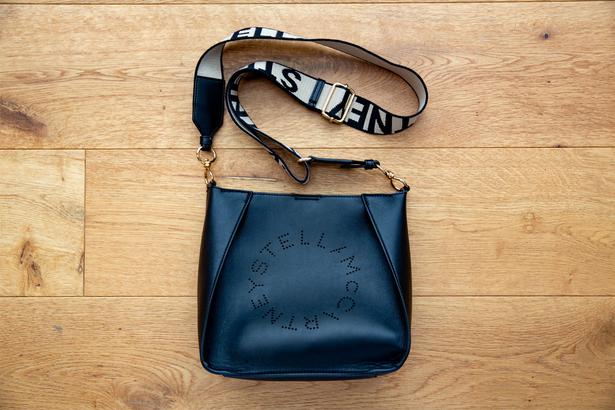 5 Vegan handbag
My husband and I went to the States recently and I was on the hunt for a vegan handbag. In the last few years I’ve made the ethical decision not to buy leather. It’s quite hard to find a stylish bag that isn’t made from leather. I’ve found Stella McCartney does beautiful vegan bags so we went to her store in LA and picked out this one.