There’s an intimacy to Solomon Mortimer’s portraits of individuals, most of whom first catch the artist’s attention on the street. It’s thanks to his film camera, he reveals, gesturing to a chunky black beast. The Mamiya RZ with a 110mm lens has been in use since Solomon’s second year of undergraduate study and recommended by his tutor at the time, photographer Allan McDonald.

“Its waist-level finder is a huge plus for maintaining a close relationship with the person who is being photographed,” he says. “Because my face is unobstructed by the camera, I can hold eye contact and the conversation flows much more freely.”

Solomon, now 27, has been immersed in photography for the past 10 years. He’s known for making books and zines in small print runs to accompany exhibitions, many of them combining his subjective, everyday encounters and signature self-portraiture captured on his trusty Mamiya. Solomon often collaborates with his partner and performance artist Zahra Killeen-Chance. He was one of 10 recipients of Arts Foundation Laureate Awards in August, receiving the Marti Friedlander Photographic Award.

Solomon first started using his camera as an excuse to talk to people on the street. Despite no previous interest in photography, after he was given a camera during his first year of graphic design at Unitec, he soon switched his major to photography and media arts.

“I guess I was going through the classic teenage angst of finding my place in the world,” he says. “I thought that by using the camera as a reason to talk to people, I could learn about options that were out there for me. The camera was almost secondary to our engagement but it was a good reason to go up to people.”

He also tried self-portraiture as a means to locate his own sense of identity. Solomon had just inherited the wardrobe of his late grandfather — wacky tracksuits, robes, and bizarre glasses. Aside from remembering his grandfather, the self-portraits introduced the humour seen in his work.

“I made up an alter ego, Donavon Pinkerton, for the self-portraits in my grandad’s clothes,” he says. “There’s one of me posing atop the roof of Zap Thai in Point Chevalier in an Adidas tracksuit with some rather distinctive sunglasses.”

He began making books as a shortcut for constructing visual diaries, a required component of his photography programme. “I realised I could exploit my skills in InDesign and use the cheap campus copy center to print my own visual diary,” he says. “It was a much faster and more visually satisfying result.”

In recent years, Solomon’s photography has been exploring more cropped and formal compositions.

Landscape gardening work supplements his art practice. Solomon and Zahra’s first child, a daughter named Frieda, was born this month — “the significant attention holder in the immediate future”, he says.

He hopes, however, to have a new book completed early next year. 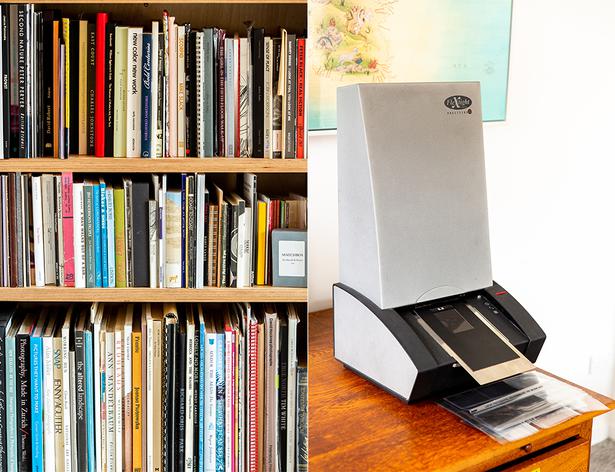 1. My library
It gets better every week as I scour the Internet and bookstores for new gems and old classics. It is pretty evenly weighted between international and New Zealand artists. It is a great reference library that provides refreshing reminders of just how good a well-rounded book can be

2. Imacon Precision III film scanner
It may be old and slow but it gets the results. This allows me to generate high-resolution digital files of each photograph so I can achieve quality reproductions for my exhibitions and books. 3. Untitled #5 by Joanna Piotrowska
I was introduced to her work while researching the publishing scene in Warsaw, Poland. She won the MACK First Book Award in 2014 with her book Frowst. After a thorough selection process with her gallery I chose this photograph, which is a beautiful silver-gelatin, mural hand print. Coincidentally, it was exhibited at the Tate Britain this year.

4. A Cribbage board
It’s a game with a great pace and length and in my experience, a pretty even amount of skill and luck. This particular board has a nice selection of native timber inlays. I play as often as possible with my father and also a fellow artist Anton Maurer. It’s a great way to mull over ideas and the board fits in my jacket pocket. 5. A 1980 Wayne “Rabbit” Bartholomew surfboard
It’s a 5’ 9” board, full of water and some crusty repairs but still paddles like a canoe. I acquired it from my high school P.E. teacher who wanted me to fix a ding on the tail so he could turn it into a coffee table. I thought that this sounded barbaric and so I held on to it, and I still surf on it all these years later.