Sulieti and Tui returned to the village of Falevai for a collaborative art project. Picture / Rebecca Zephyr Thomas In the old days on Falevai, a small settlement on Tonga’s Vava’u islands, the constant beat of women making ngatu, or tapa, echoed across the village.

“I used to watch my mother every day when I was a child,” says Sulieti Fieme'a Burrows. “You could always hear the tap, tap, tap of feta’aki on the tutua (wooden block).”

The richly patterned cloth comes from the inner bark of a mulberry tree, first soaked and then pounded with an ike (wooden mallet) until it forms a soft fabric-like paper called feta’aki. Once painted with natural dyes rubbed over hand-cut stencils, it becomes ngatu.

Sulieti has carried on the craft since moving to Auckland in 1978, and like her mother, she has passed down the artform to her daughter Tui Emma Gillies, who is now a full-time artist.

Inspired by a trip to Falevai in 2014, which was Tui’s first visit to Tonga, the pair have been on a mission to revive what has become a dying art back in the islands. Creating tapa had not been practised in the village for several decades. Its workhouse and tools had been abandoned and the mulberry trees had rotted away.

“It was a shock when I returned and it was no longer alive,” says Sulieti, who hadn’t been home since her mother’s death in the 1980s.

So, the mother and daughter rounded up the high-spirited local women, who all marked the occasion by wearing kahoa flower necklaces, and started the rigorous process of creating two large ngatu. They improvised on a make-do cloth bought from the Nuku’alofa market, which made it safely onshore wedged aboard the only transport to the isolated community: a small leaky boat.

“It was incredible listening to them singing the old work songs as they got into it,” says Tui, who thinks her mum’s village is the source of her artistic talents.

For Sulieti, returning the value of the treasured possession was quite a moment. “It seemed so strange to be the one keeping the fire alive by passing it on to Tui and eventually, passing it back to the people of Falevai.” 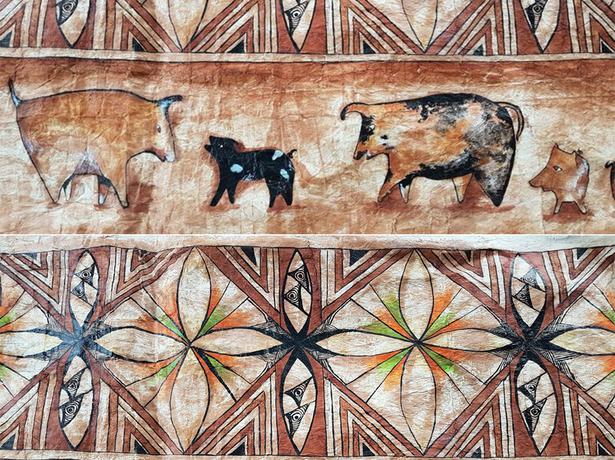 The exhibition Falevai Flava on display at the Mangere Art Centre. Picture / @Aklfestival

The resulting work, Falevai Flava, was presented at the University of Vienna and the Museo de America in Madrid in 2015, and exhibited at Mangere Arts Centre this year as part of Auckland Arts Festival.

Sulieti and Tui are currently back in Falevai for another hands-on project until the end of May. They hope to learn even more about the tapa-making process from a relative who is a master teacher. In between visits, however, production hasn’t stopped and a healthy crop of mulberry trees now grows.

The duo’s shared passion and close relationship makes them feel more like best friends than mother and daughter, says Tui.“We have worked in the same space since I can remember. Sometimes we annoy each other or bicker, but we don’t hold grudges. I feel very grateful I was given her as my mother.”

Tui first followed Sulieti’s lead in the studio but now moves tapa into a contemporary space. She has traded in typical black and brown for brighter colours and uses provoking imagery. It was a shock initially for her “modest Tongan” mother, says Sulieti but she’s “always convinced in the end”.Tui has earned the right to turn away from tradition, her mother says. “She’s never really painted on anything else. Tapa was always her canvas.”

Tui says its influence came from childhood. Her bedroom walls were covered in her grandmother’s ngatu and soon her own creations sold at Sulieti’s tapa stall at the Otara Markets.“When I paint, I believe I am being guided by my Tongan ancestors,” she says. “Sometimes weird things come out of my paintbrush and I always hold them responsible.”

Sulieti is always waiting to see what she will come up with next. “Once her brush touches the tapa cloth magic begins to happen.” 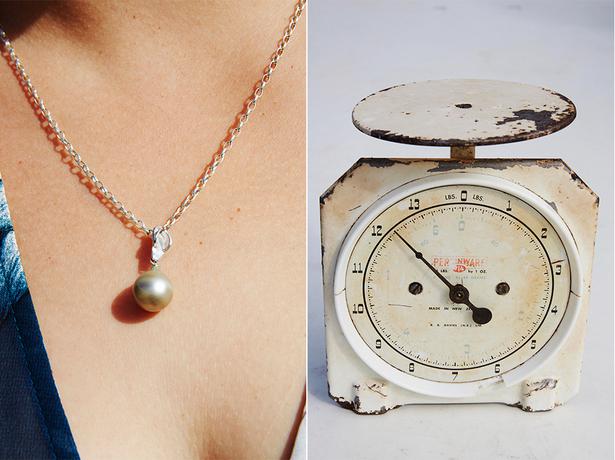 1.Pearl necklace
Tui: I bought this recently in Rarotonga. It is set in a silver jandal. To me, it captures everything I love about the Pacific — the sea, the sun, nature, and the casualness.

2. Baking scales
Sulieti: These are my favourite vintage New Zealand-made scales which I use every time I bake. My real talent is making cakes. I’ve worked out a way to use less sugar without lessening the flavour. I love to give the cakes to people and watch them as they enjoy. 3. Fine mats
Sulieti: These fine mats belonged to my mother, Ema Topeni, who made them. They are more than 60 years old and is a treasure that I am happy to have. They will be passed down to my daughter, Tui, then to her daughter, Aroha, and so on.

4.  Kauri art table
Tui: My art table is made out of 2000-year-old swamp kauri. It is very, very old! It was actually donated to the St Vinnies op-shop by a person who very much wanted its new owner to know how special and old it was. We only paid $250 for it — a bargain — and it now stands in my own art studio at our home in Kawakawa in Northland. I love it. 5. Ko ‘etau Fanga Kui tapa
Tui: This is a new piece that Mum and I did together. It’s called Ko ‘etau Fanga Kui (Our Early Ancestors) and was part of the Falevai Flava exhibition in the Auckland Arts Festival. The piece was based on the impression left on me after viewing the oldest intact tapa cloth in the world, known as Malaspina’s Carpet, in the archives of the Museo de America in Madrid. Some researchers believe the piece was made in Falevai and I could see many faces in the tight weave-like patterns. This was a very profound and emotional experience that influenced this new piece that was painted on many squares of tapa cloth that Sulieti had sewn together.