See the documentary 'Yellow is Forbidden' this weekend at Aotea Square. Photo / Supplied Pietra Brettkelly’s illuminating documentary Yellow is Forbidden, on the enthralling Chinese designer Quo Pei, charts her breaking into the opulent world of haute couture. It’s a story of mettle and of artistry, and an intimate portrait of one of the industry’s most talented dressmakers. The film will be screened free in Aotea Square at 6.30pm on Thursday, February 11, as part of the Summer in the Square programme. 291-297 Queen St, Auckland Central.

Shoot a bow and arrow at MOTAT

A promise of disorder, archery and wine: The Museum of Transport and Technology is running its R18 anti-Valentine’s Day affair, complete with bow-and-arrow shooting, karaoke, cocktail-making classes, comedy, live music and more. Saturday February 13 from 7pm to 11pm. Tickets range from $15 to $20 and are available here. 805 Great North Rd, Western Springs, Auckland.

Have street kai on Takutai

For one evening only, some of the tastiest trucks in town — Brooklyn Dogs, Grownup Donuts, Hapunan (the People's Choice in the recent Street Kai Awards) and much more — will be slinging their goods downtown. A collaboration between The Food Truck Collective and Britomart, tuck in and enjoy some live music while you eat. Friday February 12. Britomart, Auckland. 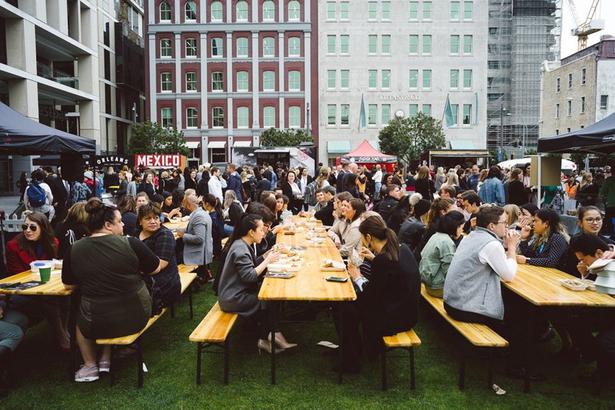 Enjoy fare from a host of food vendors in Britomart. Photo / Supplied

Wellington’s neo-soul singer is melding his mellifluous vocals with the Auckland Philharmonia Orchestra for one night only. Hear old and new music from Louis Baker, to the beat of a 70-piece symphony. Tonight, Thursday February 11, from 8pm to 10pm. Tickets are available here. Auckland Town Hall, Queen St, Auckland Central.

Bedeck your two-wheeler with lights and a speaker and take part in Bike Rave 2021 – The Sundowner Edition. Meet at the corner of Ian McKinnon Dr and Upper Queen St for a carpark party at 6.30pm before cycling 6.5km through the sunset. The event is free, and runs this Saturday, February 13, from 6.30pm to 9.45pm.

Scoop up a few bargains

It was with a heavy heart that retailer Rein announced its closing, foregoing its stocking of international brands like Atoir, Bali Tailor, Bear, Bec & Bridge, For Love & Lemons, Jasmine Alexa, and Friend of Audrey, and choosing instead to focus on its label, Rein Label Clothing. To mark this change, Rein is having a closing sale this weekend, with up to 90 per cent off in store on Friday, February 12, from 10am to 3pm; Saturday, February 13, from 10am to 2pm; and online now.

Dine, dance and talk delestage at this fine festival, on at Waitangi Park this Saturday, February 13, from 11am to 7pm. There's a full line-up of food vendors (House of Dumplings, La Belle Waffle, Boquita, Hot Sauce, Rogue Burger, among others) and live muscians (Sofia Machray, Anna Coddington, Miles Calder, Delaney Davidson, The Relatives).

This super-sized party in the sun kicks off at Coyle Park from midday on Sunday February 14 and runs until 7pm with a full line-up of hosts (think Tom Sainsbury and Alice Snedden, China Gonzalez and Monty Montgomery), performances (LA-based pop singer Chelsea Jade is headlining) and DJ sets (Kirsty Sutherland, Native Bush, Marjorie Sinclair, Nicola Tims and the unapologetic Half Queen joined by Coven will be behind the beats).

The brainchild and solo performance of non-binary poet and movement artist Cypris Afakasi, this show — part-activation dance experience presented by the Coven Arts Collective and developed with the help of the inimitable Moe Laga — is poised to test the bounds of our understanding of gender in an original story of death and rebirth. On at 8pm daily until Feb 13 at Basement Theatre.

Actor, activist, artist and drag queen Medulla Oblongata will be running a free 1-hour tutorial on how to glam your face. Saturday February 13 from 11.30am to 12.30pm at the Onegunga Community Centre. 83 Church St, Onehunga.

See Chas Foxall's photographic coverage of early Hero Parades, which showcased vibrant, ebullient floats down Queen St and, later, down Ponsonby Rd. The archive is available to view at Studio One Toi Tū from 9am to 5pm until Saturday February 20. 1 Ponsonby Rd, Grey Lynn, Auckland.

A post shared by Studio One Toi Tu? (@studioone.toitu)

He Kōrero Ātaahua: A Conversation with Reuben Paterson

For rose-lovers and the rose-averse, there's no shortage of flowers to pick in Auckland for February 14