New Exhibition 'Are We There Yet?' Explores Gender Equality In New Zealand

It’s Wednesday night at Auckland Museum and Helen Clark is introducing an important new exhibition to mark 125 years of women’s suffrage in New Zealand. She has the crowd roaring with a story about the late Sir Robert Muldoon.

When asked what was the greatest change he’d noticed during his time in Parliament, “he said words to the effect of ‘All these women!’” Clark tells the audience, before adding: “But we did do our best to make his life miserable.”

Clark was one of just four women in Parliament when she entered in 1981, with so few female ministers before her she could almost count them on one hand — women like Whetu Tirikatene-Sullivan, Mabel Powers and Dame Hilda Ross. A decade later the number of women in government had climbed from under 10 per cent to 20 per cent, growing again after the introduction of MMP in 1996 but by no means at speed. 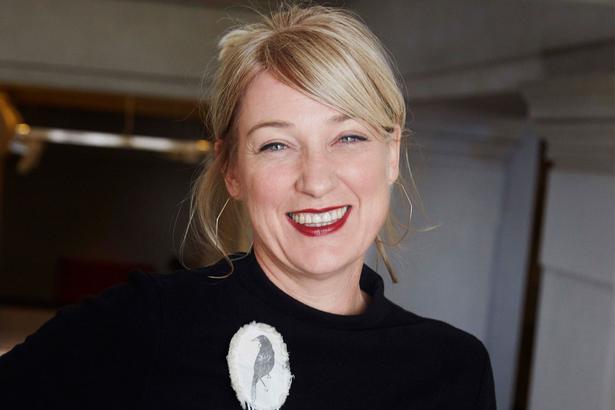 “Today, at 38.7 per cent you can see parities are within grasp,” said Clark. “It’s going to take another push but it’s possible. Do we need to keep advocating for gender equality? Of course we do. Across society, in our decision-making bodies, from Parliament to councils, to women on boards, in private and public sectors.”

And as the former Prime Minister went on to give a shout-out to Jacinda Ardern and her partner, who intends to be a stay-at-home dad, it’s not hard to imagine Muldoon being aghast once again.

Are We There Yet? — Women and Equality in Aotearoa is an exhibition examining how far we’ve come in the 125 years since New Zealand became the first country to give women the vote. 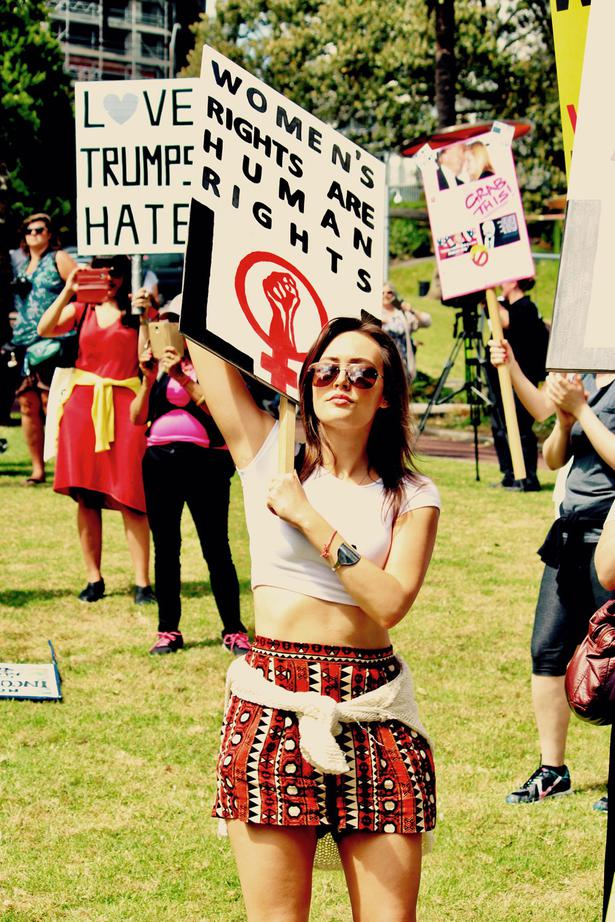 As well as the history, context and mobilisation of the trail-blazing movement, elements like intersectional feminism, body image, reproductive rights and online trolling are addressed. Women are encouraged to leave a note confessing to feeling like “bad feminists” or leave a compliment for a stranger.

For Victoria Travers, head of exhibitions at Auckland Museum, the exhibition title is rhetorical. “It’s amazing how many people don’t realise that it’s sarcastic. The minute you start looking at the stats and data you know how far we have to go. The strongest thing we can do is put the data out there, and we don’t need to say a word.”

Travers and a team of six staff have been working on the exhibition for just over a year, and found its kaupapa created a unique sense of unity. “This has been a really remarkable experience in terms of the bond we’ve made and the conversations we’ve shared as a result of the show.”

Along the way there were wins for women in New Zealand, like the landmark settlement awarded to equal pay campaigner Kristine Bartlett. “That legislation got through while we were working on this and we recognised early on that it would be foolish to just do a historical show celebrating what women had achieved 125 years ago. It was really important to reflect, and it’s all in the title.”

There wasn’t going to be an exhibition on suffrage without recognising the early pioneers of the movement. The walls of the museum are lined with images of Kate Sheppard, Elizabeth Yates and Meri Te Tai Mangakahia. “There are some women that people won’t know,” says Travers. 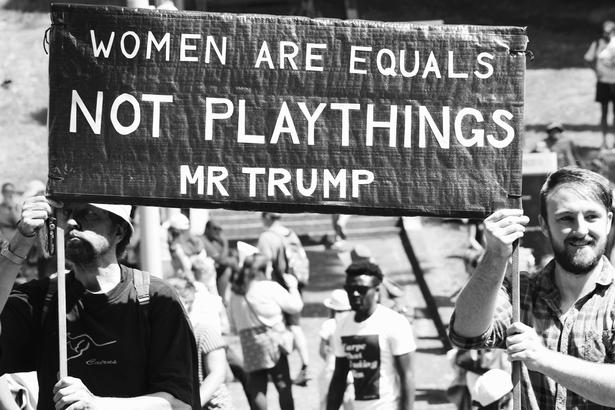 “Meri being one of them. She was an extraordinary woman and leader. She was a suffragist and recognised as such by the WCTU [Women’s Christian Temperance Unit] but she was asking for more than that — she wanted women standing in Parliament. Her mission was about women being leaders and I think that really resonates as a woman living in 2018, because that’s where the conversation lies now.”

These suffragettes sit alongside icons such as Dame Whina Cooper, Donna Awatere and Helen Clark, and protest images by documentary photographers Robin Morrison and Gil Hanly. “Every protest, Gil has been there,” says Travers. “The documentary evidence she has captured over her life is such a gift to the nation.”

There’s also a short film made especially for the exhibition by Gaylene Preston.

Elsewhere in the exhibition hang portraits of 30 women alongside a quote from each. “It creates the effect of being literally surrounded by these women and the things they’ve experienced,” says Travers.

Refreshingly, the portraits represent a breadth of women across a number of fields from activism and politics to sport, business, science, arts and culture. Women like young business leader Alexia Hilbertidou, who’s working to encourage women into leadership roles. 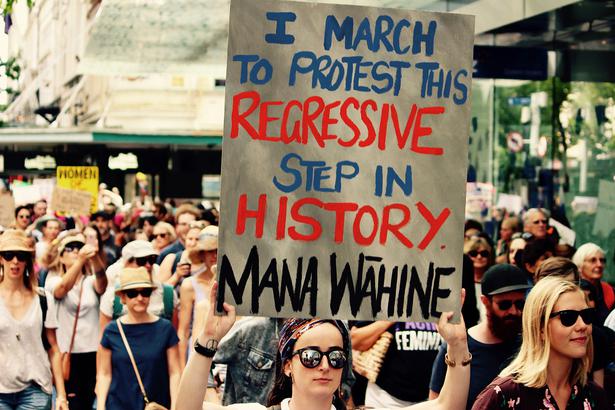 Or film-maker, presenter and writer Ramon Te Wake whose lifelong aim is to champion the underdog through her work. “If trans women are included in the evolution of women in Aotearoa, then that’s a great thing,” says Te Wake. Women like Theresa Gattung, Louise Nicholas, Sharon Hawke and Jenni Shipley “sit in a lovely juxtaposition. I’m proud that there’s not just one Pasifika woman, or one trans woman or young woman,” says Travers.

“Because I want two things for women who come through this space. For them to feel they are somehow reflected in the women they see, or a story that is similar to their experience. The other thing I want is for them not to feel judged for the choices they’ve made.”

So, how far have we come? As Travers has suggested, the numbers say it all. The data section of the exhibition, created in conjunction with Figure NZ, points to a number of disparities faced by women. The gender pay gap is sitting at 9.4 per cent, and there is 17 per cent pay parity between mothers and fathers in the workforce.

Women are still under-represented in leadership and management roles, with only 18 per cent of businesses employing a woman in a senior management role. New Zealand has the highest rate of family violence in the world, which Clark calls “one of the most pernicious barriers to gender equality”, and one in five women will experience a sexual assault. 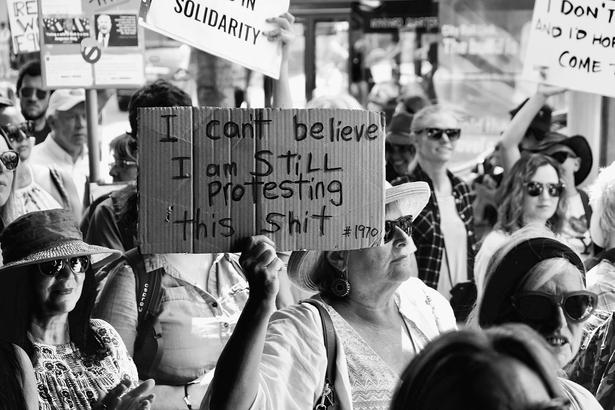 “Then there are stats like 46 per cent of women having a negative thought about themselves before 9.30am,” says Travers. “And I’m one of them. Hopefully a lot of people coming through the exhibition see the power of that information and come to their own conclusion on whether we are there.”

If these figures are disheartening, that’s not the point of the exhibition. It’s the dialogue that matters. “I’m proud of the conversation that we’re contributing to,” says Travers. “And I’m hopeful. When I hear young women talk about equality it’s very different from the way I was talking about it at that age.

My daughter and son call out sexism all the time. Misogyny is still rife but it’s called out now and it’s widely acknowledged that it’s not okay. We’ve still got a long way to go and some hard fights ahead of us.”

Back in the auditorium of the museum and Clark is summing up her speech.

Get in formation! People around New Zealand will join forces on Saturday to kick off worldwide sister marches with the Women’s ...