The Nitmiluk Gorge is a place steeped in Aboriginal lore, which only serves to make the experience of this natural wonder even more magical

The Jawoyn people are the traditional owners of Nitmiluk (Katherine) Gorge, and in their language the word ‘Nitmiluk’ means ‘Cicada Place’. Nabilil, an important figure of the Creation Time, is said to have come to the gorge on his travels and observed the song of the cicada, “Nit, Nit, Nit!”

The story of Nabilil and others, such as Bolung — the rainbow serpent who is believed to still inhabit the deep green pools of the second gorge at Nitmiluk — are just part of the ancient cultural context you’ll be immersed in on one of Nitmiluk Tours’ excursions. The company is 100 per cent Aboriginal-owned and is the exclusive provider for touring the park, bringing this grand waterway to life, by boat, canoe or helicopter with a Jowoyn guide.

The Nitmiluk Gorge sits within Nitmiluk National Park, just a three-hour drive south of Darwin. It winds along 12km of sheer rock extending more than 70m high, with a maze of waterways sculpted from the sandstone by the Katherine River over countless millennia.

You’ll want to take your time exploring everything the gorges have to offer — ancient cave systems, Aboriginal paintings dating back thousands of years, and unique wildlife and flora — so luckily there’s a range of accommodation within the park to suit every budget, from campgrounds and upmarket tenting, to self-contained chalets or the boutique option of Cicada Lodge. 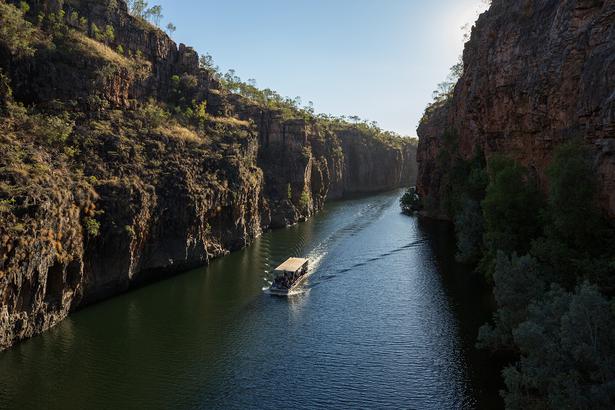 An aerial view of all 13 gorges is a great way to get the full impression of the scope of this awesome natural wonder. Choose a helicopter tour and you could be setting down to refresh yourself at a remote waterfall, enjoying a swim in the pristine rock pool at its base.

Meandering the waterways on a boat cruise is a slower-paced way to absorb the wonderment of your surrounds. The Nabilil Dreaming Sunset Dinner Tour is especially tranquil as it lets you witness the changing colour of the sandstone cliffs as the sun sets, while being served a three-course candlelit dinner.

But if it’s action you crave, a canoe trip will fit the bill. Boat through Nitmiluk’s first gorge and then you’re on the water yourself, canoeing through the second gorge and beyond, where lush hanging gardens create an almost rainforest-like atmosphere.

You can overnight too, canoe in tow, but be prepared to transport your canoe across the rocks between gorges — which is totally worth it to sleep under a dazzling celestial display. 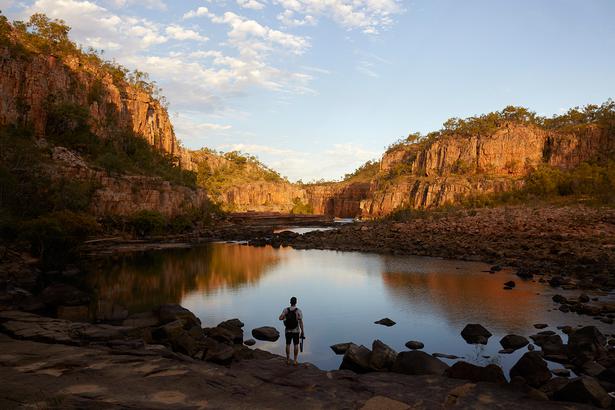 Hiking enthusiasts might want to tackle the Jatbula Trail, a 62-kilometre one-way walk departing from Nitmiluk Gorge and finishing at Leliyn, also known as Edith Falls.

The trail is named after Jawoyn Traditional Owner Peter Jatbula — who was instrumental in securing land rights for the Jawoyn people — and on the hike itself you’ll be walking in the footsteps of generations of Jawoyn people. Prepare to have your breath taken away, quite literally, as you follow the western ridge of the Arnhem Land escarpment over a sandstone plateau, and on through woodland, open forest, monsoon forest and riverine landscapes.

More footsteps can be followed on a cultural tour, where you can try your hand at spear throwing, basket weaving, fire lighting and playing the didgeridoo. But it’s the stories that will stay with you, like that of Bolung, the rainbow serpent lurking in the depths of the second gorge who, the Jawoyn insist, should be left undisturbed.