It’s usually bears and bulls that get a mention when talking investing. Today it’s a dog.

Midway through a Zoom chat with Viva, while talking about the importance of closing the gender wealth gap by making investing more accessible to women and minorities, Simran Kaur excuses herself to reprimand her pet as it proceeds to mess up her bed in the background, her best mate Sonya Gupthan suppressing a giggle.

It’s just the type of thing that would happen on the Kiwi pair’s wildly successful podcast Girls That Invest. Armed with their passion for all things investing, a willingness to divulge their personal experiences in the sharemarket and a desire to demystify what they see as an often impenetrable and intimidating world of jargon, it’s their relatable authenticity — the kind of dry humour and good-natured “bickering” that can only come from 20 years of friendship — that has helped to propel their money chats up the business podcast charts both here and overseas.

From their low-fi beginnings in August 2020, broadcasting from laptops set up in their bedrooms, Girls That Invest has become the number one financial podcast in New Zealand; last year it also reached the top spot in the Apple business podcast charts in the US and Canada, and number two in the UK (and it still sits in the top 50 business podcasts in the US).

Now, with an estimated 150,000 monthly downloads and an ever-growing social media community — their Instagram has 136,000 followers — the South Asian Aucklanders’ brand is earning serious compound interest.

Vogue India profiled Sim and Sonya earlier this year, they’ve just signed a deal with US publishers Wiley to publish a Girls That Invest book, and their TED talk will be filmed in the US later this month. 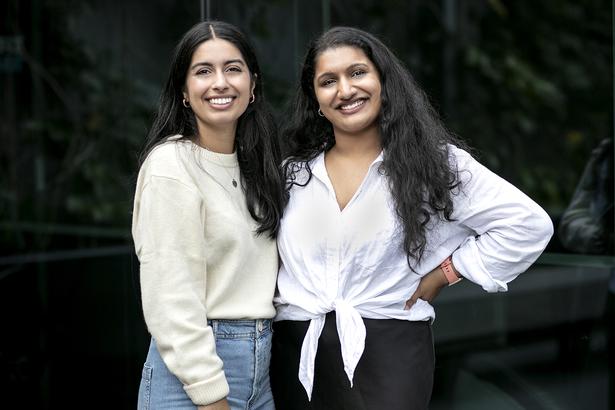 “I feel like it’s been seamless to figure out what we enjoy doing, what we don’t enjoy doing, what our responsibilities are, because we are so open and honest with each other,” says Sim. Photo / Babiche Martens

Sim has given up her day job as an optometrist to focus on the podcast, and Sonya is about to do the same, having just left her full-time role at a health insurance firm. And yes, they have upgraded their recording tech along the way.

“Before we started the podcast, we had only just started talking about money as best friends,” says Sim. “I feel like it’s been seamless to figure out what we enjoy doing, what we don’t enjoy doing, what our responsibilities are, because we are so open and honest with each other.”

Branding themselves as “millennial investors”, they learnt to record and edit the podcast via online resources and decided to road-test the podcast for a year.

Their timing couldn’t have been better, their show coinciding with a tidal wave of enthusiasm for DIY investment platforms such as Sharesies and Hatch, along with a booming share market, and scores of young Kiwis locked out of housing looking elsewhere for investment opportunities.

While the podcast is free, they make money through sponsored episodes and social media content, and by offering a six-week subscription-based “masterclass” for those keen to take their investing to the next level.

READ: Co-Founder Of Sharesies Brooke Roberts On How To Grow Your Wealth

One of the myths Girls That Invest seeks to bust is that investing is only for clever people — yet clearly, these astute financial buddies have worked hard to upskill themselves. Sim got into investing in the first place after taking a certificate in financial markets to better learn to manage and leverage her first proper pay checks — and says she was surprised not only how simple stocks were, but how few of her friends talked about money.

Millennials may get a bad rap when it comes to a perceived love of spending on smashed avo for brunch but Sim and Sonya say getting ahead is more about providing a sense of safety and fairness. Only 16-24 per cent of women invest globally, and the numbers are fewer for women of colour.

“I really do believe that to have an equal world or at least an equitable world, people need to have the ability to be in control of their money,” says Sim, who is also co-founder of The Indian Feminist e-commerce site, selling clothing and accessories with empowering slogans.

“The fact that women and men or minorities don’t have the same amount of money to begin with creates this imbalance. If you’re stuck in a job you hate or a relationship that’s not safe, if you have money, you can leave. You can be more in control of your life.”

They knew the podcast was hitting the right note when fellow podcasters (such as Aussies She’s on the Money and My Millennial Money) started inviting them to speak on their shows.

Likewise, rather than get pushback from financial advisers who’ve spent their careers guiding people through the minefield of investing, Sim says they’ve received a groundswell of support.

“People have been appreciative of the fact we are normalising those conversations, that we’re speaking to a whole population of young women and men who may have not even felt like that space was for them,” says Sim.

READ: Financial Strategist Hannah McQueen On How To Save Money The Smart Way

“So we’re allowing them to then feel confident and go out to an adviser and say, ‘Hey, I want to start my journey, I need help, I know of the terminology. I now feel comfortable to go to you and ask some questions’.”

While steering clear of advising what to invest in (but not shying away from talking about their favoured strategy to invest largely in exchange-traded funds along with popular stocks such as Tesla and Apple), the pair acknowledge the market has shifted markedly since their early broadcasts.

Although Girls That Invest listeners will tell you Sim and Sonya are more interested in “holding the line” for the long-term rather than promoting a reactive strategy that might entail pulling shares out when the market dips, they address these challenges in the recent episode titled *gasp* ‘Is the stock market crashing?’

“If it’s just about investing for a year? Sure, this is probably not the best year to have your money in,” says Sim. “But if you’re investing for 10, 20 years, the bumps smooth out ... we haven’t seen nervousness but we’ve seen a lot of people ask, ‘Is this the dip I should be jumping into?’ We say there’s no point planning to buy in when the market drops completely. No one knows when that’s going to happen. Stick to the fundamentals and just ignore the noise as much as you can.”

Meanwhile Sim and Sonya are a walking testament to the life-altering benefits of investing well. Sim is the first to say she’s a hypocrite — she can’t help but check the markets daily. “She’ll wake up and check stocks, whereas I’m like, ‘Let’s have coffee’,” quips Sonya.

Last year Sim bought her first house at the age of 23 after giving herself a two-year goal to raise a 10 per cent deposit on a $500,000 Hamilton property. Meanwhile Sonya, the “nana” investor of the two, is pursuing a more conservative but no less sensible approach to sit on her gains for now.

The pair say their immediate plans are to keep making great content — and to help remove the social shackles associated with talking about money. Sim got her nails done the other day and her nail technician told her she’d invested in the Korean stock market.

“It was really nice,” she says of their conversation. “I want to get to a point where small talk can be, ‘What do you invest in? What money books do you like?’

“We want to get to the point where women make up 50 per cent of investors in the retail investing market, which I know sounds like a really big goal but I think it’s possible. We get messages every day from women around the world, who say, ‘Just hearing your voices made me feel like if they can do it, I can do it’. And that’s what we want.”

Know your risk profile
The NFTs [non-fungible tokens] and the Meta-verse are going to be a lot riskier than bonds or blue-chip stocks, and broad market funds.

Understand the jargon
The way that the market’s moving, it’s so volatile, you’re going to see investing in the news a lot more frequently, whereas before it was just going upwards, and there are only so many articles you can write about that! It’s important to know what a bull market is versus a bear market and why that’s a big headline.

Ignore the noise, once you know what those articles are about or what those headlines mean
It’s not as scary. It might say the [US stock market index] the S&P 500 plunges, but you look at the “plunge” and it’s 1 per cent.

Understand why you want to start investing
Are you in it for the next five to 10 years? Those ups and downs of the market and those clickbait titles — they’re not going to impact you as much as you might think. Your risk profile is also based on what your goals are. So if you know you want to buy a house and use your funds in the next two years, you’re going to be different from someone who wants to use them when they’re retired.

Listen to Girls That Invest on Apple Podcasts, iHeart Radio or visit Girlsthatinvest.com

Where To Splurge & Where To Save In Your Beauty Routine

Is that nine-pan palette really worth the $90 price tag? Ashleigh Cometti investigates where to cut costs and where to splash o...