Much of the world's plastic ends up in the ocean. Photo / Getty Images Has Tackling The Pandemic Meant Dropping The Ball On Plastic Pollution?

From wet wipes, to sanitiser, masks to single-use serve ware, the pandemic has seen a surge in plastic

Before Covid changed everything, the tide was turning against plastic. Among 18 to 35-year-olds, single-use items like takeaway coffee cups were inching towards social unacceptability, suffering the same fate as smoking.

This perceptible shift represented the growing momentum in New Zealand to lessen our reliance on single-use plastic. We had banned plastic bags, there was an uptake in the use of reusable cups and containers, refillery stores were popping up around the country and hospitality was shifting to paper or compostable packaging products.

But in March, as Covid panic began to spread around New Zealand, plastic waste began to surge too. Reports emerged that Auckland’s waste water system was blocked by an unprecedented deluge of antiseptic wipes.

Watercare staff had to unblock the pump station weekly, as people — scared of the virus — flushed the wipes in a bid to protect themselves against Covid.

These mostly non-degradable synthetic wipes — which pose a threat to marine life — were just the tip of the iceberg. Plastic sanitiser bottles flooded the community, present in every home, office, restaurant and service outlet. Plastic gloves, disposable masks and PPE gear were suddenly being used widely and single-use plastics and serveware returned with a vengeance.

Concerns about climate change and waste reduction were replaced with more immediate concerns for health and safety. With little time to worry about waste, let alone future-proofing a planet under threat from climate change, we stockpiled sanitiser and masks, and service industries moved to become as sanitary as possible.

“Stopping the spread” by adopting a hygienic new normal was encouraged by government officials in the fight against the pandemic. Doing our bit for the team of five million meant single-use everything was preferred and health and sanitation prioritised before waste reduction. But while the virus has a potential cure — a vaccine — plastic pollution is an environmental catastrophe. Are we addressing an immediate crisis at the expense of another? 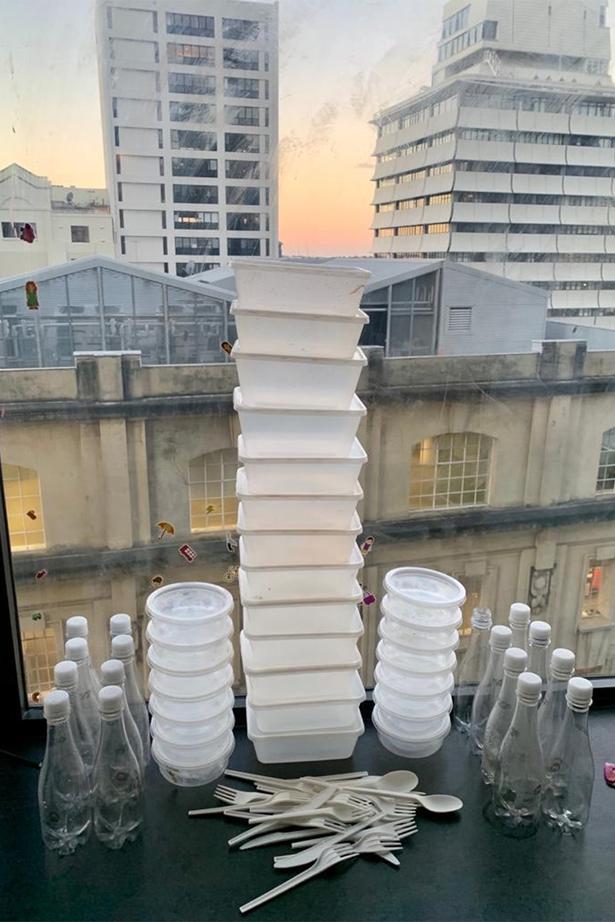 Two days' worth of plastic for a family of three in an Auckland quarantine hotel. Photo / Supplied

During lockdown, kerbside recycling in some regions was put on hold and supermarkets disallowed the use of BYO containers. As lockdown lifted, many coffee outlets, as a safety measure, chose not to accept reusable coffee cups. Big players like Starbucks and McDonald’s banned reusables, and many local chains and retailers followed suit.

These measures and general confusion among the public signalled a green light for some to abandon their waste-reduction efforts. Environmentalists have expressed concern that this permission to use plastic will get people out of the habit of recycling and using reusable products just as progress is being made.

Ocean campaign director at Greenpeace John Hocevar told CNBC in June, “The plastic industry seized on the pandemic as an opportunity to try to convince people that single-use plastic is necessary to keep us safe, and that reusables are dirty and dangerous. The fact that neither of these things is supported by the best available science was irrelevant.”

During level 3, when food businesses were allowed to offer contactless pick-up and delivery, many outlets moved swiftly to translate their food and drink into takeaways. The resulting explosion in single-use packaging was accepted as necessary to keep people safe, as well as a convenient solution for restaurants desperate to keep afloat financially.

Laura Cope manages hospitality support and waste-avoidance strategies for the Takeaway Throwaways campaign, which aims to ban single-use takeaway food waste in New Zealand. She’s also the founder of responsible cafe guide Use Your Own and says the industry has been dealing with the same anxieties as the rest of us. “Plus very real worries about job and income security for themselves and employees.

"I think that more than deliberately prioritising meals in plastic, they prioritised their own mental health and what they perceived to be their own financial survival. The increase in single-use packaging was an unfortunate by-product of that.”

Owner-operators who were committed to reducing single-use waste before the pandemic are continuing to welcome reusable cups and containers, says Laura. Helping matters is that evidence declaring reusables safe is becoming increasingly well publicised.

“On June 22, more than 119 scientists including epidemiologists, virologists, biologists, chemists and doctors from 81 countries published a signed statement to reassure the public that reusable systems can be used safely during the Covid pandemic by employing basic hygiene,” says Laura.

Medical and food safety experts have made it clear that soap and hot water are effective at killing Coronavirus on reusable serviceware. “If accessible, dishwashers are most effective because of their high temperature and prolonged washing, so dining in at level 2 using ceramic crockery and cups is absolutely safe provided food safety risks are managed,” says Laura.

The virus has exposed the lack of large-scale frameworks in place for reusable takeaway and food delivery systems, which would protect the environment from the casualty of convenience. 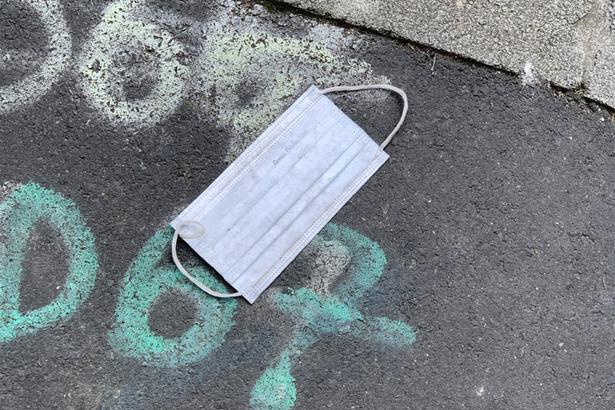 A discarded mask left on an Auckland street. Photo / Supplied

At our quarantine facilities, disposable packaging is used for meal service, following guidance from the Ministry of Health. Images of quarantine food have been doing the rounds on social media, and while some meals are served in paper or bio packaging (each hotel is responsible for its own in-room food service), many have opted for plastic or foil containers, with bottled water and plastic cutlery.

For a family of four receiving three meals a day, roughly 24 containers, 12 water bottles and 24 pieces of plastic cutlery pile up per day, which over 14 days equates to 840 pieces of plastic. Extrapolate that for a portion of the 48,268 people who have been through New Zealand’s managed isolation and quarantine facilities since March 26 (figures as at September 14, 2020) and it’s a staggering amount of waste.

Offsetting the risk to staff managing these facilities is crucial, but the Ministry of Health should be looking at implementing a more sustainable approach to managed isolation, especially if there’s no end in sight to border management.

Around the world, mask wearing is the new normal. New Zealanders have been mandated to wear masks on public transport at alert level 2 and encouraged to wear them in shops and crowded spaces, a phenomenon that’s been mirrored globally.

Though some have adopted reusable masks, many are wearing disposables, which are made of polypropylene (a thermoplastic polymer), that has a lifespan of 450 years. According to Greenpeace NZ, discarded face masks and gloves have been showing up near the coasts of Hong Kong, the US, France, Mainland China and Taiwan.

In Auckland, council contractors have been picking up discarded masks in parks, beaches, reserves and on the street. Given their lasting unwanted effects on the environment, these masks are an ecological hazard. 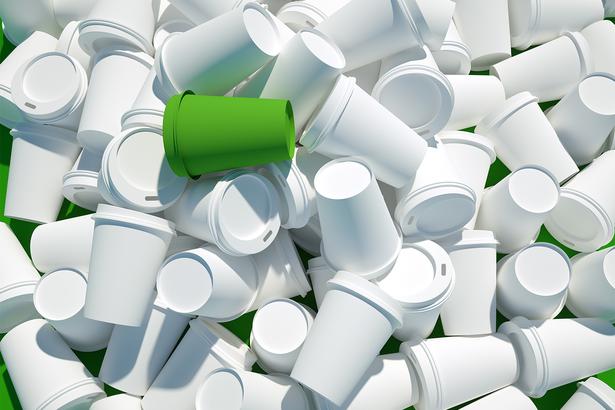 Reusable items have taken a backseat to disposables during the pandemic. Photo / Getty Images

No one is suggesting New Zealand abandons its efforts to contain the virus, but there are things we can do to ensure that waste reduction remains a key consideration. If you’re in a position to do so, refuse plastic and choose products and companies that share the same ethos.

Wear a reusable mask (here are some local examples). There is an election coming up on October 17; it’s imperative to have a say by voting.

On August 12, Conservation Minister Eugenie Sage announced a proposal to address plastic takeaway and serviceware items for phase-outs and bans. Submissions are open until November 4 on the Ministry for the Environment’s online tool.

Keep demanding and asking more of local government, such as the introduction of reuse systems and infrastructure for standardised cup and container lending schemes like Again Again, CupCycling, Wanakup, Good to Go and Reusabowl, which have processes for safe take-back, washing and sterilisation built into the system. Sign the Takeaway Throwaways petition.

And most importantly, as we emerge from this pandemic, keep climate top of mind; the planet needs to be here long after the virus has left us.