Douglas Lloyd Jenkins celebrates the history of Kiwi beach culture in his new book. Here, he reflects on the evolution of the bikini Once swimwear manufacturer Moontide came to terms with the look of the 1980s it was able to export New Zealand swimwear internationally. Picture / Moontide Collection, 1987

In 1976 the swimwear company Expozay was established in Tauranga. It is usually touted as being the first New Zealand swimwear company to export and have an international profile, and it probably was. Yet, as is usual in New Zealand design, there was an earlier period in which Kiwi design talent had been exported.

New Zealander Robyn Garland was one of the country’s first high-profile fashion models in the 1950s. After a career in Britain she relocated to Australia in the 1970s. There she established herself as a leading Australian swimwear designer, producing what came to be referred to as “minimalistic designs for well proportioned bodies”. Vogue Australia described Garland’s bikini as “appealingly brief … fluid and feminine and sexy”.

Despite the occasional raised eyebrow, they sold like hotcakes. Garland is now recognised as an important figure in Australian fashion history and in the development of the swimsuit. She also paved the way for any future New Zealand swimwear companies hoping to get into the Australian market.

READ: You Need These Sunscreens

The essential difference between Robyn Garland’s and Expozay’s earliest swimsuits was class. Garland’s work was minimal but it was sophisticated. Expozay’s earlier work was minimal but somewhat trashy. Expozay at first airbrushed designs on to bikini tops and bottoms by hand. They often used scenes of sunsets, palm trees and, for no apparent reason, tigers. Delivered in the bright acid hues of the late 1970s and 1980s they were about as sophisticated as the bikini-clad Farrah Fawcett-Majors lookalike airbrushed on to the side of a Ford Escort van parked in the sand dunes.

New Zealand manufacturers (Moontide was founded in 1980) were about to learn that internationally, Australia still shaped swimsuit design in a way New Zealand could never expect to challenge. More than that, Australia now had a secret weapon in the form of Elle Macpherson. Through the 1980s Macpherson was the cover model whom Sports Illustrated used most, in a period in which the magazine had considerable impact. The look she subsequently ushered in was broad-shouldered, slim-hipped and leggy. Most of all it was athletic.

READ The Most Flattering Swimsuit of Summer

The shape of swimsuits was once again evolving. In the 1980s not only was the one-piece suit back, but swimwear itself moved back into the limelight with renewed focus. It is no accident that workout leotards and swimsuits now shared the same form. The look was for a hard body that had been worked into shape by relentless exercise. Women, encouraged by Olivia Newton-John to “get physical” and by Jane Fonda to “feel the burn”, were now expected to illustrate a glamorous athleticism and to do so effortlessly.

READ: Why We Love the Beach 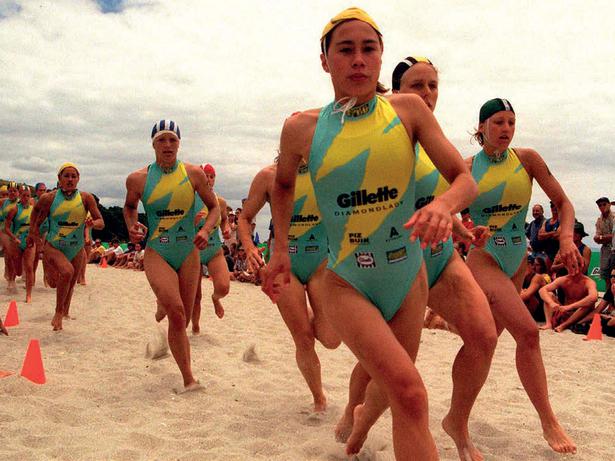 Andrea Hewitt leads the women in the 800-metre beach sprint during the Gillette Diamond Lady Surf. In the 1990s a swarm of Lycra-clad sportspeople invaded the beach and with it reintroduced beachside androgyny, absent from the beach since the 1920s. Picture / Getty Images, Kevin Bride

Whereas the bikini had emphasised the navel and torso, the new swimsuits were all about thighs and buttocks. Swimsuit legs were now cut alarmingly high. A flat stomach was a necessity. The beach, once a public gymnasium, was now primarily for display of the results of private gym membership. Kiwi women started to wear bathing suits under casual daywear to suggest that they were ready for anything athletic that might come their way. Once Expozay and Moontide got on board with this new female athleticism, their brands took off internationally.

Women might hope to emulate Elle Macpherson, Cindy Crawford or Brooke Shields and to emerge from gyms as Glamazons, but men, too, were being driven by a cult of athletic hyper-masculinity. This was personified in the inflated forms of Sylvester Stallone, Arnie Schwarzenegger and Jean-Claude van Damme. At the same time photographers Robert Mapplethorpe, Bruce Weber and Herb Ritts were introducing a new breed of male pin-ups who, though less pneumatic, were still toned, athletic and highly manicured. Across the country the number of gyms exploded.

Gyms dictated exercise regimes that were largely undertaken on the premises. Any man who exercised seriously at the beach would now be called a “poser”. However, the beach did make something of a return as a promenade. A run on the beach (accompanied by the new Sony Walkman) became a popular pastime. But in the later 1980s this sporty look started to seem a little fake, particularly after the glitz rubbed off the decade. The question became, what were all those muscles for?

That question was answered in the 1990s. An entirely new tribe, the triathletes, ironmen and other extreme sporters, all devoted to testing themselves against the environment, flocked to the beach to perform. With them came the return of androgyny as grim-faced athletes of either sex, almost identically clad and certainly identically shaped (the pneumatic ideal had been replaced with an aerobic one) squeezed out the last ounce of beachside energy.

Swimwear and sportswear stayed deeply connected for the rest of the century. At any beach there was now a mixture of surf gear, skate gear, dive gear and branded sports gear. The 1990s probably introduced greater diversity to beach fashion than ever before, but it was the “sporty with purpose” look that had longevity.

Outside fashion, Kiwi beachgoers simply covered up in what was at hand. The hat made a return. So did the beach umbrella. Children were seen in head-to-toe costumes that reflected the tastes of their Edwardian predecessors, the difference being that modern gear had a more fitting form and a greater reliance on quick-dry synthetic materials. No one spent all day at the beach in the sun any longer. Radio stations warned when time in the sun was up.

Who better to look to for summer inspiration than our beach-loving Aussie friends?

Heading away for the weekend? Have brunch at these beachy spots, recommended by Anna King Shahab, author of New Zealand Cafe Co...