Bathrobes have become a powerful marketing tool for hotel chains, particularly when they're shared on social media by people like model Binx Walton. Picture / @chaos

Most hotel rooms are a blur, says Maxwell Young. But there is one part of his stay at the Hotel Palomar in Washington, D.C., that he will always remember: the leopard- and zebra-print robes hanging in his room.

"It was like I opened the closet and rays of sunshine poured out," he said of the bathrobes, which he later raved about on Twitter. ("Snow may have put a crimp in our DC plans, but this zebra robe at @Kimpton Palomar Hotel is really lifting my mood.")

Young, who works in marketing, spent the rest of his business trip working in his animal print robes. By checkout time, he'd made plans to buy a similar robe for a friend.

As hotel chains look for new ways to attract younger travelers, bathrobes have become one more way to add pizazz to an otherwise predictable stay. Gone are the one-size-fits-all robes of earlier decades. In their place: Seersucker, houndstooth and periwinkle blue, all perfectly suited for sharing on social media.

"It's no longer just about putting the hotel logo on a floppy, loosefitting white robe," said Greg Eubanks, vice president of hospitality at Standard Textile, where robe sales to such companies as Marriott International and Hilton Hotels & Resorts have tripled in the past two years. These days, he said, the company's robes have sewn-in belts and pockets deep enough to hold smartphones. They're slimmer, too, and tend to be shorter.

"For years, we sold robes that were about operational efficiency," Eubanks said. "These days, guests want to feel special - sexy, even - in their robes."

To that end, executives at Four Seasons Hotels spent three years fine-tuning the chain's newest offerings, which are more tailored and less bulky than their predecessors. They also have slimmer sleeves to make it easier for women to style their hair in their robes. ("We know customers are pleased because so many of our robes walk away," one executive said.)

Marriott, meanwhile, has replaced many of its white robes with charcoal gray versions that are shorter and have wider sleeves. And at Hilton - where 18 per cent of guests say that "lounging around in hotel robes all day" is their favorite part of being on vacation - lighter-weight resort robes have taken the place of plush terry.

Perhaps the boldest bathrobes can be found in Kimpton Hotels & Restaurants' 65 properties. For 15 years, the San Francisco-based company has stocked its guests' rooms with leopard-, giraffe- and zebra-print robes. Now it is going a step further, introducing a dozen new patterns and designs to its boutique properties, which include the Hotel George and Carlyle Hotel in Washington. 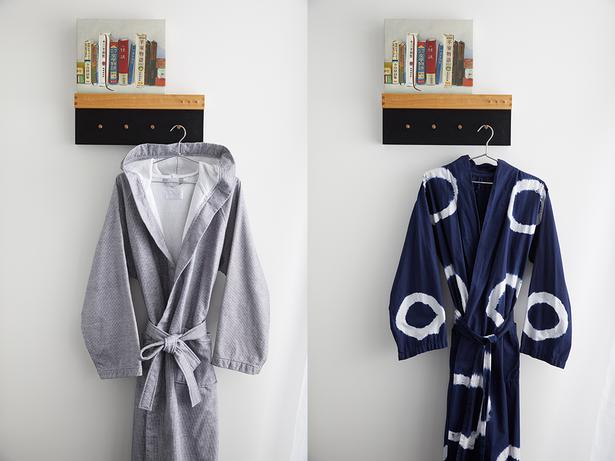 The Hotel Monaco in Philadelphia, for example, now has Rocky Balboa-inspired hooded robes, while rooms at the Buchanan Hotel near San Francisco's Japantown come with kimono-style robes. In New Orleans, guests are greeted with seersucker robes. Other hotels carry herringbone and pinstriped prints as well as robes with hoods and shawl collars.

"As we developed more unique properties, we thought robes should become more interesting as well," said Diana Martinez, Kimpton's design director. "It seems like a small detail, but it makes a big impact for guests."

Finding the right bathrobes can, however, be a years-long challenge for hotels. The pieces must be durable enough to withstand commercial washing and inexpensive enough to replace fairly frequently. That means knitted fabrics like jersey and chenille, which can easily fall apart in the wash or stretch out on a hanger, are out, says Karen Faul, president of Monarch Cypress Hotel Division, which sells 250,000 hotel robes a year.

"Most robes you buy at the store would not withstand commercial washing," Faul said. "We're talking intense pressure, high heat, stressful conditions multiple times a week. Even something like polyester you have to be careful with, because it'll melt if you crank up the dryer."

Guest robes are washed up to 150 times before they are replaced, she said. Hotels typically pay between US$25 (about $35) and US$50 per robe and tend to buy three sets of robes for each room to ensure that they have enough time to launder them between guests.

At Kimpton, a team of six designers oversees the selection and vetting of robes. Once they've come up with a prototype they like, they test it by washing and drying it 30 times in a row. It's a tedious process, executives say, but one that can pay off when customers take notice. Guests often take to Instagram, Twitter and other social-media sites to gush over their robes.

"Aaaannnnd this is why I love @kimpton hotels!," a user posted on Facebook alongside a photo of herself flexing her muscles in the company's Rocky-inspired robe. "I mean!? Cutest thing ever!"

The hotel says it is currently moving away from the leopard, zebra and giraffe print, and a new leopard print design is currently under development.

Courtney Doman, a 29-year-old from Austin who travels frequently for her sales job, says she has become something a hotel robe aficionado.

"It's not, like, the defining factor in whether I stay at a Kimpton, but it's definitely something I think about," she said. Her all-time favorite, she added, is a knit gray robe from the Solamar Hotel in downtown San Diego.

"It was so soft," she said. Honestly, "I did consider taking that one home with me."

Instead, she just tweeted about it: "Thanks for a lovely stay @HotelSolamar! I have a new favorite @Kimpton robe."

Wind Down in Style at Phuket's Sri Panwa Resort, Thailand