Isabella is discovering that all roads lead you home eventually. She talks about the importance of place and family, and her connection with her grandfather, the iconic writer Albert Wendt The marks on Isabella Moore’s wrist are a map. Sharp lines showing her how to get home.

“This sounds a bit harsh,” says the opera singer and model, “but I didn’t like myself as much before I got this. I feel more like me now.”

The taulima (wrist tattoo) is brand new, made with a traditional Samoan ‘au, just the day before this interview. Isabella plays me a recording of the ceremony she shared with her mother, grandmother, cousins and fiance. The tap-tap-bite of wood-on-wood-on-wrist is a kind of songline, connecting Samoa, New Zealand and beyond.

“I do live far from home and I am this traveller. I wanted something tying me back. These waves represent moana, water, the ocean. And we’re all in the ocean. We’re all linked.”

The patterns are newly inked by esteemed tufuga tatatau / master tatau artist Tyla Vaeau, the only Samoan woman learning and practising this traditional art: jellyfish for feminine strength; footsteps for the journeys of Isabella’s ancestors and now her own; diamonds for the family fale and marks that match those on her mother Sina’s traditional malu tatau (customary Samoan leg tatau for women).

Family is everything. “Aiga,” says Albert Tuaopepe Wendt (ONZ, CNZM), gently correcting this reporter. “The word ‘aiga’ is more meaningful to me than family. It’s bigger. Aiga means connections to all your other relatives and relative’s relatives.” 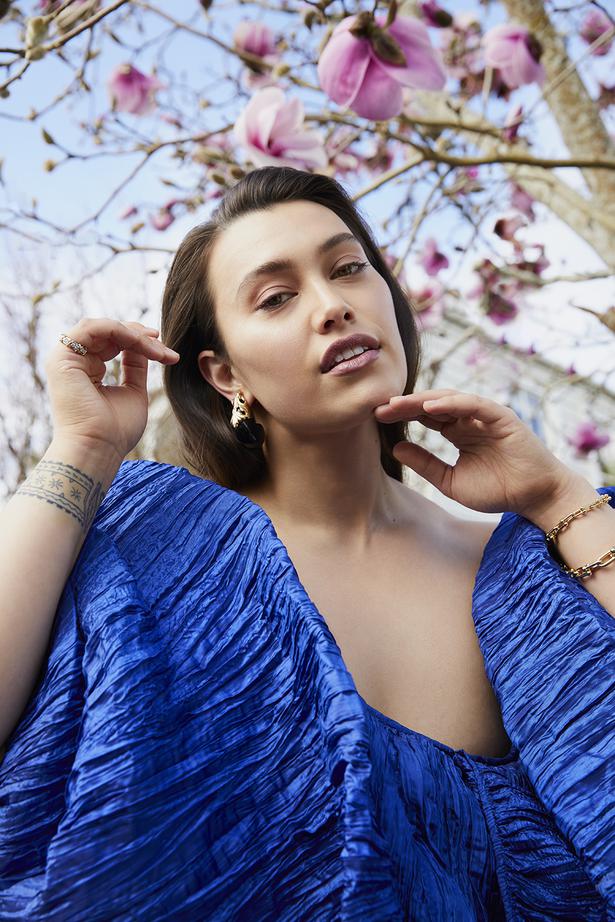 Albert, the renowned Samoan writer and artist, is Isabella’s grandfather. Viva Magazine has descended on his Ponsonby garden. A giant backdrop has been unfurled in front of the parsley bed. When Isabella and Albert face the camera, he loosens up with an unexpectedly wild roar. Isabella leans in. They smile.

When Isabella was a blue-uniformed St Mary’s College student, she cleaned this house for extra pocket money and it inspired the poem Bella Blue. Albert describes his granddaughter’s personality as “uplifting”.

“Doctor, lawyer . . . it’s an easier path I think, if you’re bright like Isabella. But she chose singing and modelling. It’s a very precarious path. It can go up and down. You can become very successful for a while and then new fashions come along and new things come along. But I admire people who do that. People who choose what they really want to do and do it for the rest of their lives.”

The thing about aiga: “We help our relatives take the pain and the suffering. That’s what families are good at.”

A week before that photoshoot in the garden, I met Isabella in a garden centre cafe. She was brunching with her dad John and his mum Frances and had just learned the backstory to her middle name — the blend of Melega’alenu’u and Mary Anne that created Meleane. Born in New Zealand, when she talks about visiting Samoa, she says “going back”.

“I kind of see it as going back to where things began for us and our families.” At primary school, Isabella remembers just three other Pacific Island families. “My friends . . . just came from such a different background. Sometimes they wouldn’t play with me at lunchtime and as a kid you come up with your own reasons why. That I looked different. That, I don’t know, I smelled different?

“I definitely have been someone who was always very self-conscious of how I looked. I was a bigger child and I was tall. Even going in for hugs, or getting in someone’s personal space, I thought people wouldn’t want that. It’s hard to explain . . . I just thought ‘I don’t fit what’s right’.”

In 2014, everything changed. Scouted in a shopping mall, Isabella signed with Ursula Dixon’s Unique Models. Two years later, another epiphany when she saw model and body positivity exponent Ashley Graham walk New York Fashion Week. “Before that, I hadn’t seen legs that I really could relate to mine.”

Isabella says it was her granddad who inspired her to believe she could have a career in the creative arts. She excelled at painting, drawing and photography and thought she would become a visual artist. Therapy sessions have since helped her understand the appeal of that option.

“Nobody can see you and you can be creative and free in your isolation. And we kind of figured out, because of my childhood wounds and never fully body-accepting myself, that was actually stunting who I really am, this opera singer and performer.”

She was the child who loved backyard performances (“Mambo No. 5 was a favourite”). 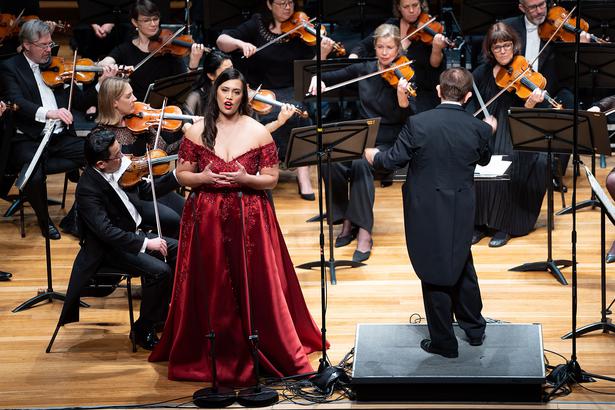 Isabella stars in an opera performance in Australia, 2019. Photo / Supplied

At age eight, she solo’ed Can’t Fight the Moonlight at an uncle’s wedding when a cousin pulled out.

But in public, Isabella struggled to make herself fit, even as her singing successes piled up. She won Lexus Song Quest, the IFAC Australian Singing Competition and various scholarships. Overseas, she made shortlists for young artists programmes in Los Angeles, New York and San Francisco, but she never secured a final spot.

“You kind of just hope for one, but I got none. I had a lot of early success with singing. I just kept winning competitions and riding that wave. But when I went out into the big wide world, I didn’t have as much success. In 2018, I was coming back to New Zealand just a bit broken. I’d never really needed resilience because I’d been built up on this outside validation for so long.”

Back in her comfort zone, Isabella booked corporate gigs and didn’t tell anyone about the rising performance anxiety and lack of self-worth.

“I hated singing. I don’t know if I had an official anxiety or panic attack, but I was in Australia and I had to perform. I was at a restaurant with my parents, and there was a lot of life stuff, and this rejection, rejection . . . they were talking and we were trying to have a nice dinner, and I just remember thinking, ‘I don’t want to. I can’t’. I didn’t cry, but you know when you’re internally screaming?

“The tunnel vision I’d had, driven by anxiety, was not a good way to live. I’d been basing my worth on how successful I was, rather than just being ‘I’m a human, and that’s enough’.”

It was time, she says, to take a break and “get my brain back on track”. When the modelling offers kept coming in, she said yes.

“Modelling just gave me some good vibes back. I enjoyed it, it felt quite natural and I got to have my spotlight again. I guess I treat it as a performance and that, to me, proves that I love performing. I’ve learned that I never lost anything.

In the three years since that restaurant dinner, Isabella has returned to London, become engaged to longtime friend and baritone Benson Wilson and says even England’s prolonged lockdown had a silver lining — more time for singing training, practice and “working on myself”. Home for a friend’s wedding, she will once again grace the New Zealand Fashion Week runway. This is Isabella in her happiest place.

“When I got this,” she says, rubbing her new tatau, “it felt just as good as when I’m singing. You know when you’re at a family event and everything is just happiness and joy? And you’re happy to be surrounded by all this love and energy and positive vibes? When I’m singing and relaxed about it, it feels like that to me. Just joy. Like, ‘this is right’.”

A year after having her first baby, supermodel Ashley Graham tells Caroline Leaper about motherhood, walking in heels again and...