Back during the first strict and strange lockdown in the autumn of 2020, when the days were still and bathed in fading sunlight and no one had any idea of what was to come, everyone coped differently. Karin Montgomery found herself obsessively collecting plant specimens from her Freeman’s Bay neighbourhood.

Karin might have leapt the odd fence in neighbouring Herne Bay to snaffle a plump magnolia flower or snatched a piece of ivy from a ramshackle brick wall on a lonely street corner, or fossicked through the buckets at her local dairy for a bunch of wilting asters. None of which would seem particularly out of the ordinary if she had just plonked them in a vase and watched them slowly wilt with the days.

But what she did next became the beginning of an artistic exploration that has led to three successful exhibitions — and admittedly a set of weary hands and eyes.

The artist, who has a background in textiles and runs her own interior design business, found herself, like most of us at the time, unable to work, so she went about recreating stems and branches with dizzying accuracy from her existing collection of crepe paper. She used wire as the supporting frame for her paper structures, as well as powder paints, chalks and water to layer colours into the paper over many sessions to create depth and realistic rendition of naturally faded hues, and employed minuscule scissors to create the delicate seeds and buds or the nibbled edges of leaves.

“I’m not that keen on perfect specimens. I like to study the life cycle of each plant — the bug-eaten parts, the slightly wilted, the gnarled ivy or the mandevilla on the wane — there’s a beauty in it all,” she says from the Anna Miles Gallery veranda, which has verdant, slightly spooky views across the Symonds St Cemetery.

The idea to build her own form of florigium (a collection of floral illustrations — a practice popular in 16th-century Europe when wealthy patrons commissioned artists to catalogue new plant species) was inspired by her interest in the floral paper mosaics of English artist Mary Delany (1700-1788) and New Zealander Fanny Osbourne’s (1852-1934) watercolours of the flora surrounding her home on Great Barrier Island.

“What struck me during the first lockdown was that we don’t really look at flowers, they’re all around us, but one needs to look at them carefully. In the past, I’d never liked rhododendrons — I thought they were a big, brash, nasty tree. But when I actually studied one, I realised each head actually consisted of 12 individual flowers. I overcame my dislike and was in awe,” she says. The resulting lilac-coloured rhododendron catawbiense displayed on an aged plaster plinth — part of Anna Miles’ antique collection — looks resplendent and triumphant in the exhibition and points to the artist’s new appreciation of its form. Some of the flowers are near opening, partially encased in their mustard-tinged cases, and others halfway bursting with pinkish petals.

However, Karin’s favourite work is the humble ivy branch lying in an antique glass display case. “I don’t discriminate. I tend to like plants that are ignored or disliked by people — hence the title of the show, Minores — Latin for minor. I’m very keen on making common branches and leaves.”

Her rendition of fagus sylvatica — commonly known as copper beech — is testament to the artist’s observational skills, with the subtle fading colours of bronze to green, the ridged and slightly brittle leaves.

She treats each branch or flower with a sealer that not only protects its colour but also helps to achieve the gesture of each specimen. Some of the works in the show are intentionally partially waning and need a treatment that gives them less rigidity.

When Karin collects plants, she requires two, one for dissecting and another for an overall three-dimensional view. “For a certain part of the process, I have to work really quickly before the plant fades.”

Not every specimen Karin finds or is given translates as well as others and she says each has its own set of challenges. “Flowers can be made more easily than leaves and branches — I’m a perfectionist so there have been times when I’ve had to rip it up and start again.

“The part I love the most is the colouring process, the layering, and it also means I’m coming to the end of the work,” she smiles.
On that note, each stem takes her weeks and she can only work in three-hour sessions due to the intensity of focus they require. Just the cutting of the seeds in the centre of the sunflower is a pure feat of patience.

Karin works from her kitchen table with classical music playing to assist her attention and flow. Not surprisingly, she also has a thing for gardening and for sewing. “I’m a maker at heart,” she says.

An astonishingly accurate one at that. Her joyous show features 25 specimens ranging in price from $900 to $2800, each labelled with hand-inked cards stating their Latin names. 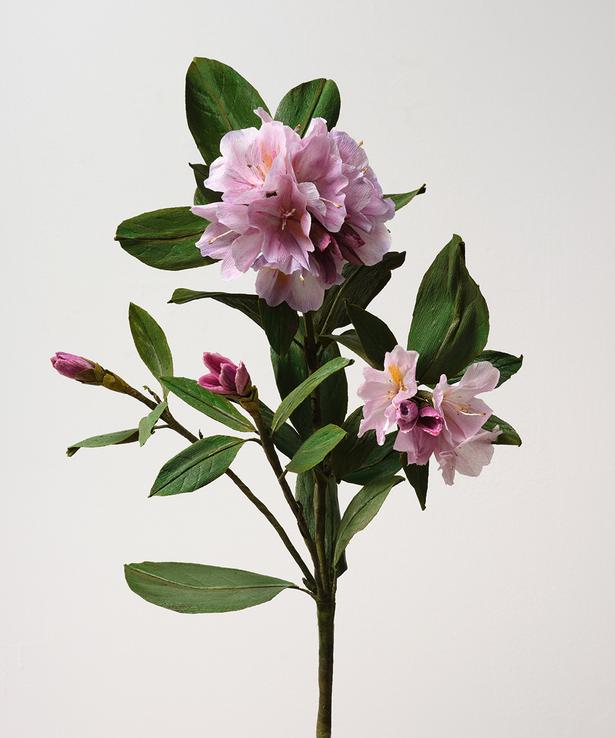 Some are displayed in large glass antique cabinets resting in old-fashioned bottles, others on plinths or antique capped chimney pots.

Each specimen has its own personality — a “look at me” quality — some, like the overlooked red geranium in an old terracotta pot, find new status in paper, while the happy blush and black dahlias live on through winter.

“There is something about her appreciation and attentiveness for the plants that makes these works so wonderful,” says Anna Miles, her gallerist.

“During these uncertain times, somehow we all feel more connected to the seasons and to plants. Nature is truly a consolation.”

On Waiheke Island, the eco-passionate designer's piece mirrors the push and pull of the ocean