Digital Artist Lisa Reihana: Our Venus at the Venice Biennale When artist Lisa Reihana’s work travels to Venice to represent New Zealand at the world’s most prestigious art fair, it will be the latest step in a journey which began centuries ago.

in Pursuit of Venus [infected], Reihana’s vast video panorama interrogates the fanciful vision - a mythology, if you like - of the Pacific and its peoples popularised by early European explorers and perpetuated through literature and art.

She went on to spend nearly seven years animating the wallpaper by adding images and sounds of dance and cultural ceremonies and showing myriad people from New Zealand and the Pacific.

Now, as a challenge to those enduring Eurocentric views, Reihana returns it to Europe for the 57th International Art Exhibition - La Biennale di Venezia - with a distinctly Pacific and new world sensibility.

At the Venice Biennale Arte 2017, which opens next month, it will be aptly titled Lisa Reihana: Emissaries. This includes iPOVi, the filmic re-imagining of Les Sauvages De La Mer Pacifique, and new photographic work and video.

Emissaries questions culture and representation in a way far more intriguing than a written text and it is striking, elegant and diplomatic in making its point. Some 49,000 people saw iPOVi when it showed at Auckland Art Gallery in 2015; about 500,000 are expected to see Emissaries in Venice.

It is both a window and mirror that allows us to look at and reflect on the journeys we’ve been on through our histories, at times talking past one another and losing in translation nuances and subtleties and, ultimately, understanding.

WATCH: An extract from Lisa Reihana's in Pursuit of Venus [infected]

Is Reihana nervous? Naturally, she says there’s a nervousness as well as excitement about how it will be received. There’ll also be an element of relief.

“For so many months, Venus lived inside a computer and then when I saw it, there were things I wanted to shift and polish so I’ve had the chance to finesse the work and add to it,” she says “When it goes to Venice, it has to be the absolute best it can be, which means there’s been many more hours put into it.

“That fine-tuning has been a lovely opportunity for me and I can’t wait to see it on a 23m wall in Venice. There’s nothing worse than thinking something is not quite finished because it lurks there in the background, so there’s part of me that can’t wait to put it to bed so I can breathe again.

“I really want it to work for everyone who has given their time and effort. I want them to feel proud of how we are presenting it. It’s been so long in the planning and making that we’ve created a community around it and that’s important to me because I want people to feel they own it as much as I do.”

Although Reihana conceived and drove the project, thus getting naming rights, about 150 crew, cast, gallery professionals and administration staff have helped make and get Emissaries ready to travel. More latterly, those assisting have included staff from the world’s oldest scientific research institutions. In a rare move, Reihana was invited to the Royal Society to delve into its archives.

Reihana gained access to some of the society’s most precious artefacts, including observational instruments Cook used during his Pacific expeditions. She describes it as one of the most incredible opportunities of her career, and the society’s executive director Dr Julie Maxton says it was “delighted” to support the project.

“Science and the arts represent some of the greatest triumphs of human achievement and it is a wonderful first for the society to have some of its precious artefacts used by an artist to create work for one of the world’s most important international exhibitions.

“This project provides a fascinating insight into what happens when historic objects are taken out of their usual context and reinterpreted in fresh and exciting ways for new audiences.”

Reihana was entranced by the image, winding and ticking of Cook’s much-travelled John Shelton clock used on his second and third voyages. Its sounds have been subtly integrated into the Emissaries soundtrack because the idea of using an analogue clock in a digital artwork 200 years after the clock was last used appealed to her.

“It’s another way for the old and new to come together.”

She also read correspondence that revealed the complex relationship between Cook and naturalist Joseph Banks, who later presided over the Royal Society for 42 years.

“Seeing something written in script is quite different to seeing it typed up or read from a page in a book. Banks was a linguist so I suspect he was very good at picking up other languages quite quickly and could probably extract information from Tupaia [the Tahitian navigator who accompanied Cook] quite effectively. I think those two would have got on well.”

In Emissaries, Banks is portrayed as something of a Bohemian dandy, who wears oriental-style dress and looks resolutely out at a world he seems determined to embrace and be part of rather than simply mapping and cataloguing it.

When the wallpaper Les Sauvages De La Mer Pacifique, painted in a Neo-Classical style, was shown in Paris at the Exposition des Produits de L’Industrie Francaise in 1806, the apparently exotic of life in the Pacific captivated many.

When Reihana saw it more than 200 years later, she, too, was equally fascinated but more by the idealism of it and what it didn’t show. Noting Charvet worked during the so-called Age of Discovery, she immediately thought of the discoveries that could be made by casting a critical eye over it and reflecting contemporary concerns.

It means her reading of the past is darker and more nuanced. She agrees, saying it was important to encapsulate the complexities of cultural identity, colonisation and even gender roles in a modern re-imagining. “It made me think a lot about how we remember people, who gets to tell the stories and therefore determine what becomes our history.” 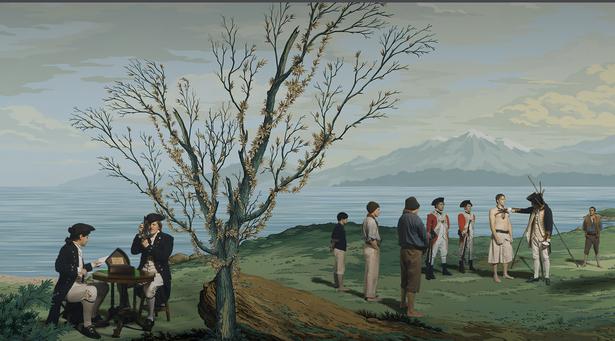 She offers insights about life in the Pacific that were missing from the original wallpaper: a brisk trade of iron and desirable goods for sexual favours, differing ideas of ownership and reciprocity leading to misunderstandings, violence and, ultimately, Cook’s death.

“When you are researching, you find yourself questioning assumptions that have been made. Cook’s death is often seen as an act of barbarism; after all, his body was dismembered and his thigh bone and hat returned to the Resolution. In our storyline, one of the crew says, ‘where’s the rest of him?’

“Much of his body was distributed among Hawaiian villages to be kept as an act of remembrance - similar to keeping bones in a church reliquary - so everyone could share in this significant moment and his remains could be looked after.

“In some Pacific feasting practices, the thigh is the most highly prized part of the offering. Cook’s thigh bone was returned to the crew, so what may have seemed like an act of barbarism is actually an act of reverence.”

One of the things that delighted Reihana most about the various incarnations of iPOVi has been hearing people, especially teenagers; begin to think more deeply about history. “I didn’t get inspired by history when I was at school but I love the way art can end up involving skills and knowledge that take you into different places, different times,” she says. “It can become, ‘who am I and where do I sit?’

READ: Inside The Body Laid Bare: Masterpieces from Tate

“Making this has helped me understand better, to see things in a wider context and to reflect on how things translate and shift through time. That journey of learning, I love it.”

Although being named as our representative to the Venice Biennale has meant growing iPOVi into Emissaries, Reihana also has a multitude of other projects on the go.

For the 2016 Walters Prize, she created Tai Whetuki - House of Death Redux, which grew out of iPOVi but focuses on Polynesian traditions associated with death and mourning. Last month, Reihana travelled to Hawaii for the first Honolulu Biennial contemporary visual arts festival where Tai Whetuki is displayed at the Bishop Museum.

More intriguingly, she’s joined landscape architect Megan Wraight to work on the design of a new road in Wynyard Quarter.

ABOUT THE VENICE BIENNALE
Lisa Reihana: Emissaries is New Zealand’s representative at the 57th International Art Exhibition - La Biennale di Venezia, which started in 1895 and is now regarded as the largest and most prestigious international contemporary art exhibition.

Held every two years in late May or June and running for nearly seven months, it involves more than 80 countries and attracts more than 30,000 key international curators, critics, collectors and artists to the three-day Vernissage (preview) period alone.

Creative New Zealand funds and manages our presence in Venice; Emissaries was one of 11 proposals received and these were assessed by a selection advisory panel chaired by Arts Council chairman Dr Dick Grant.

Auckland Art Gallery director Rhana Devenport is the curator for New Zealand’s presentation and Auckland Art Gallery Toi o Tamaki a significant contributor to the project. The New Zealand pavilion will be in the Tese dell’Isolotto, one of the oldest buildings in the Arsenale, among many permanent national pavilions.