For architect Angus Earl, who’s always been a little Eurocentric, Berlin offers a tangible proximity to the history and narratives that he’s long identified with. “Europe as an idea and as a place is something I’m deeply drawn to,” he says. “In architecture alone, the depth of history provides a never-ending context for research — I’m constantly photographing, sketching and annotating my travels.”

Angus relocated from Wellington five years ago after completing a master’s degree in architecture, where he combined teaching at the Victoria University School of Architecture and Design with an architectural apprenticeship under the inimitable Roger Walker. At boutique Berlin-based architecture firm Bfs he’s busy working on a range of projects, from a penthouse addition to a historically protected building in west-Berlin; a new-build home; a contemporary extension to a pre-war building, and a collection of hospitality spaces. “We see ourselves in a lineage from Karl F Schinkel to Max and Bruno Taut, through to Adolf Loos and Mies van der Rohe,” says Angus of Bfs’s architectural range, which includes large-scale commercial, interior and heritage work. “Similar work can be seen in contemporary architects like David Chipperfield and Max Dudler.”

His own home is a classic ‘altbau Wohnung’ in Neukölln, a pre-war apartment built in 1918 where he lives with his partner. “It’s a little rough around the edges, but we’re working on it slowly. As with most apartments, the greatest luxury is space — it’s a family-sized apartment with high 3.9m ceilings, which was a typical format before the war.”

The thing I love most about my city is… the freedom. It’s a cultural cliche, but Berlin is a place of extreme personal, physical and financial freedom. That, and the rent control.

Much of my spare time is spent… visiting museums, hunting for unloved objects or reading at home. In the evening you will typically find my partner and I at one of our local haunts — probably our friend’s bar Lager Lager — sharing a bottle of wine with our close group of friends.

One of my favourite pastimes is… finding furniture and objects. I’m slowly starting to fill my apartment with design items I’ve sought after for a long time. 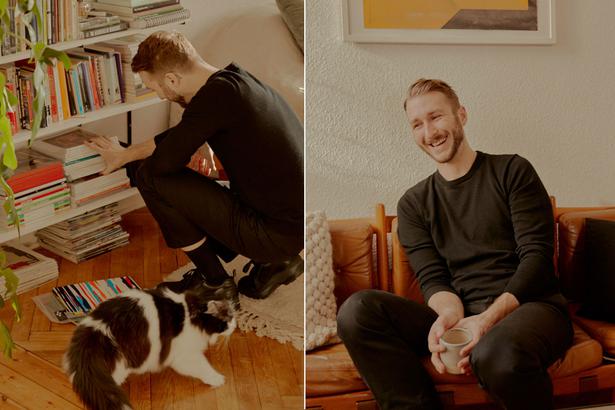 “Europe as an idea and as a place is something I’m deeply drawn to,” says Angus. Photos / Ben Clement

In terms of emerging creative scenes in Berlin… our close friends run a creative agency called Gruppe, it’s a fascinating example of interdisciplinarity between creative groups. In addition to regular collaborations with the fashion and art communities, they work with the guys running Herrensauna — a club night that’s brought a hard 90s edge back to the techno scene in Berlin.

My favourite area of the city is… the western edge of Potsdamer Platz. It’s a useful cliche to say that Berlin is a city of contrasts. The most obvious contrasts, and the ones that I find most fascinating, are historical. Nowhere better signifies this, architecturally, than the western edge of Potsdamer Platz. You can walk from Mies van der Rohe’s Neue Nationalgalerie (a personal favourite), past Hans Scharoun’s bizarre Philharmonie and State Library buildings, through Richard Serra’s ‘Berlin Junction’ public sculpture, and finish at Peter Eisenman’s memorial to the Murdered Jews of Europe. If you keep going you’ll find yourself in the middle of Tiergarten, a beautiful public park.

Something quintessentially Berlin that visitors should try is… a drink, preferably a späti beer, at the Tempelhofer Feld during sunset — it’s Berlin’s version of wine and a baguette at Montmartre.

Get to know our Berlin issue cover stars