As he prepares for his first live show in New Zealand this week, award-winning filmmaker Louis Theroux reveals to Dan Ahwa why it's time for people to get to know him better For most people, living outside your everyday milieu and into new experiences can riddle you with anxiety.

For those familiar with Louis Theroux's deadpan delivery on camera as an award-winning documentary filmmaker, journalist and broadcaster, in situations that might cause most of us to breakdown, Louis doesn't so much as bat an eyelid.

Halston: The Rise And Fall Of Americas Greatest Fashion Designers

It's an emotional blankness that has served him well on TV (although he is still an anxious flyer), but in his new memoir Gotta Get Theroux This: My Life and Strange Times in Television, the 49-year-old is candid about his personal life. Speaking on the phone from London, he reveals there's more to Louis than what’s on camera. He's also awfully polite.

"TV shows are kind of a device. It's a curated version of me for TV which exists to be sort of a straight man in a strange world. For the book to work, I needed to dig deeper."

"I found myself up against the fact that half the time I don't know what I'm feeling, whether I'm in love or whether I'm happy or when I'm deeply distressed. I'm not an emotional blank, but these things are much less clear to me than you might think they should be."

"I became aware that I spend a lot of time hiding from myself and the most effective way I’ve found to deal with this is to go into worlds where I felt invisible, amongst people who were grappling with far more serious problems than the ones I was facing."

He's married to TV director Nancy Strang, and the private couple resides between L.A and London with their three boys Frederick, Walter and Albert. Born in Singapore to progressive parents, Anne, a British relationship counselor and Paul, an American travel writer who wrote the classic 1975 travel book The Great Railway Bazaar, Louis' upbringing makes for fascinating reading in his new book. His brother Marcel is also an accomplished novelist and broadcaster.

"My dad brought my brother and me up to believe that the highest calling was the literary life" says Louis.

"Actually my dad was really helpful with my book. I resisted getting his input the first time I wrote a book — I was feeling too sensitive about it. I wanted to do it myself and didn't want him breathing over my shoulder, but this time I thought 'I think I can write a better book if he helps'. It's actually quite hard to get someone to read a draft of your book because it's a commitment. It can take hours."

His mother, a feminist, also had some bearing on Louis' upbringing — especially his relationship with women. "When I started going out with girls and women, I supposed I always look to someone who had that self-possession, of wanting to make the world a better place and to challenge stereotypes." 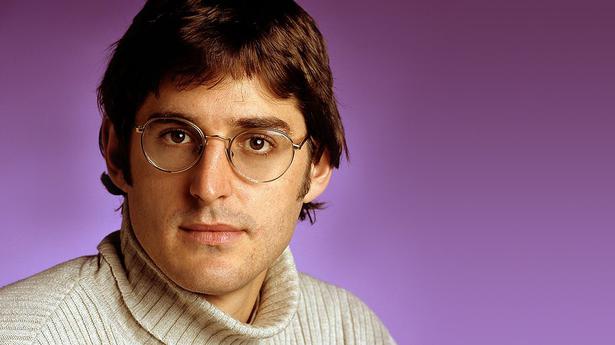 One of Louis' earlier promo photos has also made it's way onto fan memorabilia and merchandise. Photo / Supplied.

Unlike most autobiographical books which can often be a reductive collection of anecdotes or a small nod to aspects of a professional life, Gotta Get Theroux This is indeed a deeply revealing perspective from someone who has for long time lived vicariously through other people's lives.

When I ask him about whether or not he's become less or more empathetic over the years he pauses. "That's a great question. I'm tempted to say that instead of growing its decreased, although I don't think that's true. I would say I'm fairly empathetic, but only in the sense that I've always been — and I don't say this proudly because I'm slightly embarrassed — but I've always been thin-skinned and quite sensitive. I've always wanted people to like me, even when I disapproved of them."

"Even if you represented some of the worst aspects of ideology or poisonous toxic religious commitment, some part of you wanted their approval. I think I always felt like I didn't want them to be disappointed in what I had to say about them. I didn’t feel sufficiently certain about my own beliefs, about my own current take on the world to want to discount everything that they had to say."

That understanding has also helped Louis stay in touch with Megan Phelps-Roper, a former member of the infamous Westboro Baptist Church from Kansas who Louis first encountered in 2007. Known for picketing funerals of U.S service members and its anti-Semitic, homophobic views, Megan, who left the church in 2012, is joining Louis for his Australian and New Zealand tour next month, Louis Theroux Without Limits.

"It's easy to look at other people who think differently and think, 'well I would never do that. What could possibly be wrong with them, they're evil.' Most of the people from Westboro never had a chance. What you see when you're at Westboro is this crazy cocktail, of positive and negative ousts. When abuse is mixed with love, it becomes so muddied and adulterated and ultimately almost impossible to break from."

"I'm looking forward to visiting New Zealand. I've never been before" he says, noting Lorde follows him on Twitter. "So maybe I'll see if she wants to come to the show. I also hear nothing but good things about Jacinda Ardern, it would be a thrill to meet her as well."

• Gotta Get Theroux This: My Life and Strange Times in Television, published by Macmillan, $35, is available in all good bookstores. Louis Theroux Without Limits is on at The Civic December 10. Tickets available from Ticketmaster.