The lodge is warm and intimate, designed to reflect and maximise the ever-changing views. Photo / Supplied It was once Shania Twain's home. Now the piece of paradise is a stylish escape where you can connect to the land

You can arrive like a rock star at Mahu Whenua. Skimming in a helicopter across Lake Wanaka and cutting through the shadows of the soaring dramatic mountain peaks that punctuate the blue skies, before landing on the manicured garden lawn. Or, you can opt for the picturesque 30-minute drive from Wanaka township around the lake and through rolling green farm land.

Whichever mode of transport you choose, you can guarantee your breath will be taken away by the expansive beauty, along with the warmth of the welcome from the passionate team that run this exclusive eco-lodge at the heart of the vast and mighty 55,000-hectare station.

It was a rock star, of course, that put Mahu Whenua on the map. Shania Twain, in 2003, with her then-partner, record producer Robert ‘Mutt’ Lange, purchased the high-country sheep stations Motatapu and Mt Soho. (When they split and she returned to the States, he went on to add Glencoe and Coronet stations to his impressive landbank.)

The lodge was their home and, unlike other purpose-built resorts, it really does feel like you’ve walked into someone’s house. Albeit one with his and hers kitchens. 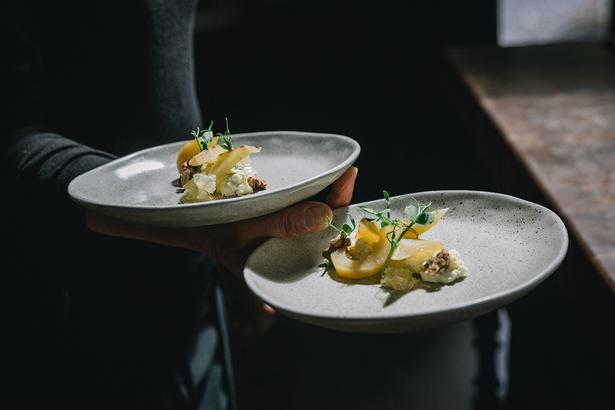 The food is as fresh and spectacular as the surroundings. Photo / Supplied

Before arriving, a fellow journalist told me, ‘Whatever you do, don’t mention S.T.’ But it’s impossible not to. I was staying in her bedroom for goodness’ sake. Sleeping under the silver chandelier, that surely she chose (when you see it you’ll know what I mean), and soaking in the indulgent deep copper bath that sits by the bedroom’s floor-to-ceiling windows that frame the most extensive view ever.

A bath designed to soak aching bones after a day skiing or horse-riding. Or there’s the glass shower that protrudes from the side of the house, and blasts you with jets while you spin to take in the near 180-degree views of the property. You get the picture. The extra touches add a little Hollywood glamour to the rustic decor of exposed rocks and recycled beams.

The team at the lodge ensure a refreshing sense of relaxed informality. The meals are impressive and designed for hearty active appetites. (This is the perfect place to base yourself to explore the region’s skifields, or hike and bike the mountain trails.)

The ever-changing menu is based around local seasonal produce and matched with a tempting wine list. 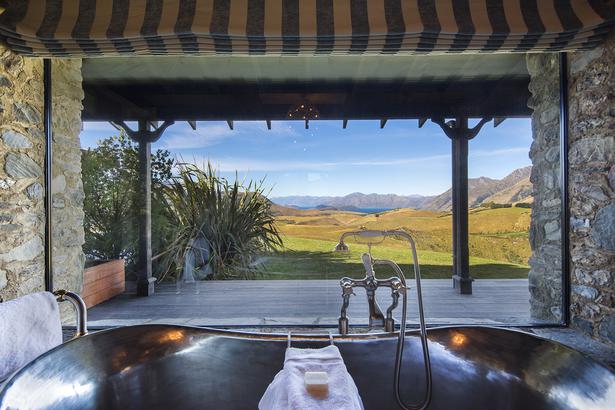 The view from the copper bath in the master bedroom, the perfect place to soak a tired body after a day of horse-riding or skiing. Photo / Supplied

A stay here is all about connecting with nature. Snow falls overnight and cuts a line across the landscape, bringing with it a new perspective and a reminder of the size of the mountains that surround us. You can’t help but feel humbled.

To connect with the land and get a deeper understanding of its history, and future, a tour by ute with station manager Russell is the best option. Russell used to run his own station so knows his stuff.

A Southern man through and through, even he is amazed at the scale of what is happening at Mahu Whenua.

The majority of the land, he explains, had for decades been run by farmers for large-scale grazing and resulted in the slow degradation of the land. This came on the back of earlier deforestation and the loss of native fauna with the introduction of exotic predators. 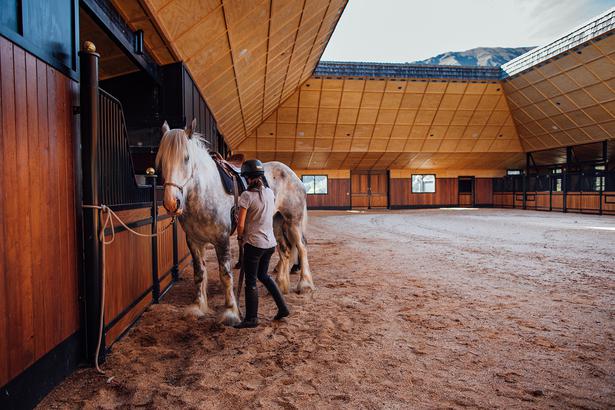 Saddling up at the farm’s impressive stable block. Photo / Supplied

Today, Lange has placed 90 per cent of the total holding under a conservation covenant that is protected in perpetuity, making it the largest conservation undertaking on private land in New Zealand. Along with a rigorous pest control programme, his long-term goal is to return the valley to its natural vegetation.

For the remainder of the working farm, the key is to be as sustainable as possible and, to protect the land, all stock is removed during the winter months. As the ute crunches along the metal of the farm road, Russell points out a series of paddocks being used for research and development as a seed reforestation project in conjunction with the QE11 National Trust and Otago University.

We roll past one of the property’s shearing sheds and push up the valley to a shepherds’ hut where we stop for tea and fresh baking. The ultimate challenge is the restoration of the biodiversity throughout the property, Russell explains, and millions of trees, flaxes, shrubs and grasses have been planted. It’s such a huge property and there are many challenges.

But they are fortunate to have an owner who has a big vision. No wonder he named his station Mahu Whenua, which in Maori means ‘healing the land’. 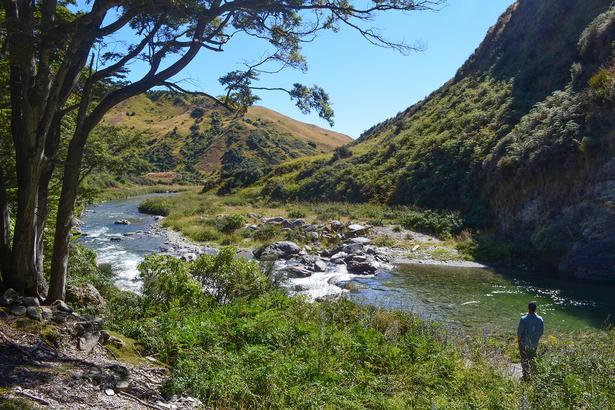 As I bask in the afternoon sun, the only sound the occasional bleat of a sheep, I feel deliciously content. Far from the hustle of city life, I acknowledge what a privilege it is to even be here and although it is owned by just one person, to give thanks that Lange and the team who work for him see how important it is that we protect this unique corner of the world.

Another afternoon, we saddle up to go horse-riding. (The stable block and arena built by S.T. are incredible.) The air is fresh and crisp, and as we follow the trails, wade through crystal clear rivers and weave quietly among grazing stock, surrounded by the song of native birds, there is a true sense of awe. Not just at the majesty of the landscape but a respect of who and what came before. Moa; Maori hunting for birds and eels; Chinese gold miners; sheep farmers.

This land attracts hardy adventurers. The tough terrain and extreme weather is not for the faint-hearted.

On a glorious sunny day, it feels like paradise. And today, of course, we have the luxury of the lodge to return to. With a roaring fire, a glass of red wine, a cosy armchair in which to snuggle into and watch as dusk creeps across the spectacular landscape, throwing shades of soft mauve, purple, blue and eventually an endless sky of pitch-black twinkling with a million stars — it is a dream world.

Disconnect with a hammock, vinyl records and an outdoor bath at The Green Rabbit

Hikers and mountain bikers, Garston’s Slate Hut is for you