The chic interiors of The Surfrider have the laidback vibe of a Californian beach house. Photo / Supplied As is the way with most Malibu locals, Stanley is trim, taut and tawny. But unlike the billionaires, beach babes and pro surfers who call one of the world’s most iconic beaches home, he’s a giraffe.

Stanley resides at the Saddlerock Ranch, set on more than 400ha in the sprawling hills and canyons of the Santa Monica mountains just 30 minutes from central Malibu, where he lives with a cast of zebras, camels, bison and alpacas that have retired to greener pastures after starring in Hollywood blockbusters including The Hangover 3, which was Stanley’s main calling card.

READ: The Most Elegant Stay In Flashy Miami

Befitting California, my tour guide is suitably peppy as she briefs me on the Malibu Wine Safari I am about to experience with Stanley and his brethren.

“We’re gonna see some zebras and llamas, we’re gonna taste some zinfandel and sauvignon blanc, eat some cheese and crackers and we’re gonna find some long-horn cattle, donkeys and goats and get a selfie with Stanley,” she says. And we do. We traverse the picturesque valleys in an open safari truck equipped with wine glasses, plonk and food to feed both ourselves and the animals. Although the experience is indeed exotic and eclectic, the wildlife of Malibu Wine Safaris, founded by local and CEO Dakota Semler after a light-bulb moment during a Kenyan safari (“bring it to the ‘Bu’, as residents refer to their hood), pales in comparison to the star wattage of celebs from Lady Gaga to Ellen DeGeneres with homes on the 48km stretch of beach.

Many were forced to flee after the Woolsey bushfires ravaged Malibu in November 2018, but the area has regenerated and is tonier than ever when I checked into boutique bolthole The Surfrider, founded by hotelier couple Emma Crowther Goodwin and Matthew Goodwin last year.

Originally from the surfing hamlet of Byron Bay, Australia, Emma has made chasing an endless summer her vocation with the property that was formerly a 1950s motel and now encapsulates the nostalgia of that decade with a decidedly chic and contemporary twist. 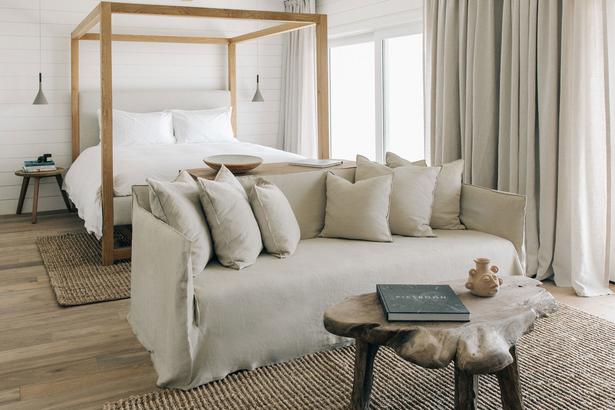 Situated on the near-mythic Pacific Coast Highway opposite Malibu Pier and the fabled Surfrider Beach (chronicled in Bruce Brown’s cult classic Endless Summer) the hotel lives up to its rock-star location with interiors that embody the Californian dream. Rooms have private terraces with ocean views, the upstairs ones with hammocks, and are kitted out with Bellino linens, Bose speakers, Parachute robes and Grown Alchemist toiletries. The minibars are stocked with Californian snacks, drinks and goodies and there’s a quiver of surfboards, complimentary for guest use, that are created by local shapers for Malibu’s waves in a colour palette taken from vintage surf magazines.

A rooftop open-air restaurant is filled with comfy lounge chairs and has a fire pit for crisp Californian nights and there’s a 1968 Land Rover for surf trips or beach bonfires up the coast. If it all sounds a bit too earnest and cool for school, it really isn’t. The staff are so welcoming that it’s like being over at a friend’s house — that is, if your friend has an immaculate record collection — the sound system plays an endless ode to California in the 60s and 70s from The Mamas & The Papas to The Doors — custom-built furniture, and a rooftop bartender mixing beachy cocktails.

“Our vision was to create quintessential beach house in California, complete with your own staff, a private roof deck and the most iconic surf break in the world on your doorstep,” Emma says. “If the California Dream was a hotel, we wanted that hotel to be The Surfrider.” To make that dream a reality I take the Land Rover to explore the ‘hood where Hollywood stars and professional athletes live in oceanfront homes enjoying front-row seats for surfing and spectacular sunsets. My first stop is Malibu Country Mart, an upmarket shopping complex with a gourmet delicatessen and a range of boutiques running from cult Los Angeles favourite Fred Segal to the aptly named Sun Lounge Room where I pick up a bikini by Californian designer Heidi Merrick, an avid local surfer.

“I surf Third Point because it’s less crowded than Surfrider and I love coming to Malibu because of the unique geography,” says Heidi. “It’s locked between the mountains and the ocean and that’s also why it’s so exclusive: if you are famous with money you can simply stay there and be protected there and know other people who are famous with money, which makes those people very comfortable.”

My next stop is nearby Zuma Beach, a sun magnet for locals and families, where I find roadside stalls selling crystals and fresh, juicy strawberries. In winter, Point Dume, at Malibu’s north end, is the ideal perch for spotting migrating grey whales, but it’s not my lucky day so I head to the Getty Villa instead. “If the California Dream was a hotel, we wanted that hotel to be The Surfrider,” says owner Emma. Photo / Supplied

The original home of the Getty Museum, which opened in 1974, focuses on Ancient Greek and Roman Art and admission is free but you need to make a reservation. You can while away an entire day in the majestic building and vast landscaped gardens, but for more contemporary, beachy masterpieces swing by the 30 vintage surfboards on display at the Surf Museum at nearby Pepperdine University’s Payson Library.

Another place to visit is the Spanish Revival-style Adamson House, with local history displays in its Malibu Lagoon Museum, or for Eames obsessives, a wish-list moment is visiting Eames House, the actual residence of mid-century modern design legends Charles and Ray Eames.

When you begin working up an appetite, you’re spoiled for choice when it comes to food in Malibu, so you could eat at Malibu Farms, the upmarket organic cafe and restaurant right on the pier, or grab one of the famed ahi tuna burgers from Malibu Seafood to takeaway and eat it on Dan Blocker Beach across the road. Saddlerock Ranch is set on more than 400ha in the Santa Monica mountains. Photo / Supplied

The beauty of Malibu is that although it is nicknamed Billionaire’s Beach, after its original makeover by Hollywood mogul David Geffen, you can enjoy the sun and surf lifestyle whatever your wallet size, swimming and wandering the trails through the canyons and grasslands of the spectacular Santa Monica Mountains. If you do have a little cash to flash, certainly avail yourself of private surf lessons and yoga classes, or perhaps a facial or massage at Cure day spa, which offers an array of beauty and wellness options.

READ: 5 Epic Fiji Day Trips To Suit Just About Everyone

If you’re after romantic solitude you may want to seek out a beach other than Surfrider, but the payoff for battling the crowds is basking on a stretch of sand declared a World Surfing Reserve that has been made famous by everyone from Gidget to just about every surf legend you can think of. If you surf, its three point breaks suit both long boarders and short boarders, and if you’re wanting to learn, don’t be deterred as the vibe is friendly and laid back.

If surfing is not your thing, head to Malibu Pier and enjoy some of the best people-watching, from billionaires to beach bums. Malibu Pier is enjoying a comeback thanks to a restoration that includes retail as well as dining, and it’s also good for fishing: you can rent or buy a line if you didn’t bring one.

Back at The Surfrider, my favourite room turns out to be the library, with custom-designed furniture by Croft House LA, eclectic vintage pieces such as the 120-year-old Iranian rug and books on surfing, design and architecture. 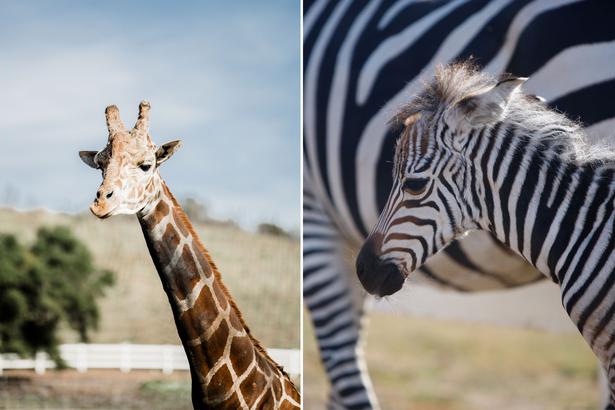 There’s an artwork titled Pray for Surf, by Ali Beletic, and an original print series by Swiss-French architect Le Corbusier, along with plenty of coffee and filtered water for staying hydrated and caffeinated. The hotel provides a handy guide of other local activities, which run from driving to nearby Topanga Canyon, which oozes 60s California charm and is another great spot for surfing and people-watching, but I’m content to laze with a book before heading next door for something more down-at-home. Casa Escobar is a small, family-owned taqueria that serves authentic Sonoran recipes as well as dishes from Veracruz and Oaxaca, along with some of the most refreshing margaritas in town.

Acts that have graced the stage of the large outdoor beer garden include Jerry Lee Lewis, The Doors and Tom Petty and when I pull up a stool at the bar it’s in full festive mode thanks to the annual Cinco De Mayo Mexican street fiesta taking place that weekend.

READ: Where To Eat, Drink & Shop In Anaheim

After listening to the live band for a couple of hours I’m ready for dinner, and although I could take my pick of Japanese at Nobu Malibu or the delicious Gjelina Italian in nearby Venice, it feels like a crime not to take advantage of The Surfrider’s rooftop deck, which is restricted to guests. It feels like a private members’ club, but without the snobbery, and serves up a California-coastal menu with a focus on organic and local that it bills as “anti-hotel food”.

What that means in practice is a tight edit of easy dishes made for sharing over a sunset cocktail by the fire. I take mine from the friendly bartender, grab a complimentary blanket to ward off the evening Malibu chill and toast a perfect stay in a part of California that, like Stanley, I would be very happy to call home.

What To Wear For Your Next Tropical Holiday

Escaping to warmer climes? Dress accordingly with a wardrobe that evokes the sunshine and style of your final destination