From Marrakech With Love: The Vivid Sights & Sounds Of Morocco

Courtney Whitaker travels from Marrakech to the Atlas Mountains, discovering the ancient and modern treasures of Morocco

"It’s going to be hot tomorrow,” says our waiter, gazing across the breakfast table and over to the mountains beyond. The pink-hued overlapping peaks are blanketed in a foggy haze, and the sun is, for the moment, elusive.

“Hot” in Moroccan terms really means quite stifling; it is already 30 degrees in the Atlas Mountains and barely 10am. The cool waters of the pool below the terrace are beckoning. I stare at the glorious breakfast banquet before me and realise I have a mountain of food to climb before I can make a dash for the pool.

There’s a fine art to getting into a holiday routine: each activity, be it eating, swimming or sleeping, must be ideally timed so as to make the most of the experience.

It is a hard adjustment from the routines of “real life” and, jetlag be damned, I am going to adjust. And so is my stomach. 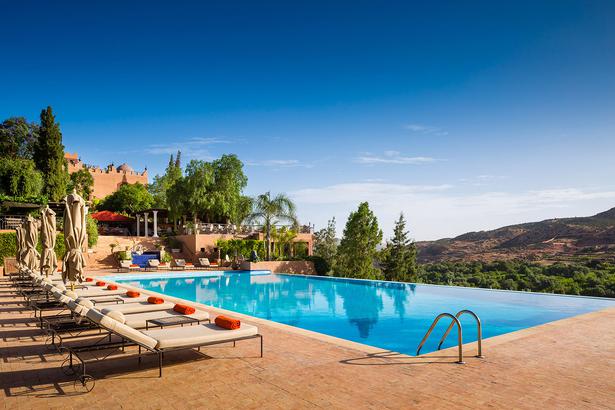 The trip from Marrakech to the Atlas Mountains is supposed to take roughly an hour, on newly sealed, modern roads, but with stops it takes us much longer. The redness of the surrounding clay hills has us ooh-ing and aah-ing. Our driver explains it is iron oxide that creates the vivid colour. The mineral-rich clay, or rhassoul, is known for its health benefits and has been used by generations of Moroccan women as a treatment for skin and hair.

We pass many colourful villages with masses of pottery for sale on the roadside: handpainted platters, tagines of all sizes, bowls, jugs... I wish my suitcase would hold all of it, as well as the handwoven rugs hanging in the next shop.

READ: An Expert's Guide To Starting A Ceramic Collection

Our driver, Mohamed, stops on the side of the road. “You need to see this, it’s Azrou.”

Azrou is a small and beautiful Berber village, near the larger village of Asni, and built from the red clay it sits on. Azrou is a Berber word meaning “rock”, Mohamed explains.

There couldn’t be a better name for this place. Its mudbrick houses are nestled into the rocky hills, blending in so seamlessly it looks as though the village has been there as long as the mountains themselves. 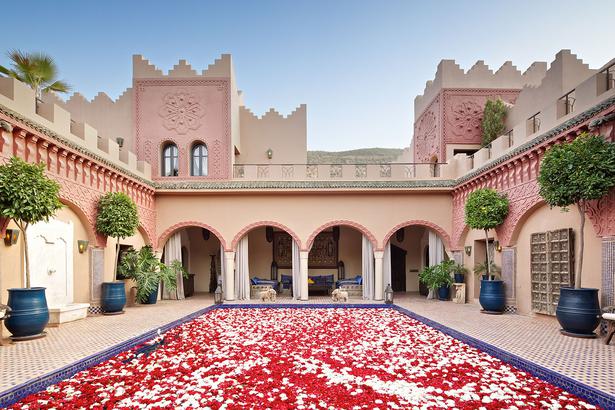 We continue on through a windy gorge with vast drops into a ravine below. We are in the High Atlas mountains now, and at our next photo stop we notice the temperature is around 3-4 degrees cooler and, thankfully, there is a breeze.

We are nearing our final destination: Sir Richard Branson’s Kasbah Tamadot. Our mountain home for the next five glorious days.

Sir Richard bought the Kasbah, once an old fortress, more than 10 years ago and has created a luxurious retreat, still true to its history and sitting comfortably in its exotic surroundings.

His mother, Eve, has done much to help the villages here, including setting up the Eve Branson Foundation, which has a carpet workshop and craft house run and managed by locals.

Of the staff at the Kasbah, 95 per cent are Berbers from surrounding villages.

These people are able to tell, just by looking at the mountains, what the weather will be like that day, or the next. Fog means heat. Clear skies mean you’ll get a nice mountain breeze. Some Berbers speak several languages, including French, Arabic, English and local dialects, and visits to their villages are suggested day trips from the hotel.

We decide on an excursion up to the village of Armed for lunch, forgoing mules in favour of some good old-fashioned exercise. We are driven to the nearby village of Imlil to start the hike and begin our journey up to Armed, at an altitude of 1900m. 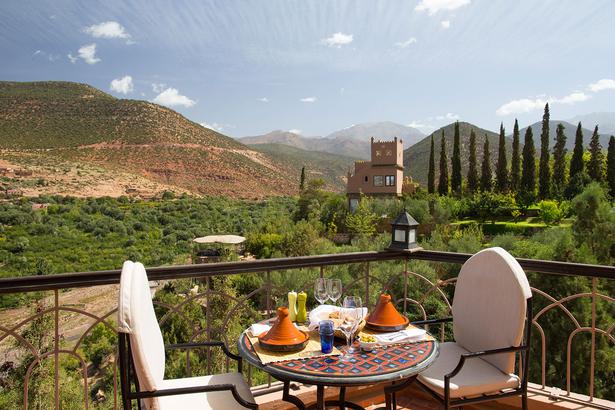 Our guide, Jamal, points out the trees along the way: walnuts, cherries, apples, quince. Fruit grows well in this climate. We pass women with baskets of vegetables and a sheep or two in tow, groups of young boys wearing football shirts, and flat-roofed mudbrick houses.

A man comes flying down a steep gravel hillside, sitting side-saddle on a donkey and holding a baby goat. We let him pass and marvel that he can balance on such a precariously steep path.

READ: Annabel Langbein Travels To France On A Journey Of Discovery

An hour later we reach our destination, where we are served a traditional Berber lunch at the highest point in the village, with stunning views. The people here are gracious hosts and we are given generous portions of tagine, salads and fruit, before embarking on the trip back down the mountain. It is a truly unique experience.

But there’s really no need to leave the walls of the Kasbah if your aim is to just switch off. It’s an exotic paradise with all the comforts of a modern luxury hotel, except you’re in the middle of absolutely nowhere. In Morocco. And the village across the river, Tansghart, won’t let you forget it. The humbling calls to prayer from the village mosque filter over the valley throughout the day. 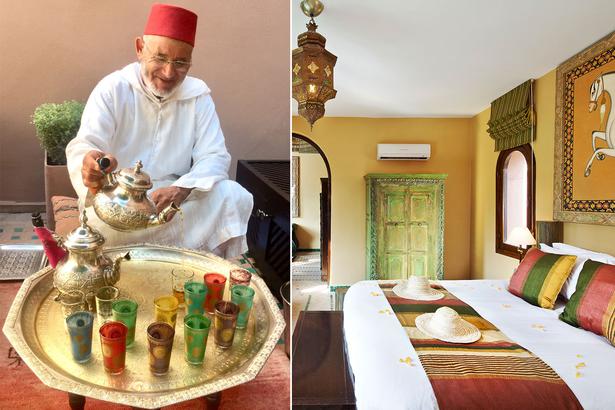 Along with 28 rooms and suites, the Kasbah has 10 luxury Berber tents. A similarly luxurious tent houses the Asmoun Lounge, a lovely spot to retreat to with a glass of wine in the evenings, either on the wraparound balcony, or inside near the fireplace and billiards table.

The property also has a farm, with donkeys, goats, and a camel. Peacocks wander the grounds and stop to inspect the towels on loungers by the pool; they appear unperturbed by the presence of humans.

Bread is baked on site each day in a traditional Berber oven and the trees lining the footpaths are laden with plump green apples. There’s a spa where you can be doused in fragrant Le Sens de Marrakech oils, a gift shop and a restaurant. Then there is Mohamed the tea maker, who will serve you the best traditional mint tea you will ever taste.

Plus there’s a pool. Actually, there are three, but who’s counting?

We had come to the Atlas Mountains fresh from Marrakech. The old city is a heady riot of noise, colour and dust. 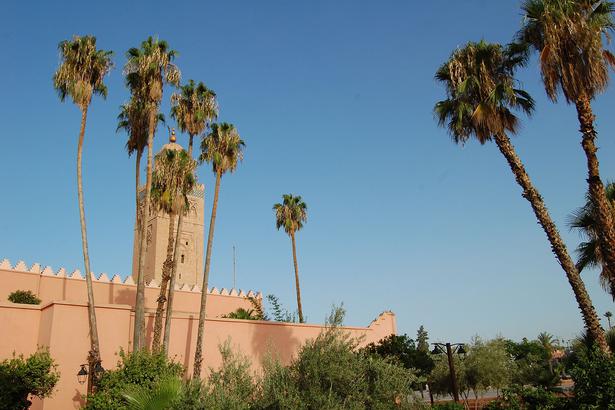 Men guide donkeys pulling carts along narrow streets and it pays to watch your step as you navigate the potholes and uneven surfaces of the road. Heels are not advised, and, if you are entering the old medina, neither are revealing clothes. After all, you are in one of Morocco’s four Imperial Cities, so it is wise to show some respect to its incredible history.

The Red City is more than 950 years old and has one of the largest souks in Morocco. Its medina is a Unesco World Heritage site and sits behind nine-metre high, two-metre thick ramparts, the oldest sections of which date back to the 12th century.

Once these walls protected the inhabitants inside. Now, the medina gates are open to tourists from all over the world, who head here in droves to see the treasures hidden inside.

The week of our stay coincides with Eid Mubarak, and locals are buzzing ahead of this much-anticipated festival. Sheep are packed into crates on top of cars, or guided in flocks down the road. It makes for quite a spectacle, and we are told this is an exciting time for families, whose members travel considerable distances to be together.

In a square near the medina walls sits the amazing 800-year-old Koutoubia Mosque, replete with decorative arches and turquoise ceramics. It is the largest mosque in Marrakech. If you choose to get lost in the infamous souk — and there are no street signs — look (or listen) for the mosque for directional guidance. 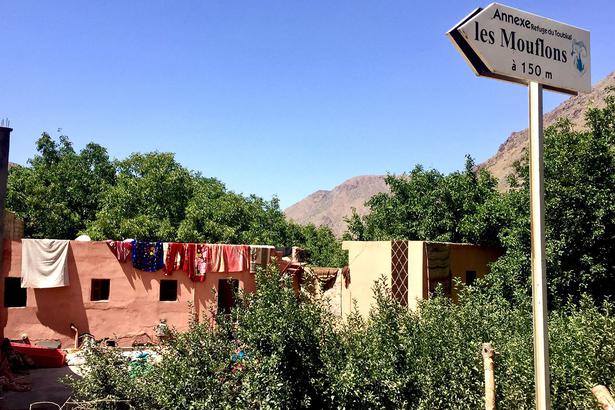 Hiking path to the village of Armed, in the High Atlas Mountains. Photo / Courtney Whitaker

In the souk of Jemaa el-Fnaa, you will be rewarded with a shopping experience like no other. But be prepared to step outside your comfort zone.

READ: Around The World With Jane Daniels

We venture into the square and pass by snake charmers, men with pet tortoises, people singing and playing instruments and women applying henna to eager tourists.

The street food in the markets is an experience in itself. “Welcome! I’m the Moroccan Jamie Oliver,” one man cries. He lures us in with promises of pastilla (Moroccan pigeon pie), couscous and meat skewers. Whichever vendor you choose, be prepared to eat well, and be entertained.

But this great city is not all snake charmers and market haggling. If you are after a break from the buzz of the medina, the Majorelle Garden is a tranquil spot to visit during the day, with a fascinating history to boot. 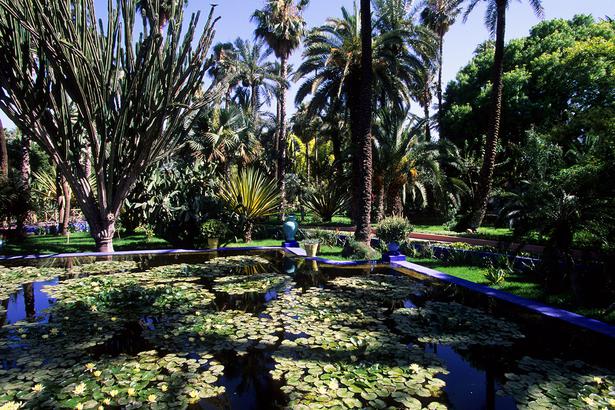 This botanical garden is a dream, with beautiful plants, fountains and bright pops of colour.

In 1966 Yves Saint Laurent and partner Pierre Berge visited the property and were “seduced by this oasis where colours used by Matisse were mixed with those of nature”.

They bought the garden in 1980 and lived in their Villa Bou Saf Saf while the garden was carefully restored with respect to the vision of the original owner, the painter Jacques Majorelle.

The artist’s former studio within the garden is open to the public as a museum dedicated to Berber culture. It also contains the personal Berber collection of Saint Laurent and Berge. The street the garden sits on now bears the designer’s name.

Following the Frenchman’s death in 2008, his ashes were buried in the Majorelle Garden, in the vibrant and complex kingdom of Morocco: a country close to his heart — and now close to mine.

London chef Yotam Ottolenghi talks us through his Mediterranean travels