For a while there, it looked like Normal People was going to be the drama of the year. It was a sublime piece of television with two captivating leads, and deserved all the plaudits thrown at it. But then along came I May Destroy You, making Normal People look like a quaint romance from last century.

“Groundbreaking” is an overused word in television. But Michaela Coel’s 12-part series is the real deal. It is unlike anything we’ve seen before. Coel has taken the conventions of episodic drama and binned them. Just when you think you know where it’s going, she does something utterly unexpected. Watching it is exhilarating.

The show is autobiographical, but that description doesn’t do it justice; Coel isn’t so much writing down her thoughts as letting them spill out in an act of therapy as well as creation. That’s not to say she’s giving us an unedited stream of consciousness - she produced 191 drafts before she was satisfied.

She is writer, executive producer, co-director and star, and she turned down a £1 million offer from Netflix because they would not allow her to retain copyright.

I May Destroy You begins as a fictionalised story of Coel’s own sexual assault. In 2016, her drink was spiked in a bar and the next day she had a flashback of a man looming over her. This realisation comes to Coel’s character, Arabella, at the end of episode one.

Imagine this happening in a bog-standard drama - ITV’s Liar, say - and the horrified look that would spread across the actress’s face. Arabella raises a quizzical eyebrow, gives a little “hmm” and the credits roll. At that point, if not before, you’re clear that this drama is going to unusual places.

WATCH: I May Destroy You trailer

In the hands of another writer, this story could have been a whodunnit as Arabella pieced together the events of that night. On social media, viewers tried to guess the identity of the rapist: was it her seemingly lovely flatmate? Would that be the twist? But Coel has given us something thrillingly radical. There is no twist. Life doesn’t consist of events with neat resolutions, so why should drama?

The show pulses with an energy that feels drawn from its London setting - Arabella’s character is sometimes hyper, sometimes drug-fuelled, always searching for something even in her moments of repose - but as the episodes go by you realise it’s not plot that we’re required to follow, but character. 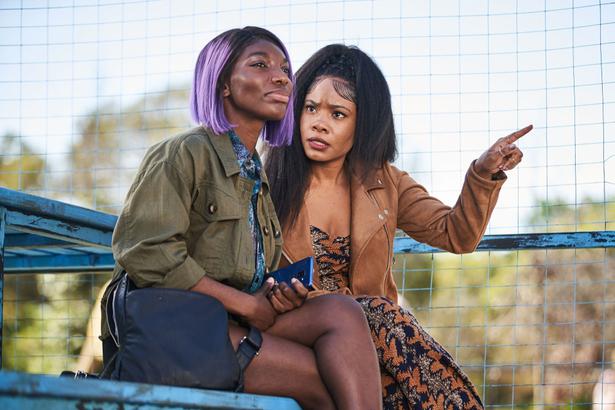 Michaela Coel as Areballa alongside Reanne Weruche Opia as best friend Terry in 'I May Destroy You.' Photo / Supplied.

Arabella’s breakout hit as a writer was called Chronicles of a Fed-Up Millennial. It’s a generation that is often mocked for being self-absorbed. But, as far as Coel is concerned, introspection is good for the soul.

At the start of the series Arabella is working on a new manuscript and Coel recently shared a passage from it, though the words never made it to the screen: “We are the generation that decided, if you won’t look at us, we’ll look at ourselves.”

It is a meditation on race, sex, consent, friendship and identity. Every one of these comes with contradictions. In a world that feels increasingly as if it can only deal in absolutes, when the dreaded “cancel culture” demands we take a righteous “for” or “against” position, Coel gives us nuance.

At a febrile moment in the Black Lives Matter debate, a black writer is showing us the myriad ways in which racism manifests itself, but also how reductive the debate can be - race intersects with class, sexuality, gender and wealth.

Worlds separate Arabella and her supercilious publisher, Suzi, though they are both black women. We are at the cringe-worthy stage of white, middle-class television commissioners insisting that dramas have black actors, but making sure they’re invariably cast as “good” characters. Coel’s characters are black and they’re flawed, because isn’t everyone?

Sexual assault, and the way in which boundaries become blurred, has never been explored on screen as intricately as this. One of the cleverest episodes sees Arabella’s sweet-natured gay friend Kwame (Paapa Essiedu), recovering from an assault by a Grindr hook-up, dating a girl.

They have sex, and afterwards she makes some clunking, would-be woke references to loving “black guys”. Oh God, you think, she’s dreadful. But then she discovers that Kwame is gay - something he failed to mention before sleeping with her. He is as far from a sexual predator as it’s possible to be, and yet he has become a perpetrator. It’s complicated. Every character receives Coel’s empathy and understanding.

In the final episode - spoiler alert if you haven’t been watching on iPlayer - Arabella and her friends track down the rapist and mete out justice. Just when you’re absorbing this genre switch to revenge fantasy, it becomes clear that this is just one of several alternative realities. In another, he is a pathetic, unthreatening figure; in the last, they are in a consensual relationship. This, you understand, is part of the healing process. The last one stops you in your tracks.

A couple of years ago, Coel gave a powerful keynote address to an audience of television executives at a media festival. In calm and measured tones, she called them out for their prejudices - the time she turned up on the set of her debut show, Chewing Gum, to find five black cast members sharing a trailer and one white actress given her own; the unedifying sight of channel bosses and production companies and streaming services fighting to sign up black and Asian voices “like kids in a playground scrabbling for sweets”. Some of those listening didn’t realise, until that moment, that they had prejudices.

She went on to detail her assault with compelling honesty. I May Destroy You is a dramatic version of that speech, an essay in feature form. And, like her speech, it is filled with humour. Jokes in the middle of a drama about rape? Well, yes. If you’re funny, you don’t stop being funny because a bad thing happened to you.

It’s possible that you haven’t watched this series because you didn’t think it was for you. Yet even if I May Destroy You doesn’t resemble your life, you can feel the truth of it in every line. The show is a blazing triumph. Hopefully, it will pave the way for other writers to be bold. But if we want another drama as accomplished as this one, we’ll have to wait for Coel’s next act.

I May Destroy You is currently playing in New Zealand on Neon.