What It's Like To Experience A Holy Mountain Retreat In Koyasan, Japan

Up a mountain, following in the footsteps of a revered 9th-century monk, it’s hard not to wonder what message the heavens are sending as steady rain becomes torrential, interrupted in intensity only by claps of thunder.

We wend our way past Buddhist graves to the mausoleum of Kobo Daishi, passing by little stone statues of children wearing bibs. The scent left on the bibs is said to better help compassionate Bodhisattva find and guide the prematurely taken on their ascent to heaven.

Under the dripping pines we come to a pyramid to more lost little ones, built for families who cannot afford an individual monument in what is Japan’s biggest cemetery on Mt Koya.

Back up the snow-edged path, a monk in cotton robes chants in front of a burning cauldron in an offering hall.

This is one of Japan’s most spiritual sites, where Kobo Daishi returned from study in China to found the Shingon Buddhist sect in 805. The story goes that the monk-scholar (credited also with developing Japan’s kana writing script) searched the countryside before settling in this remote basin. It is surrounded by 1000m peaks formed in the propitious shape of a lotus flower. Over 12 centuries, more than 100 temples have been built within this area of a few square kilometres. It draws two million visitors a year and has been declared a Unesco World Heritage Site. Among the historic mausoleums are those for important warlords and religious figures, seeking to rest near the monk, who is believed to be in eternal meditation.

To this day, getting to Koyasan is a trek. Those relying on public transport typically travel from Osaka, south and inland on several trains and then by cable car. Early pilgrims walked, with women barred from entering the town until the late 1800s. They were allowed to skirt around it to reach Okunoin cemetery and pay homage at Kobo Daishi’s mausoleum. Here, lamps given by emperors in 1088 and 1948 still hang.

I take the fast track route to Koyasan, travelling in a mini-bus with a small group. We pass a few brave early spring blossoms on the lower slopes, before spiralling up darkly forested hills to the alpine town. It has about 3500 permanent residents — a third of them monks — but today the main street is all but deserted. Due to its historic importance and seasonal beauty, visitor numbers swell dramatically as the weather warms.

Koyasan is a remarkable place to experience a simple Japanese-style stayover. An increasing number of overseas tourists are joining the locals in overnighting at one of the town’s 50 or so temple guest houses, known as shukobo, making this the best set up place in all Japan for Westerners to try this experience. Similar to ryokan, in that they offer traditional accommodation (usually with shared bathing facilities), these temple lodgings give guests a glimpse into the simple, ordered life of the monks. Days start with early prayers and guests can watch quietly or join in should they wish. Food is shojin ryori, vegan temple cuisine.

Although Shingon is an esoteric Buddhist sect — pine needles rather than flowers feature in temple offerings — it is not without aesthetic appreciation. Some of the shukobo and rather more of the temples are home to significant artefacts. The country’s largest rock garden is here, with stones laid out to resemble the shape of two dragons.

READ: Dining Out in Beijing

Valuable Edo-period paintings on screens decorate the Kongobu-ji temple complex. Photography is not permitted. Out the back there’s a kitchen able to cater for 2000 people, with giant rice pots that were in use up to a few decades ago. A long table on chains is hoisted high and was used to keep food safely stored above ground level.

Although visiting Koyasan independently is possible, the insights that come from our tour guide, Shomi, provide invaluable context. An example is the quirky fact that one of the mausoleums we passed was dedicated to termites, erected by a pest extermination company to atone for its trade. Commerce and religion clearly co-exist here, with new sites in the cemetery now highly sought after for large edifices for the wealthy or corporations.

READ: The Rise of Tokyo Style in New Zealand

In the older parts of the cemetery, along the 2km walkway to Kobo-Daishi’s mausoleum, it’s a spookier connection of faith and funerary.

We check into our Hongakuin temple accommodation after several hours of under-umbrella exploration, with a sure sense that a sunnier Koyasan would still have much to reveal. The shukobo’s sole English-speaking monk suggests we retire to thaw out in our individual rooms with tea and our legs extended under the kotatsu (heated table). 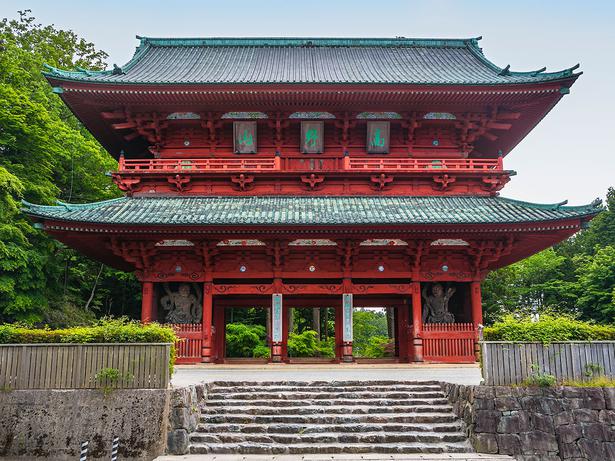 The etrance gate to the sacred site of Koyasan. Picture / Getty Images

Dinner is served early and it is the custom to bathe beforehand. First the women, then the one man in our small group take a steaming bath before putting on yukata. We eat as a group, seated on cushions on tatami mats, wearing cosy supplied kimono-style robes, topped with a shorter jacket for warmth.

The delicious and varied vegan bento box, includes a local speciality tofu that is freeze-dried then rehydrated, a silken tofu, broth, and an ample selection of vegetables, mountain herbs and pickles, all beautifully presented.

Bedtime beckons and I have no trouble sleeping soundly on the futon-mattress on the floor under a cosy duvet.

The next morning I awake too late to look in on prayers, but give thanks that my visit to Koyasan at this time of year is in the age of heat pumps. As we leave, the sight of fresh snow dusting the lodging’s gardens sends my spirits soaring.

• Janetta Mackay travelled to Japan as a guest of Cathay Pacific, which flies from Auckland to multiple destinations there daily, via Hong Kong, where stopovers can be made. See Cathaypacific.co.nz. Travel to Koyasan was with Wendy Wu Tours, which runs small group itineraries and also offers tailor-made individual trips with local guides. Visit Wendywutours.co.nz

The talented duo share where they ate, drank, shopped and visited during their art-filled trip

Morgan Sibbald, of jewellery brand Zoe & Morgan on his love of crystals, and how life in Bali informs his designs

Great Places to Eat in Tokyo

With a passion for seafood and all things Japanese, Auckland restaurateur Nic Watt of Masu shares his whirlwind culinary advent...