Volez, Voguez, Voyagez – Louis Vuitton
Curated by Olivier Saillard, this Tokyo exhibition follows Louis Vuitton’s expansive journey from 1854 through to present day. The final section is dedicated to the brand’s strong ties with Japan, including collaborations with artists such as Takashi Murakami and Yayoi Kusama.
— Chiyoda-ku, Tokyo, April 23 - June 19

Moses, Mods and Mr Fish: The Menswear Revolution
This exhibition takes a look at the evolution of men’s fashion over a 150 year period, with a focus on the 60s and emergence of the mod movement in London.
— The Jewish Museum, London, until June 19

The Work of Issey Miyake
The fashion designer’s highly complex garments are known for their clever and often unprecedented use of technology, and this exhibition surveys his extensive 45-year career. A dedication to the relationship between a piece of cloth and the body has resulted in an extensive archive of highly intriguing and intricate garments.
— National Art Centre, Tokyo, until June 13 Undressed: A Brief History
This new exhibition charts the history of underwear from the 18thCentury to today, covering corsets and crinolines through to G-strings and Calvin Klein waistbands. Curator Edwina Ehrman investigates the interaction between the cut, fit, fabric, decoration of undergarments and their relationship to gender, sex, and the body ideals of the times.
— Victoria and Albert Museum, London, until March 12, 2017

A History of Fashion in 100 Objects
Bath’s Fashion Museum selects 100 items from the 1600s to the present day, offering an insight into fashion moments in history and their relationship to the social landscape of the times.
— Fashion Museum Bath, England, until January 1, 2018

Dressing Downtown
Showcasing almost 40 period costumes from Downton Abbey, giving diehard fans the chance to get up close and personal with costumes that have been worn by their favourite characters.
— Driehaus Museum, Chicago, until May 25

Oscar De La Renta: The Retrospective
Celebrating the designs of the late Oscar De La Renta, with 130 looks spanning five decades. The exhibition is curated by Andre Leon Talley, former American editor-at-large for Vogue magazine, whose lifelong friendship with the designer brings an intimate perspective.
— Fine Arts Museum of San Francisco, until May 30

Isaac Mizrahi: An Unruly History
The first exhibition to explore the career of fashion designer Isaac Mizrahi, whose work also crossed over into film, television and the performing arts. On display are 42 looks, including costumes from the theatre and opera plus original sketches, video installations and behind the scenes images.
— The Jewish Museum, New York, until August 7

200 Years of Australian Fashion
The first major survey of Australian fashion, the exhibition features historical pieces from the past 200 years, as well as looks from designers such as Dion Lee, Ellery, Romance Was Born and Toni Maticevski.
— National Gallery of Victoria, Melbourne, until July 31 Missoni, Art, Colour
A celebration of the rich heritage of the Italian Missoni family, known for their knitwear and use of colour and craft. 60 years of fashion will be on display, alongside works from the likes of Sonia Delaunay and Lucio Fontana - artists who played a big role in influencing founders Ottavio and Rosita Missoni.
— Fashion and Textile Museum, London, May 6 - September 4

Bellissima: Italy and High Fashion 1945-1968
This exhibition takes a look at the period that ushered in the rise of Italian high fashion, aka alta moda. It explores the influence of art, architecture, filmmaking and theatre on Italian fashion during this highly creative time, including Italian masters such as Valentino, Fendi and Emilio Pucci.
— NSU Art Museum, Fort Lauderdale, until June 19 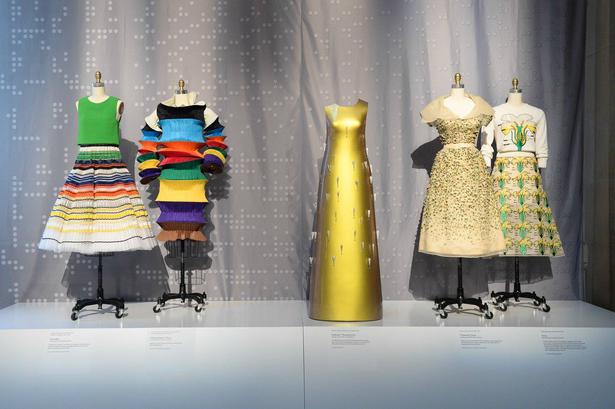 Looks that take advantage of new design technologies from Manus x Machina: Fashion in the Age of Technology. Picture / Facebook

Manus x Machina: Fashion in the Age of Technology
The Costume Institute's major 2016 fashion exhibition will explore the interaction between the handmade and the machine-made. More than 100 pieces will be on display, with examples of intricate haute couture techniques alongside garments that embrace the latest in design technologies.
— Costume Institute, The Metropolitan Museum of Art, New York, May 5 - August 15

The Vulgar
Vulgarity in Renaissance fashion and the 18th Century will be explored in this exhibition, as well as showcasing contemporary designers whose work embraces and challenges this notion.
— Barbican Gallery, London, October 13 - February 5 2017