"Full agreement if plenty of water," stated the telegram. It was sent in spring 1958 by Christopher Tennant, 2nd Baron Glenconner, to his son, Colin. The 32-year-old Scot, who dressed with a dandyish flair and had a quick temper, was proposing to buy a tiny, beach-scalloped island in The Grenadines for $88,000 without even stepping ashore.

Only four kilometres by two-and-a-half, its name made blunt reference to the prolific mosquitoes and there were neither roads nor jetty. Needless to say, Mustique had no water supply beyond the rain that occasionally fell on its palm-dotted shores.

From such a whim-fuelled stab at adventure, one of the world’s most exclusive and enchanting holiday islands was born.

Just 160 kilometres west of Barbados, Mustique is today home to around 100 fabulous villas, along with two charming boutique hotels, immaculately kept white-sand beaches, a sweet little library and thriving equestrian centre, plus a large number of red-footed tortoises who manifest zero interest in the cavalcade of rock stars, royalty and dismayingly young self-made rich who come to relax in this minuscule paradise.

How did this come about?

A flamboyant and wealthy showman with top-drawer connections, his masterstroke in developing Mustique came two years later, in 1960, when he asked the recently engaged Princess Margaret and Antony Armstrong-Jones (later Lord Snowdon) if they would prefer “something in a small box from Asprey, or a piece of Mustique as a wedding present”.

Later that year, honeymooning in the Caribbean on the Royal Yacht Britannia, Her Royal Highness duly checked out her gift. Mustique reminded her of Kenya — and she was “burnt to a frazzle” — while her husband christened it “Mustake”.

Tennant’s next triumph was — at Princess Margaret’s suggestion — to engage the effervescent theatre designer-turned-architect Oliver Messel to design the first properties on the island.

These included The Cotton House (now a 17-room hotel), the villas Clonsilla and Phibblestown (named after Irish villages and owned by the Guinness family), and Les Jolies Eaux, Margaret’s happy hideaway set on a panoramic 10-acre plot at the island’s southern end.

Today, the Mustique Company — which was created in 1968 to develop and administer the island and is now zestfully celebrating its 50th anniversary — offers 10 Messel Masterpiece villas for rent.

For many, they are a key reason to visit, with their graceful indoor-outdoor vistas and trademark use of sage green or canary yellow. Clonsilla is particularly rich in original features, but others of note include Samambaia and Blue Waters.

For the first two decades, life was enjoyed a la Robinson Crusoe. “Nothing worked,” Princess Margaret recalled. “We didn’t care.” 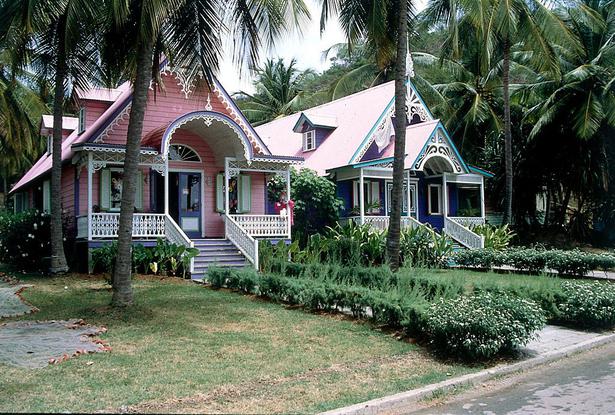 At 6pm, when the ladies turned on their hairdryers, all the lights would blow. How wonderful this was in reality is hard to gauge, but Mustique is now immeasurably improved, its villas a bedazzling swirl of infinity pools, media rooms and long-serving uniformed staff.

Today, the “mules” (heavy-duty golf carts) traditionally used to get around have been joined by Smart cars and electric Hummers. The island now has 630 vehicles — a far cry from when Tennant imported a self-assembly jeep from Neiman Marcus that took three days to put together, only to find the key was missing. In frustration, he kicked it so hard he broke his toe.

To its credit, the Mustique Company has, like the chatelain of a stately home, done its best to keep the charm while moving with the times.

“The flight in is a great leveller,” explains its managing director, Roger Pritchard, referring to the fleet of smartly liveried, 18-seater Twin Otters that bring homeowners and visitors to the island’s tiny bamboo-and-thatch airport. “You really do only need flip-flops and a sarong”, pipe the guidelines, a subtle hint that this is very much a bling-free zone.

READ: Why The Royals Have To Be Fashionable

By comparison, other small-island luxury getaways seem to have forgotten the point of the Caribbean holiday. On St Barts, life is too public and dressy, Jumby Bay (the private island resort in Antigua) is dull, while Canouan — Mustique’s Grenadine neighbour, with its golf course, marina and new Mandarin Oriental resort — simply doesn’t have the pedigree.

Mustique takes a different tack. Private jets and helicopters are banned, although some superyachts do call in with a chopper on board. “If they fly over, we just drop our trousers and moon at them,” Pritchard says with a grin.

The fun times haven’t gone away, then — just changed. “There was no TV and much more entertaining before,” says Selwyn Trimmingham, who has worked as a butler for 19 years at Obsidian, a Messel villa originally owned by the society photographer Patrick Lichfield.

In the past, everyone knew everyone, but now there are multiple parties at night and, come high season, the Tuesday-night cocktail party at The Cotton House (be sure to engineer your dates to catch this) can draw 500 guests.

Inevitably, Tennant’s dream turned sour. Setting things up is always fun, but who wants to run them day after day? By the 1980s, Messel’s subtle stages for tropical living had given way to all-bells-and-whistles power-homes epitomised by The Terraces, an ostentatious hilltop Tuscan mansion with its own power plant and a staff of 25.

“What you have to realise is Mustique is a fantasy island,” explained David Bowie, who joined the revels in 1987 with his seven-bedroom Balinese extravaganza now known as Mandalay.

The castles-in-the-sun mood lives on. One of the best impress-your-mates villas you can rent is Tommy Hilfiger’s six-acre, eight-bedroom, nine-staff Palm Beach estate, which feels like a walk-in set for a fashion shoot — complete with blazing white sands that have clearly enjoyed the littoral equivalent of cosmetic surgery.

Masterfully designed, this is the right sort of flash — the only snag is the bill of $80,250 upwards for a week here. 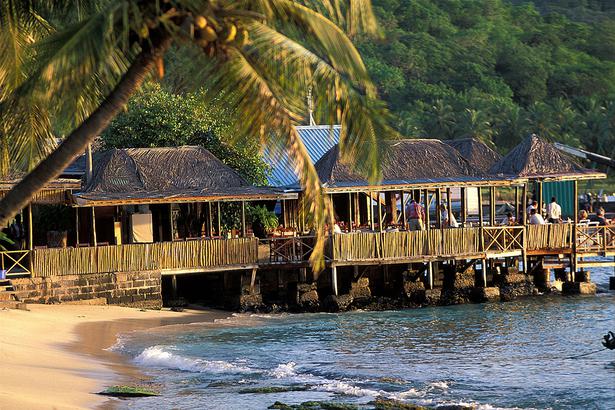 Such properties are fun to visit, but I wouldn’t choose to holiday in their domineering architecture — if cool and contemporary is your beach bag, have a look at more restrained numbers such as Antilles, Marguerite and Mimosa.

In 1987, Tennant (now Lord Glenconner) sold up, taking his white kaftans and umbrage to St Lucia, where he amused himself by importing a young Indian elephant, Bupa. Two years later, Princess Margaret paid her last visit to Mustique.

Let’s not mourn, though — today the shimmeringly beautiful Les Jolies Eaux comes with a 40ft pool, a fat volume of juicy cuttings about her, and one of the best chefs on the island, Judi Duncan. The views are heaven-sent, while a swim in the nearby sandy cove of Gelliceaux Bay, reached by private steps, is as sweet as ever.

Today, a 13ft-tall statue commemorates Mustique’s eccentric creator — not far from another, of copulating tortoises, bequeathed by the late poet and publisher Felix Dennis, another Mustique character.

“Tennant may have been barking mad,” reflects Liz Clayton, co-owner of the seven-room Firefly Mustique hotel, which she bought sight-unseen 23 years ago, “but Mustique evolved from his passion”. And that’s the twist.

His lordship’s crazy paradise wasn’t birthed by accountants with a beady eye on the revenue stream — hence the enduring success.

Where will Mustique head next? This year’s 50th anniversary has seen Basil’s Bar spruced up by Philippe Starck and the launch of a 38ft speedboat, Lady Anne — named in honour of Tennant’s wife.

Preserving the beauty of the island, which boasts exhilarating walking trails, a sanctuary for retired horses and turtle-rich waters, is crucial — the musician and long-term resident Bryan Adams recently instigated a successful coral restoration project in Endeavour Bay.

“Mustique was always kinetic, organic,” Tennant once said, “created like a party to be enjoyed for a night.” He was wrong — down in the Grenadines, this little A-list shindig has been running for over half a century, and it’s still well worth joining.