Picture yourself lying under a beach umbrella with one of these riveting reads, released this year

If, like us, you've been staring at a growing pile of books waiting to have enough time to read them, never fear! The summer break is nearly upon us.

We recommend adding these new releases to your list: Catch & Kill: Lies, Spies, and a Conspiracy to Protect Predators by Ronan Farrow
Journalist Ronan Farrow is one of the people instrumental in the explosion of the #MeToo movement thanks to his Pulitzer Prize-winning reporting on the Harvey Weinstein scandal for the New Yorker. Jodi Kantor and Megan Twohey were the first to break the story in the New York Times, and while their book, She Said: Breaking the Sexual Harassment Story That Helped Ignite a Movement, about the ordeal is also a worthy read, Catch & Kill reads like a real-life spy thriller.

While reporting on the Weinstein scandal, Farrow was trailed by “shadowy operatives, from high-priced lawyers to elite war-hardened spies” — in an attempt by Weinstein and his team to intimidate the journalist into ceasing his investigations. A look into the rampant abuse of power that allowed the harrassment to go on for years, Catch & Kill sheds new light on the investigations that changed our culture.

Girl, Woman, Other by Bernardine Evaristo
The co-winner of this year’s Booker Prize, along with Margaret Atwood for The Testaments, Evaristo’s novel is a “love song to modern Britain and black womanhood.” Following the lives and stories of 12 different characters, Girl, Woman, Other is alternately hilarious, devastating and illuminating. It’s remarkable how well Evaristo communicates each distinct character’s voice to the reader, and is a vibrant, contemporary read. 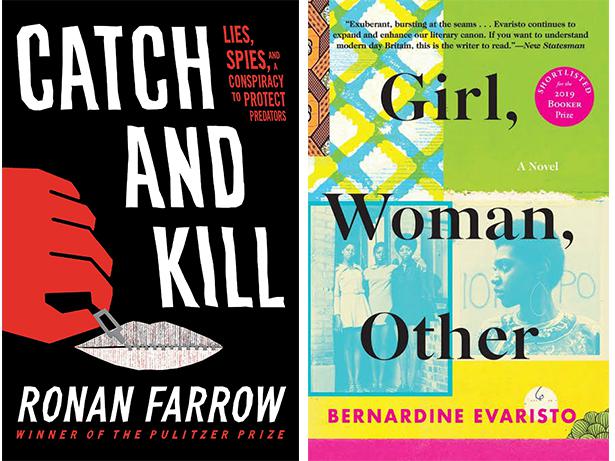 Trick Mirror: Reflections on Self-Delusion by Jia Tolentino
Fans of Jia Tolentino’s writing for the New Yorker, of which there are many, will be treated to her unique and assured voice in this book of nine original essays. Exploring the “cultural prisms that have shaped her”, Tolentino offers relevant and relateable commentary on familiar phenomena like social media and the internet, exercise culture and our incessant aims for “optimisation” and more.

The Testaments by Margaret Atwood
Written 35 years after its predecessor, the eagerly-awaited sequel to The Handmaid’s Tale picks up 15 years after the end of the first book, and with it Atwood promises to answer the questions that have intrigued readers since 1985. Told by three female narrators, including the dastardly Aunt Lydia, it’s a compulsively readable deep-dive back into the thrilling world so eerily like our own. Plus, the iconic author’s writing is always a joy. 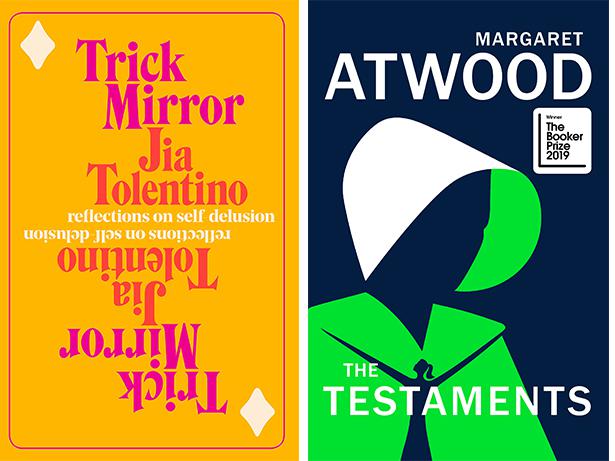 On Earth We’re Briefly Gorgeous by Ocean Vuong
The debut novel from award-winning poet Ocean Vuong, On Earth We’re Briefly Gorgeous draws on his family history to tell the coming-of-age story of Little Dog, the son of Vietnamese immigrant parents in America. A letter from a son to a mother who cannot read when he’s in his early twenties, the story chronicles a family’s history unearthed before he was born, and is a “brutally honest exploration of race, class and masculinity.”

Olive, Again by Elizabeth Strout
The follow-up to Pulitzer Prize-winning 2008 novel Olive Kitteridge, Olive, Again reunites readers with its complex and thoroughly human protagonist. Having been brilliantly portrayed by Frances McDormand in the screen adaptation of the first book, we meet Olive (again) as she struggles to come to terms with widowhood and understanding her peers in the town of Crosby, Maine. One for those after something deeper and more nuanced, Strout’s way of capturing multi-dimensional characters is superb.

From sourdough to pasta, Istanbul to Indonesia, these cuisine and location-spanning recipe books are the gifts that keep on giving

Meaningful gifts for the avid reader, the music lover, the art appreciator and the creative at heart