After making the best American film in years, the award-winning Chinese director is preparing for a completely different kind of Marvel

It took the combined might of Marvel and a global pandemic to bring Chloé Zhao to a halt. The 38-year-old Chinese director had spent her life in motion, relocating from Beijing to a Brighton boarding school at 14, then zigzagging across the United States in her 20s and 30s.

But the past 12 months have been different. Just before Covid struck, Zhao — pronounced “ja-oh” — was in the UK and the Canary Islands filming Eternals, one of the next linchpins of the Marvel blockbuster project.

Ever since, she’s barely moved beyond the home in rural California she shares with three chickens, two dogs and a cinematographer — her partner Joshua James Richards, who hails from Cornwall — and an editing suite on the otherwise deserted Disney campus an hour down the road.

Yet during this uncharacteristic standstill, Zhao’s reputation has gone on an epic voyage of its own — from rising star of world cinema to one of the most talked-about film-makers on the planet.

At last month’s Golden Globes, she became the second woman in the ceremony’s 78-year history to be named Best Director, a feat she is odds-on favourite to repeat at April’s Academy Awards. (She was also nominated by the Baftas earlier this week.) Meanwhile in China, she has been both feted by state media as a national treasure and the subject of a social-media hullabaloo after an eight-year-old interview was exhumed in which she’d made some mildly unpatriotic remarks. In other words: she’s hit the big time.

The motor for this ascent is Nomadland. Zhao’s third feature is one of the best American films in years — or perhaps that should be films about America, since so much of its brilliance stems from its watchful outsider’s perspective.

Spun out of a 2017 non-fiction book by Jessica Bruder about America’s growing army of middle-aged migrant workers, it centres on Fern — a widow (played by Frances McDormand) who criss-crosses the country in search of employment, and possibly also a renewed sense of identity and purpose.

Nomadland was shot over five months in 2018 in the wild expanses of midwestern and southwestern America; almost everyone on screen apart from McDormand is a real-world migrant, playing a scripted version of themselves.

Talking from home via Zoom, Zhao is warm, casual and gregarious, and spends the conversation sipping tea from a mug not much smaller than her head. We’re speaking just before the awards-season hubbub, at which point Nomadland’s one major honour was Venice Film Festival’s Golden Lion.

It was McDormand, the star of Fargo and Three Billboards Outside Ebbing, Missouri, who initially bought the rights to Bruder’s book with the producer Peter Spears — and who thought of Zhao to adapt it.

A few months earlier, she’d been wowed by Zhao’s second film, The Rider, a modern-day western about a Lakota Sioux cowboy coming to terms with a life-changing accident.

Both director and actress were taken with the way Bruder’s book “captured not just one person’s story, but a time in the United States where an entire generation’s way of life was changing”.

Nevertheless, a film would require a central character — so together, Zhao and McDormand came up with Fern, a former English teacher from a defunct Nevada mining town whose own life on the move would intersect with those of her real-world counterparts during the shoot.

It was also McDormand who made possible one of Nomadland’s most striking sequences, in which Fern finds seasonal work in an Amazon warehouse.

The actress emailed the company’s senior vice-president to ask if they could film inside one of its vast fulfilment centres, and they became the first independent crew to be granted permission to do so. 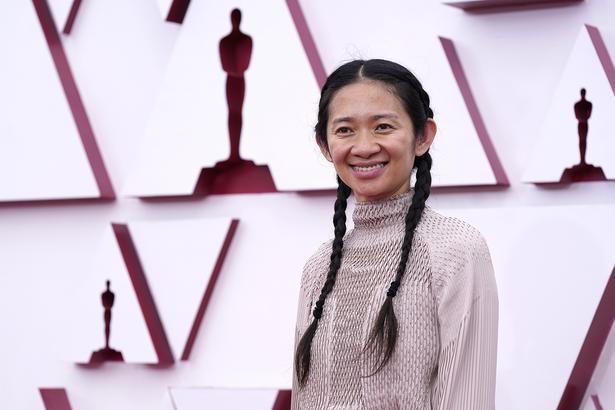 Some early viewers took umbrage at the apparent innocuousness of these scenes: Fern is seen contentedly working away on the packing line and chatting to fellow employees about their lot, while at one point she even describes the job to a friend as offering “great money”. “It would be very easy for me to have said ‘Amazon’s evil’,” Zhao explains.

“But while going after it could make me popular on Twitter, I’d rather look deeply at the structural issues that mean people Fern’s age have to work there — or shovelling beets in the frozen winter at night, which is far physically harder than working at Amazon. When you narrow it down to [Amazon], it’s only relevant to now. I wanted to look more timelessly at how older citizens are treated by a capitalist economy, how we see them as disposable unless they contribute. I’d far rather draw people in and plant a seed in their subconscious. To me, that’s the power of storytelling.”

READ: Rose Matafeo On Her New Film 'Baby Done' & Being Her Own Harshest Critic

All three of Zhao’s films to date have been shaped by the lives of her non-professional cast members, although this technique took a while to refine.

For her 2015 debut, Songs My Brothers Taught Me, filmed on the Pine Ridge Indian Reservation in South Dakota, “I naively thought that being spontaneous was the same thing as not planning. So I had this attitude that I should just go in there and see what happens, and I think the film suffered because of it”.

The Rider, also filmed at Pine Ridge, was far more tightly controlled. In fact, she’d wanted to make a film with its star, Brady Jandreau, ever since watching him train horses years before, but it was only when he suffered a traumatic fall at a rodeo in 2016 that the right plot emerged.

For Nomadland, she talked to travellers throughout the meandering shoot, and asked those with interesting stories if they’d like to be woven into the plot — paid, of course.

Some turned out to be naturals: one of the film’s biggest characters, Charlene Swankie, had played an 18th-century carpenter’s wife at a living history museum in Indiana, and was comfortable with the full 25-person crew.

But for those sharing deeply personal and sometimes painful experiences, Zhao used a more intimate set-up: just herself, Richards operating the camera, and an assistant.

One man, Bob Wells, the avuncular leader of a nomad community network, talks tenderly and frankly about the death of his son — a loss he revealed to Zhao only a few days before the scene was shot.

“I suggested that I could write that into his next scene, and though it took him a while to feel comfortable doing that, on the day he came to me and said ‘I think I’m ready’,” she recalls. “So I showed him the pages of script that I’d written for him, which were effectively his own words from the evening we’d spoken.”

Doesn’t this feel exploitative? “At the end of the day, these aren’t documentaries or even docu-dramas, but fictional films,” she says. “It’s not like we just show up and interview people, and they might say something they regret. Most of the time, I’ve known them for a while, and they trust me, and they’ve seen how we work. And at the end you show them the film, and ask them if they want to cut anything, or if they want to change their name, and I haven’t yet had anyone say they don’t like it.”

(In a recent interview, Wells described his role as “very, very healing… a gift to my son’s life and of my life to the movie”.)

Zhao herself had a comfortable upbringing: her father was an executive at a steel company and her mother a hospital worker (they divorced in her teens). But she sees the nomads — financially precarious and culturally unmoored — as kindred spirits.

“Wherever I’ve gone in life, I’ve always felt like an outsider,” she says. “So I’m naturally drawn towards other people who live on the periphery, or don’t live mainstream lifestyles.”

As a child in Beijing, she lost herself in Japanese comic books, known as manga. “It was my best friend,” she says, “and all I did until I was 14 years old.”

These became harder to obtain while boarding at Brighton College in the 1990s, but there was much local culture to absorb in its stead: Shakespeare and Oscar Wilde in the school library, and gigs by the Britpop band Suede after hours.

But she’s been able to indulge her childhood fondness for fantasy in Eternals, an all-star sci-fi epic with Angelina Jolie, Kit Harington, Richard Madden and Salma Hayek. (In fact, she’d been trying to get a foot in Marvel’s door for years when they invited her in 2018 to pitch for the gig.)

Unusually for a superhero project, it was largely filmed far from the green-screened confines of the studio — locations include Hampstead Heath and the Oxford University Museum of Natural History — with the same stabilised handheld camera setup used on Nomadland.

This is how she wants to work in future, she explains: “Like Alfonso Cuarón, or Ang Lee, shifting between allegorical, fantastical stories and small, intimate dramas, and applying the same techniques and technologies to each.”

To her, cinema still feels like a young medium — as unfixed as she was in her Brighton days, soaking up new influences in an unfamiliar halfway zone between where she was from and where she was headed.

“I was that perfect emo age, and it was a very creative time,” she laughs. “I fitted in on that grey beach very well.”