It’s not every day you get to fly halfway around the world to drive a car through the mountains of Norway. But so it is that I find myself on a private plane full of journalists heading across the North Sea to the remote city of Molde.

Five hundred kilometres north of Oslo, this fjord city is also known as the Town of Roses, but we’re not hear to smell the flowers, nor is there time to check out the Romsdal Museum’s modern new Krona building, which towers 22 metres into the sky, its jagged wooden roofline designed to reflect the surrounding mountains.

We’re here to put the new Range Rover Velar through its paces and a fleet of these streamlined SUVs are parked in an impressive lineup on the runway ready for us hit the road.

The Velar is a new offering from the team at Jaguar Range Rover, designed for those who want a vehicle bigger than the baby Evoque but not as large as the Range Rover Sport.

It is the perfect SUV for exploring Norway, the kingdom of fjords, where more than 18,000 bridges — impressive structures soaring elegantly into the landscape — provide a vital link to remote communities, while 900 tunnels, totalling almost 800km, are carved beneath mountains and below the seabed.

It makes for a fascinating drive and we speed through the breathtaking landscape. The road hugs the edges of the postcard-perfect fjords and rivers, cuts through pretty green low-lying fields, sprinkled with red and white wooden houses, and flirts with the foothills of soaring mountains and cliff faces. 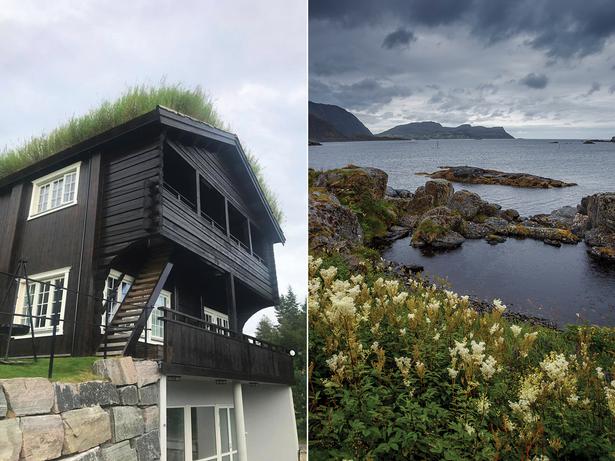 The morning flies by as quickly as the Velar and I only take my foot off the pedal when we turn down a country lane and crunch over the metal road to arrive at “Utsyn” a contemporary private home sitting proudly on the outskirts of a small hamlet of traditional holiday houses.

It is a welcome chance to stretch the legs, breathe in the fresh air, tuck into a lunch of Nordic salmon and salad, and watch waterskiers on the lake below us.

Appropriately, we are sitting in a minimalist house: the Velar’s design ethos is what the creative team call “reductionism”; the stripping away of complexity. The vehicle’s spacious interior has a sense of simplicity thanks to the use of premium materials and thought-through details.

READ: Every Wondered What it's Like to Be Behind the Wheel of a $4.4m Car?

Interestingly there is the option to have your Velar fitted in the newly developed fabric upholstery made out of recycled bottles. Outside, flush deployable door handles are impressively stylish and super-slim Matrix Laser-LED headlights add to the streamlined silhouette of the aluminium-intensive body structure.

This luxurious beast may be designed for better aerodynamics, quietness and fuel efficiency, but I’m just enjoying being behind the wheel and on the open road, exploring. Later in the afternoon, I am waved down and told to drive the car up and over a set of precariously placed climbing blocks, before pointing it up and around a curving ramp — so steep I would be afraid of rolling, if not for the Velar — then finally up, up, up a near-vertical wooden ramp before teetering and tipping over the top, clinging to the wheel as I go down the other side.

This is intense. Fortunately I have the car in All Terrain Progress Control, where once in a selected speed, the car will move itself forward.

The electronics do most of the work, distributing the power, and providing grip — I just have to focus on keeping the wheels in the right direction.

I just have time to get my breath back and grab a glimpse of the beautiful old homes reflected in the mirror-like lake, before I am told to swing off the main road and drive up what feels like an old river bed.

The Velar makes light work of climbing over giant rocks and stones, and grips the muddy hillside. Again we’re going up, up, up, before breaking through the bush and on to the manicured lawn of Storfjord — a luxury boutique hotel with views over surrounding forests, fjords and snow-capped mountains. Surely, this isn’t the usual way for guests to arrive?

Made of solid beams, the hotel’s most distinctive feature is its living grass rooftop — which I’ve spotted on many traditional and modern Norwegian homes along the way. The system works to create thermal insulation protecting effectively against the severe cold of winter, and the summer heat. A green roof will last up to 20 years without maintenance. And I love the aesthetics of the plants which help the buildings to nestle with ease into their natural vernacular.

By 10pm, it is still light outside and there is a warm red glow on the horizon. After a raucous dinner celebrating the best of local produce, the party vibe continues as a band plays inside the lodge, while outside we gather around an open fire.

The wine flows, as do conversations in accents from all around the world.

Topics jump from tales of the day (who scraped their car?) to psychoanalysis; the “black mirror” of social media and its impact on society; the pros and cons of moving to Norway and living off the grid; Aurora Aksnes — the electro-pop Norwegian singer described by W magazine as the mythical love child of Bjork and Grimes, and “one-to-watch” ethereal pop sensation Sigrid, signed to Island Records and whom The Guardian called “the new Lorde”.

The northern light is deceptive and it’s far later than I had planned when I stumble off to bed in the woody fragrance of my log cabin-esque room. 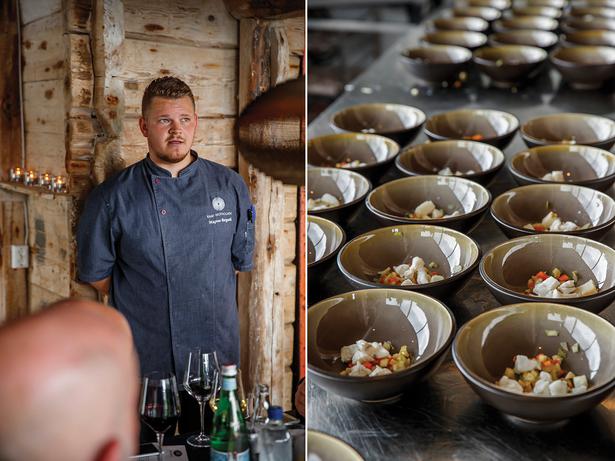 Head chef Magnus Bergseth at Kami, a seafood restaurant on the island of Skotholmen, and his signature dish of crab soup. Picture / Supplied

Norway was, of course, originally knownas a land of frozen hostility. For centuries it was cut off from the rest of Europe, its sparse population and harsh environment breeding ruthless survivors, warriors and Vikings. It inspired dramatic art.

Edgar Alan Poe wrote A Descent into the Maelstrom — a story of fear and terror felt from a high peak that over-looked the Norwegian cast, while Edward Munch’s The Scream shows a tortured soul, in a whirling cosmos, untethered in a hostile universe. Yet, as I lie in the luxurious softness of my bed, on a balmy summer’s night, that’s all too hard to imagine.

It’s not until the next day when we are speeding, not in cars but in boats, across a swell off the Norwegian Sea, under forbidding cliff-faces which soar up into dramatic dark clouds where gannets swirl, that I get a sense of the toughness and endurance that has shaped this land and its people.

READ: Why Queenstown is a City of Extremes

I can imagine the Viking ships — so cleverly designed to travel oceans — heading out to sea, sparking awe in those who saw them. Sculptural, with an elemental beauty, the ships’ design was innovative for the times.

Now it is Norway’s modern maritime industry that is burgeoning. Thanks to vast supplies of oil in its seas, it is one of the richest countries in the world (hence the incredible roads we’ve travelled) and its offshore industry is a groundbreaker for new technologies, as are its fleets of fishing ships that sail out in wild waters for weeks at a time.

Here lies another synergy for the Range Rover Velar, its own innovations and sophisticated advances making it just as home on urban streets as it is getting down and dirty in the country. Flying by helicopter along the Norwegian coast and wild flowers on the island of Skotholmen. Picture / Supplied

As our speedboats blast past remote islands sprinkled with houses, and the occasional lighthouse, we are told tales of sunken treasure from centuries ago and hear about the world’s first floating wind farm — with turbines developed in Norway — that this year were towed across the North Sea and moored off northeast Scotland.

These will use the ocean to generate renewable power.

We are truly out in the elements and it’s exhilarating. This is the ultimate way to end a trip celebrating a car designed for those who don’t want to follow an obvious path.

But first there is lunch at Kami, a seafood restaurant on the island of Skotholmen, seemingly in the middle of nowhere, in a shed once used to salt herrings and where, during World War II, salt basins were used to hide guns. Today it is a hip restaurant, accessible only by boat during summer.

READ: Why Michael Meredith is Closing His Much-Loved Restaurant

From here the adventure takes one last turn — skywards — as we are whisked by helicopter back along the coast, into a strong onshore wind, to the airport, where our flight back to England and a slightly more sedentary pace of life awaits.

• Amanda Linnell was a guest of Jaguar Range Rover in Norway. The Range Rover Velar is now available in New Zealand. To find out more, visit landrover.co.nz

What is 'Lagom' and Why Should You Care?

Goodbye hygge, hello lagom. The Swedish art of ‘not too much, not too little’ is the Scandi lifestyle to embrace this year