A Photographic Getaway to the South Island I had to get away. Escaping two children who are trying to damage one another from dawn ‘til dusk could be therapeutic. I longed to leave behind all the undie-folding and sock-matching. For the next week, it was just me, a bunch of other photography buffs, the South Island landscape, and a quiet room overlooking Mt. Aoraki. Let’s hope Picasso was right when he said, “Art washes from the soul the dust of everyday life,” because I had some soul grease to get rid of.

Enter Jackie Ranken, 54 and Mike Langford, 64, a couple who make a living from their epic landscape and nature photography and have been working as professional photographers for more than 35 years. They are the only Canon Masters in New Zealand — meaning they have been invited by Canon to work as ambassadors. Of course they are also brilliant photographers, with their fair share of accolades and national awards.

The pair run courses all year round; locally in Otago, Milford and Aoraki-Mt Cook and internationally in exotic locations like Myanmar and Japan.

This week we’re road-tripping to Aoraki-Mt Cook, New Zealand’s highest peak, and we’ll be stopping, often to photograph the landscape. This is not a trip my family would enjoy. It begins in Queenstown, where our motley crew meets. Seven men and women, ranging in age from their 40s-60s, similar only in their love of photography.

Paul and John are two determined doctors from Auckland; Yogi, a dentist from Warkworth with a taste for whiskey; Fiona, an Aussie from the Blue Mountains; Toni a businesswoman from St Heliers and Fenella, a Queenstown local. Then there’s a journalist from Auckland with no waterproof hiking shoes, no backpack, no long lens, no wide lens, no children and a cough — that’s me. I wake up at the crack of dawn ready for day one. I’m not a mother or a wife today. I don’t know who this person is, but I like her. There’s no yelling, or crying. I can hear the breeze whistle through the trees. I meet Jackie and the rest of the girls at Arrow Junction; the boys travel with Mike. There’s a hint of a competitive air between the sexes. Who will stop where, who will shoot what, who will use which lens? Jackie and Mike communicate via walkie-talkie; now that’s something I could try at home with the kids.

We speed through the gorge to our first stop, Lake Dunstan. The girls are mesmerised by this misty morning scene. “Ethereal,” says Jackie to Mike. “I think we’ll head on,” he replies.

There isn’t a ripple of wind. We’re shooting into light, which makes exposure tricky. Jackie passes me some noteworthy advice: Photographing light coming through the low lying fog can be difficult, as the camera finds it hard to focus. Try manual focus or find an object in the foreground to auto or manually focus on.

We find the boys shooting reflections a few miles down the road — always a success according to Mike, as the eye likes harmony and repeated elements. Today Lake Dunstan is a giant mirror, providing so many repetitions it’s hard to know where to start. Cropping in on a few graphic elements of the landscape is the solution rather than looking at panoramas, which become confusing to the eye.

We drive on through the winding, ochre-hued Lindis Pass. The simple, rolling landscape lends itself to experimentation with double exposures. Most digital SLR (single lens reflex) cameras have an inbuilt function whereby you can shoot one scene and layer it over another.

This feature gives an instant arty feel and there’s an element of magic to the end result — that is, you’re not entirely sure how it will turn out, which appeals to me as I’m a terrible planner. I shoot rolling hills, then overlay these with cars and roads behind me. I get the shot I never knew I was after, a campervan seemingly driving up and over to nowhere through the mountains. Through the pass, we come across an overly perfect scene of winter willows in bright yellow splendour against blue skies. It’s so beautiful, it’s cliche. Mike advises switching our cameras to black and white mode should we ever feel the hint of “seen this before in a travel brochure”.

Back on the road, we speed by fields of brown, the white road lines are coming fast and we’re encircled by white-dusted peaks. Finally, we see the behemoth of a mountain that is Aoraki-Mt Cook. I’d never seen this monster before. Close-up it was icy and scary and it was even better-looking from my cosy room at the Hermitage Hotel.

I took a shot of the summit from my deck at 10 pm after too many whiskeys. Why on Earth did people want to climb such peaks, I wondered. The Sir Edmund Hillary exhibit on level one of the hotel did little to convince me it was a sensible pastime.

Earlier that evening we’d been summoned to the trucks and informed we would be night shooting —photographing stars, tramping huts and the moon. Everyone else had remembered to bring a torch. I had to make do with my huge iPhone 6, clamped into my jaws while I set up my tripod.

The key to this night-time malarkey was very slow shutter speeds and waiting. A revelation of the night shoot is the concept of painting light into areas you want highlighted in the shot. Mike found a Portaloo he liked the look of. So we photographed this dunny and had turns at waving the torch around to create patterns with light. With long exposure, the camera will only pick up the light, not the mad person waving the torch about. Voila, a picture of a dunny with wings.

Up at the crack of dawn again for sunrise, we arrive at the black stilt breeding ground on a silty tributary to Lake Pukaki. It’s below zero and I predictably step in a large icy puddle. I end up with my damp sock glued to the heater in the car. 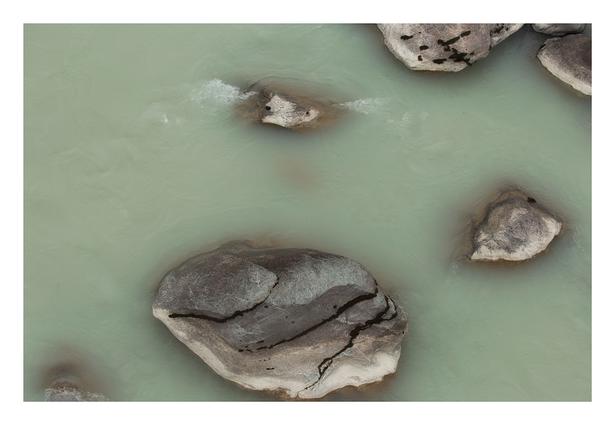 The others make the most of the sunrise; I’m not overly bothered, so much gaudy pink in the sky, it’s like a Hero Parade out there. I warm up and brave the cold again — and switch to black and white. There’s Aoraki-Mt Cook, dressed in a white cape, clouds sliding over its face. The birds are chatting loudly over breakfast, dipping their beaks into the icy water, with no fear of us and our frozen toes.

Critiques are a large component of learning on this course and instead of a mid-morning nap, which I’d been dreaming of, we convene to stack up the past few days’ work. Everyone has a different take on the same material. Jackie later explains: “You can have all the camera knowledge, but what’s really important is your artistic vision.” I’d run off on the multiple exposure gauntlet while others had remained more faithful to the traditional landscape. There’s no right or wrong, it’s all a matter of taste.

No time for lunch, we’re back at it, hiking up to the Tasman Glacier Terminal Lake. We feel like ants marching across the Earth, insignificant in this vast scheme. We reach the lake and it’s littered with icebergs of all shapes and sizes, the water is milky blue and the ice twinkles in the late afternoon sun. We try all angles, lying on the rocks at lake level, switching to wide angle lenses, creating props from icebergs to shoot through. It’s magical, but after a while even icebergs get tiresome. “Unless they’re in a drink,” Yogi jokes.

Our final day shooting around Aoraki-Mt Cook involves a hike that takes us closer to the base of the mountain, but today the winds are gusting and cloud obscures its face. We’d all planned dramatic shots of avalanches, which happen periodically thoughout the day. Instead we’d have to capture the aquamarine river, the swing bridge, or the happy people passing on the trail.

Come to think of it, we had little time to dwell on anything other than all the beauty we were privileged to capture with our minds and cameras. Perhaps the real thrill of this artistic escape was that we saw nothing but what was in front of us — and that was refreshing for the soul. • When you get to a scene ask yourself: what is your subject? Then use exposure, cropping and aperture to identify that.
• Shoot a figure in the landscape, it adds an interesting element and a new shape.
• Try not to over-process your photos in editing software, once you notice the processing element, you are taking away from the subject matter.
• Try the live view function in your SLR camera. It’s a good way to pre-visualise the shot before capture.
• Avoid merges where two or more shapes come together, and distracting highlights on the edge of
the frame.
• Create leading lines coming in from the corners of the frame that take your eye into the photo
• Less is more, crop in to create fewer confusing shapes.

Whether you’re new to backpacking or a seasoned globetrotter, you shouldn’t put away your passport just because you've started ...

Behind the Scenes of Our Queenstown Shoot