Auckland Art Fair: Bold Photography Showcases To Look Out For

Three female photographers will appear at this year’s Art Fair, all with work that questions history and ponders the future

They’re posing for Australian art photographer of the moment Tamara Dean, who is readying her digital Hasselblad camera for the shot titled ‘Shoaling’ when a passer-by, clearly a local who knows the river, warns Tamara, “You do know this is a breeding ground for bull sharks? You have to get everyone out of that water.”

In an instant, Tamara is urging her models to exit the river. It’s all in a day’s work for the intrepid photographer, who likes to entwine her human subjects with the forces and forms of nature, telling stories of the fragility of humanity and the world we occupy.

READ: Where To Find: Auckland's Best Art Galleries To Browse

The 41-year-old, multi-award-winning artist has works in collections all over the world, and this year one of her large-scale works from her recent 2018 series, In Our Nature, is on show at Auckland’s Art Fair with Sydney’s Martin Browne Contemporary. The series that includes 21 images “is a symbolic reminder that we are neither separate nor superior to nature and that to wreak destruction upon nature leads to our own downfall”, she explains from her home just a few hours from Sydney.

These epic, large-format photos that give the viewer a sense of physically being there were shot in the bushland and ponds of the Adelaide Mount Lofty Botanic Gardens. The imagery reflects the four seasons and draws parallels to the human ageing process. 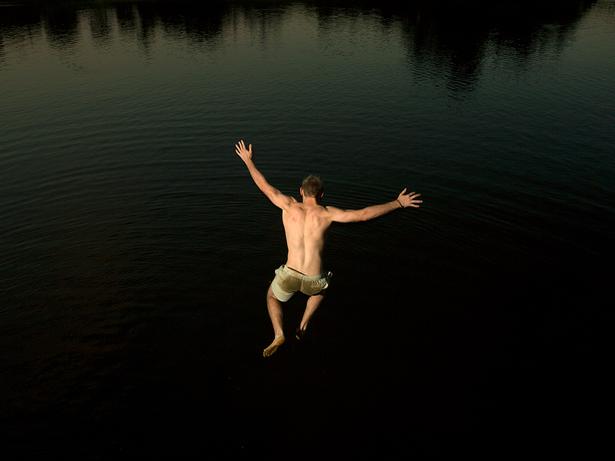 ‘Beyond the Brink of Fear’ by Tamara Dean. Picture / Supplied

In one scene, a group of children are on their knees in a field of daisies, shielding their eyes with their hands and looking up towards the sun, they appear to be mimicking a plant in early growth, fighting for the light. In another shot, pink-haired teenage girls are entangled in a lotus pond, they — like the budding lotus — are on the cusp of bursting into full bloom.

This series was challenging to execute. “I’d flown to Adelaide to do a recce and three days later when I returned, the lotus flowers were gone,” she explains. “It was another year before I could shoot again.”

Even when she turned up the following year, nature had the upper hand.

READ: Where to Find: The Best Bookshops in Auckland

Her goal was to capture the scene around dusk, the golden hour before the sun drops, when colours glow with warmth. But the flowers had other ideas. They were closing up shop at 4.30pm, forcing Tamara to execute the scene within 30 minutes — quite a feat when you are directing a group of models in the water, all on your own.

There are many elements that come together to make a commanding image she says; the concept, the location and the models. Her call-outs on social media were mostly successful, even without offers for payment.

One call-out read, “Call out! Seeking Adelaide people aged 80+ to model for new series.” And in the finer print, “models must be comfortable posing nude”. Tamara says her models’ interpretations of the concept really added to the work.

“At one stage, the two, well, more elderly models just spontaneously started dancing around this tree,” she laughs. With so many frames from each scene to choose from, Tamara often had a difficult time selecting the final image.

“I avoid using faces, so not to personalise the images too much, so when you look at the scene, it could be anyone in the picture.” Tamara spent a large portion of her early career as a staff photographer with the Sydney Morning Herald, but was unsatisfied with the broad demands of the job. “There was never the opportunity to perfect any aspect of your craft,” she recalls. Although the people skills and directional skills she learned on the job have been helpful to her art career.

Now based on acreage a few hours out of Sydney with her small family, she is more at one with nature, which is the very essence of her work. “For as long as I can remember, I have yearned to be in nature. When I enter a forest, I feel like I have come home.” 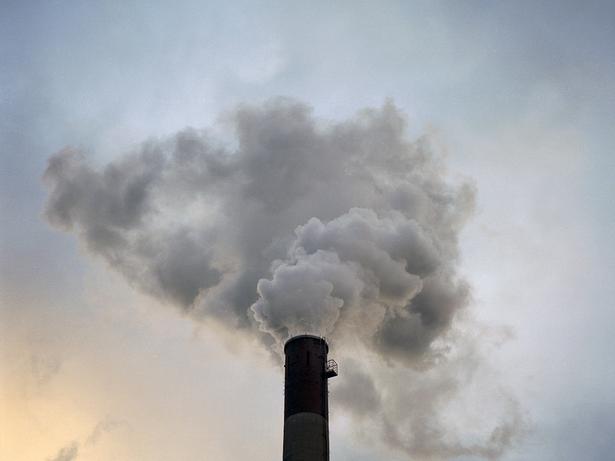 Berlin-based photographer Conor Clarke yearned for something different. To be a painter. But she fell under photography’s spell in her first year at Elam. Her large scale, hand-printed work, shot on film as opposed to digitally, also considers nature, specifically water and epic landscapes; how humans interact with places, and what we consider beautiful.

The concept that a place is so picturesque that you have to go see it for yourself intrigues her. “You know what the Eiffel Tower looks like, but you go there anyway, then you take a selfie, then you have your proof of experience.”

Thirty-six-year-old Conor attempts to turn this picturesque landscape notion on its head by photographing a scene that might not be classically considered beautiful but really, when you consider its form, colour and light, it has all the qualities of beauty.

Consider her steaming water tower pictures, from the In Pursuit of the Object, at a Proper Distance series, one of which is on view at the Fair, photographed on a trip around Germany. These towers, which are in fact water-cooling turrets, might turn New Zealanders off, she suggests, as they could associate them with industry or pollution, but for the locals living among these structures, they are symbolic of home.

She adds, “the puffs are in fact steam, not pollutants”. And Conor captured them at their best, at sunrise and dusk, with the sun hitting the steam, making the puffs appear like otherworldly clouds. Conor graduated from Elam School of Fine Arts, University of Auckland, in 2005, but has been living in Berlin for the past nine years. “I think many of us at art school romanticised about living in Berlin, not that we knew much about it.” 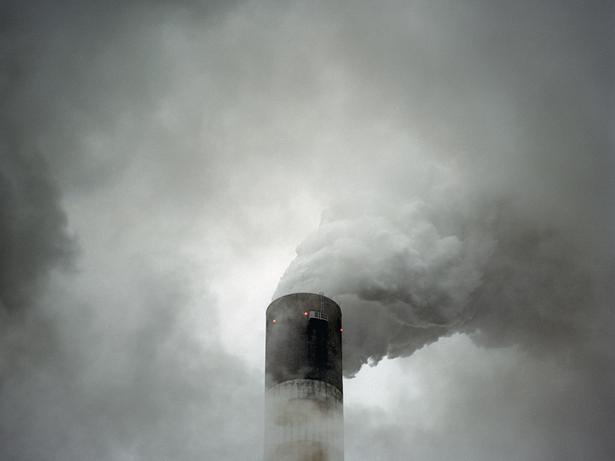 She says it suits her, it’s the centre of Europe, has a bubbling art scene and it’s not super expensive to live in the inner city. However, most of her work is still shown in New Zealand, through Two Rooms Gallery. She has been the recipient of numerous art awards including the 2007 Metro Canon Young Photographers Award and the prestigious international Renaissance Photography Prize in 2015, and in 2017 she was awarded the five-month Tylee Cottage residency in Wanganui, where her brief was to explore the waterways of the Whanganui River.

This body of work took its own watery turn. She ended up looking at the concepts of colonial imposition, the use of water as a natural resource, and the consumption of the landscape by humans. Landscape sites in transition also intrigue her and one of these works in the Scenic Potential series is at the Fair. It’s a striking black and white print that, at first, looks to be an epic mountain face but is, in fact, a pile of rocks on a construction site in Berlin.

Her water project was completed in Berlin and the show, titled Ground Water Mirror, is set to open at Two Rooms Gallery in June. The overarching theme, says Conor, is the self-reflective qualities of water, not just literally in the landscape, but also within ourselves.

Conor, too, seems reflective about the process of photography. “Photography is never entirely true. It’s a partial truth.” And that’s the idea she grapples with so well.

Ann Shelton, like Tamara Dean, is also an ex-press photographer. Ann is now one of New Zealand’s most prominent art photographers. Her heavily researched photographs disclose histories of cloaked truths, even though on the surface they seem pretty as a picture.

Take her most current body of work, which appears at the Two Rooms Gallery stand, a series of striking floral arrangements against moody-coloured backdrops in the Ikebana style of floristry. This highly refined and contrived style of floral arrangement sees plants “pared back and manipulated”, she explains. But what could a few stems in a vase possibly conjure up in terms of dark secrets?

“I wanted to make a body of work that looked at environmental issues and early settler life,” she says. So, instead of pretty blooms, the vases showcase plant species introduced to New Zealand by colonial settlers. In the work titled ‘The Banshee, Golden Wattle (Acacia pycnantha) 2017’ she uses the black wattle plant. With its merry, little yellow flowers, it might look sweet, but this invasive plant was brought to New Zealand by settlers for use in the tanning industry — the bark was dried and crushed and sold for hide tanning.

Soon after introduction, the trees were attacked by a fungus and they become useless. Little did the settlers know, the tree’s seeds can sit dormant in the earth for up to 50 years, and the tree germinates following any soil disturbance. Thus the tree has since become an invasive species. “The tree’s long-term use value backfired,” says Ann.

The same could be said about the pine in the work ‘The Dowager, Pine (Pinus radiata) 2017’. It begs the question friend or foe? If you’ve visited the Marlborough Sounds recently you’ll see dead pines everywhere. Conservationists are killing them to make way for native trees, which have been marginalised by the pine. 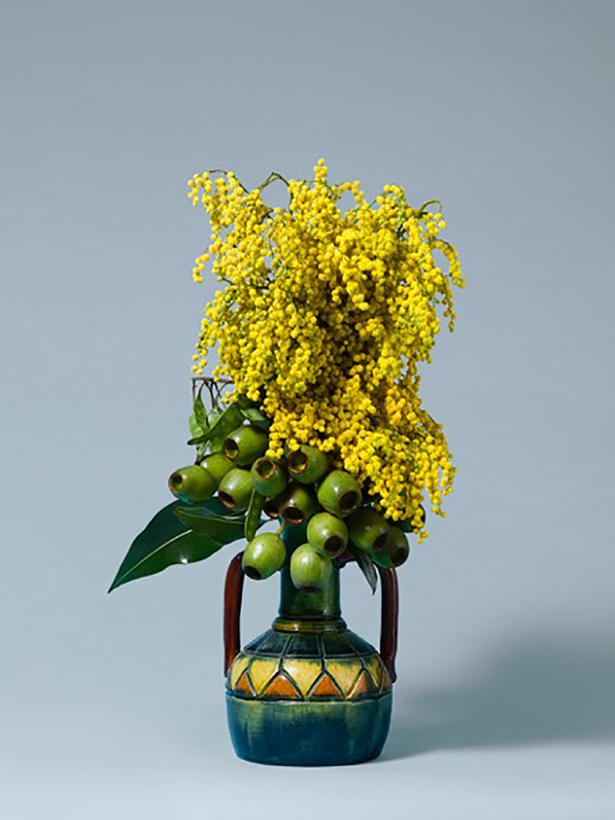 Ann’s foliage is beautifully arranged in hand-selected pots, all sourced by the artist on TradeMe. Striking in their own right, they reference the arts and crafts movement, which was essentially an anti-industrialist movement, she explains and provides another layer of irony to the works.

Some pots are from Germany, some Alienware and some are Amphora ceramics from Bohemia — an area now part of Austria and Czechoslovakia that produced fine Amphora art pottery from 1892 until the 1940s.

Working from her living room with her selection of textural pots and plants, Ann sets about creating backdrops, deciding on lighting and playing with arrangement choices. The resulting hyperreal, large-scale images are trademark Ann Shelton. Their intense surface quality is the result of high pixel quality, achieved with her top-of-the-line Nikon digital camera and her printing process.

“For this series, I discovered digital prints were better at reading subtleties of colour than analogue (film). I have to produce a work that’s going to stand out from all the digital imagery we are flooded with,” she reflects, “you couldn’t shoot these on an iPhone.” On top of her technical prowess, her meticulous research into the social, political and historical landscape of her chosen subject delivers images that not only stop you in your tracks, but make you think while you’re there.

Her major survey exhibition titled Dark Matter is now on show at Christchurch Art Gallery after a successful stint in Auckland and Wellington. She’s blown away by how many people there have already seen the show, “57,000!” she says in disbelief. When asked if this type of exposure and recognition makes it all worthwhile, the associate professor of photography at Massey University in Wellington doesn’t pause to reply,

“I try not to get obsessed with success or my next career move. I just keep making the work.”