Where to Stay: Pier One Sydney Harbour, Sydney The Gantry Bar at the Pier One Sydney Harbour hotel. Picture / Supplied

On a cloudless winter’s day on Sydney’s busy waterfront, I navigated my way through masses of tourists after the perfect selfie and a couple of extravagant wedding parties having their official pictures taken against the glorious harbour backdrop, before encountering the best photoshoot of them all. Rather than blushing brides, however, this one — in the lobby of the Pier One Sydney Harbour hotel — featured a host of excited models with four legs and some rather fetching collars. Dogue, a luxury canine fashion and boarding company which outfits this dog-friendly hotel with accessories in select rooms, was in the house, and it had brought its finest talent out to play.

This beautifully renovated heritage shipping building in The Rocks is part of the Marriott Hotel group’s boutique Autograph Collection, and its stylish, contemporary decor, excellent dining options and unique location right next to the struts of the city’s iconic harbour bridge, make it one of the most desirable addresses in town.

There’s no forgetting that you’re in a historic building — the renovation has been careful to retain character aspects of the original space, including exposed wooden beams and original steel framing and the floors emit a pleasing creak when you’re walking along its long hallways.

Guests are greeted at its discreet entrance with a glass of sparkling wine and chocolate-covered strawberries as they check in to one of the 189 rooms, which include mine for the weekend, a Harbour View corner balcony suite on the second floor offering uninterrupted views of the jewel in Sydney’s crown.

From its deck I sat back and watched the steady stream of traffic crossing above, below and in front. From above came the clickety clack of trains crossing the bridge alongside the constant flow of cars, while below tourist after tourist stopped by to enjoy the views of the Opera House, Luna Park, and Cockatoo Island. On the glistening harbour itself were sail and speed boats, ferries and tourist cruises, as well as an enormous cruise ship berthed at nearby Circular Quay. The odd helicopter zoomed overhead, probably heading for the naval base at Garden Island but possibly TV network choppers or even rescue aircraft en route to the hospital. 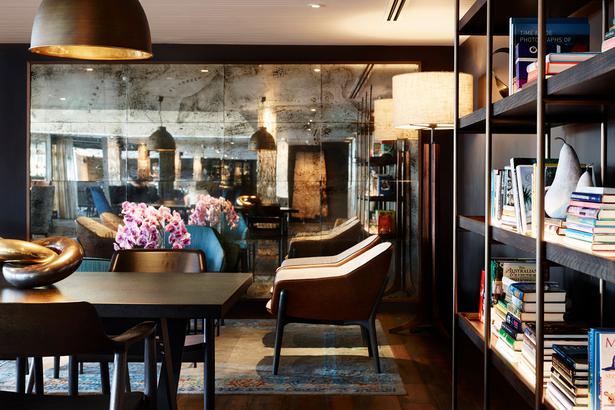 So much action outside, but plenty to do within the luxurious suite too, from the two television sets (one enormous, the other hidden at the foot of the bed, raised from its hidey hole with the flick of a switch); the standalone bathtub in the newly renovated gorgeous bathroom (with a choice of either Appelles Himalayan bath salts or bath caviar to soak in) or the walk-in rain shower with heads and body jets at either end; and an extensive minibar with premixed cocktails including old fashioned Negronis. Other features include a walk-in dressing room, Nespresso coffee machine, smartphone-ready sound system, chaise longue, electric blinds and Dyson appliances, including its new hairdryer.

There’s plenty going on downstairs too, with a couple of excellent food options to choose from, as well as a zinc-clad central bar area to hang out at in the buzzing lobby.

The Gantry, which received a hat in the 2017 Good Food Guide Awards, is helmed by executive chef Joel Bickford (ex Biota Dining) and a destination restaurant in its own right. Serving up contemporary Australian cuisine in sophisticated surrounds, the menu offers a seven-course degustation menu and a pre-theatre option so guests can dine and dash to a show at the nearby Roslyn Packer Theatre or Sydney Theatre Company’s The Wharf theatres. One of the specialties is the grated comte, served during our visit with roasted cauliflower, torched onions, salted egg and shaved truffle. It was sensational, as was the john dory with sour peppers, green garlic and almond. 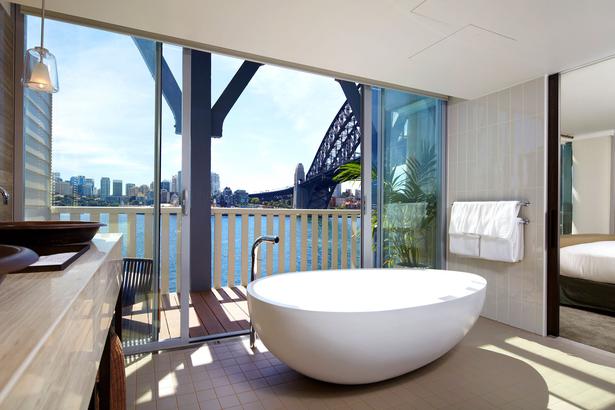 A popular spot for wedding ceremonies, the public boardwalk that flanks the hotel really comes alive at night with fairy lights and diners making the most of The Kerrigan, a new “smokehouse shack” food cart overlooking Walsh Bay. This gem serves a host of 14-hour smoked meat delights including lamb racks and chook wings, as well as fresh seafood, including juicy prawns served on bed of ice with delicious aioli.

Over the winter months, a series of igloo-like domes have popped up, outfitted with cosy throws, beanbags and slippers — and one even has a gas fireplace. These domes, a partnership with G.H Mumm Champagne and St. Hugo Wines, can be booked or, if no one is in them, guests or passers-by can pull up a pew and order a drink or some food from the special menu of drinks, cheese pairings and winter warmers such as farro, chicken, and winter vegetable broth or lamb shank pie.

Sydney’s CBD and waterfront are on your doorstep — Pitt St Mall is a 20-minute walk, as are King St Wharf and new development Barangaroo, which offers shopping (including a David Jones store), dining and a headland park. The opera house and botanic gardens are also 20 minutes on foot; if you’re wanting to go further afield, the Circular Quay public transport hub is just 15 minutes away.

• Shandelle Battersby was a guest of Pier One Sydney Harbour. Visit Pieronesydneyharbour.com.au