Jonathan Van Ness is the grooming guru of the show. Photo / Netflix Picture him tossing his gleaming, down-to-his-clavicle hair and strutting into your living room armed with all the styling necessities - dental floss, products for zuzsh-ing your curls - and fussing over everything about you that is already gorgeous, gorgeous, GOR-GEOUS, but also just, like, a little basic and a tiny bit sad. But by the time he's done with you, honey, you will be fierce, you will be owning it, you will leave Van Ness no choice but to ask: Who gave you permission to be this cute?

Van Ness, 31, is a breakout star on a breakout show, the grooming czar and one-man meme-machine of Queer Eye, whose second season is now available on Netflix. For the streaming giant's first foray into unscripted television, five gay men were dispatched to the wilds of Georgia to preach the gospel of hygiene, fashion and confidence to men who live in one of the most conservative states in the country. (Season 2 expanded its reach, with episodes featuring a woman and a transgender man.) When it premiered in February, Queer Eye quickly became must-see streaming, a heartwarming hour that made even cynics sob; the poster for Season 2 put pictures of the guys on a box of tissues with the ad copy, "I'm not crying, you're crying."

What first intrigued Van Ness about the new Queer Eye was its tagline: "Turning red states pink, one makeover at a time." Although many progressives saw the 2016 election results as a sign to retreat into whatever coastal bubble couldn't be popped by people who put Donald Trump in the White House, the idea of a televised charmed offensive appealed to Van Ness, who grew up in rural Quincy, Illinois, just across the Mississippi River from Mark Twain's hometown.

"Truly in the middle of the country," Van Ness said by phone.

Van Ness was already adored in some corners of the internet for his Emmy Award-nominated Web series, Gay of Thrones, and his podcast, Getting Curious. Queer Eye seemed like "an interesting vehicle for me to do something I love to do, which is doing hair and entertaining people," he said. And without commercials wasting real estate, Van Ness thought there would be space to make "something that could be soulful."

Technically Queer Eye is a reboot of Queer Eye For The Straight Guy, which premiered on Bravo in 2003, brought the word metrosexual into the lexicon and went off the air four years later. But really, it's a reboot of Cinderella. There's no put-upon heroine, but there are civilians who have let themselves go.

There's no fairy godmother, but instead the Fab Five: Bobby redecorates entire homes; Karamo, the culture expert, basically just reminds each week's subject that, "Hey, you've got this." Tan, the style guide, sweet-talks skittish men into embracing pops of colour and patterned shirts. Antoni oversees food and wine, but his Season 1 lessons were so rudimentary (he mostly caressed avocados) that internet conspiracy theorists suspected he didn't even know how to cook. (He's so handsome, who cares? Leave Antoni alone!)

And then there's Van Ness, the quippiest, peppiest of the bunch. He is there to see underlying beauty and excavate it, to evangelise for self-care and to shake everybody out of rigid gender roles that keep us from loving and expressing ourselves as wholeheartedly as he does. "To me, self-care isn't really shallow," he said. "Showing up for yourself, putting on a little moisturiser, can inspire so many different parts of your life." 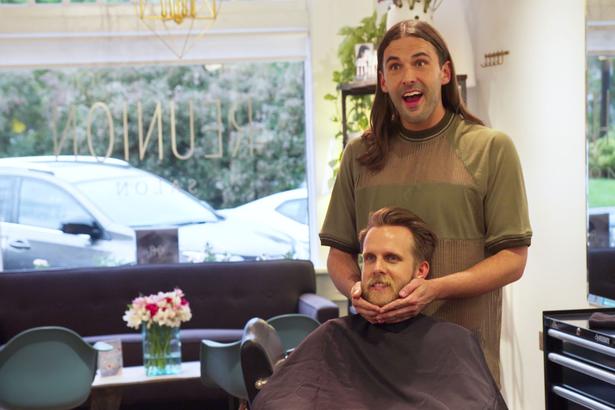 The show champions the idea that a good haircut and properly fitting pants can change your life. Photo / Netflix

Van Ness finds inspiration from his adolescence, in which he faced constant rejection for not meeting society's standards of what a boy should be.

Now, Van Ness is on a mission to enlighten men who have internalised the idea that cutting your toenails or applying sunscreen makes you feminine, and that there's something wrong with being feminine, an idea he will disprove while wearing French braids and see-through lace tops.

"I wish I had more of a game plan of how I'm going to, like, take down toxic masculinity," he said. "But I think that game plan is just going to reveal itself if we keep going. I think I need to keep plugging along, and it'll happen."

John Paul Brammer, a writer and cultural critic for them., an LGBTQ website at Conde Nast, said that Van Ness is the beating heart of Queer Eye and that his fan-favourite status reminds him of the reception Adam Rippon received at the 2018 Olympics.

"We really haven't seen a whole lot of openly gay, flamboyant people get so much, not just acceptance, but outright adoration," Brammer said. "Straight people do love caricatures (and) the idea of the sassy gay. ... And that can be a very one-dimensional reading of what gay people are. But I do think Jonathan sort of turns that on its head for me. When I see him on the show, and I see just how willing and daring he is to be so outright, openly gay with these straight people. There's something kind of radical about the way he prances around in there."

On top of the standard delights of renovation television, Queer Eye offers an irresistible fantasy: that if everyone in America could spend a week with these guys, acceptance would be the law of the land. Hate, burning bright as a tiki torch out in the real world, all but evaporates under the heat of Van Ness's blow drier. His catch phrase is the crux of the show: Can you believe?

Can you believe that a fantastic haircut and properly fitting pants will change your life? Or, a higher-stakes proposition: Can you believe in the possibility of connecting with other people, no matter what their politics, even now? Can you believe that Van Ness — who, as the first male cheerleader at his high school in Quincy had homophobic slurs spray-painted on his car — can see something gorgeous in the proud owner of a Make America Great Again hat?

That's the tension at the core of Queer Eye.

"It's the big moral crisis at the center of the time we find ourselves in," Brammer said. He notes liberals' initial post-election desire to get to know Republicans, a feeling that, within months of Trump's inauguration, was replaced by a complete refusal to engage.

READ: Inside The Wardrobe Of The Collection, TV's New Best-Dressed Series

"Queer Eye lands in this more centrist space," Brammer said. "We just love everyone; we just want to get to know each other. And I think there's wisdom to it. There have always been queer people whose role that is, and it's a necessary one."

Even though Brammer thinks Queer Eye offers an unrealistic representation of what needs to happen to make queer people more fully accepted, he still adores the show. "It works on me. All of its manipulations of my emotions work perfectly."

For what it's worth, Van Ness believes. And beneath his bubbly surface, there's a simmering urgency: We have to believe. Because what happens if we don't?

Take Tom, from the series premiere, a conservative, middle-aged white man whose beverage of choice is a tequila and Mountain Dew cocktail he calls a "redneck margarita."

"I do not want to know his political beliefs," Van Ness said. "Because we're not going to see eye-to-eye, and that's not the point."

"It's more about human connection than it is about politics," he said. "We don't all have to agree on everything. ... Sometimes it's just about trying to connect on what you can connect on, because the human existence and experience is all about connection."

Van Ness has certainly experienced a connection with his legion of new fans. This month, he found himself on a float at the Los Angeles Pride Parade.

"I felt like Meghan Markle, like, on this float. Literally," Van Ness said. "People were crying. When people would realise that it was me, people were literally rushing the float, freaking out. I was clutching my pearls and just like, waving and blowing kisses."