THE PROPOSAL
Zoe: We’d been together for nine years, and had talked about getting married numerous times. It came up again when we were having fish and chips and wine on Kohimarama Beach. We just talked about it, and we were engaged! It was low-key — no bended knee, thank God — and perfectly us. There wasn’t a ring, although Dan had actually been to design one and had been waiting for it to be finished. I’d had my suspicions because the ring I always wear went missing; magically “found” by Dan “in the sofa” a few weeks later, after he’d borrowed it for sizing.

THE VISION
Zoe: We wanted a day that felt both traditional and relaxed. We loved the feeling of simple and sweet chapel weddings from the 50s and 60s, where it was all a little imperfect but you can tell from the photos that it is the most joyous occasion. But mostly, we wanted our friends and family to feel comfortable, and for our guests to have the most fun they had had in a while. 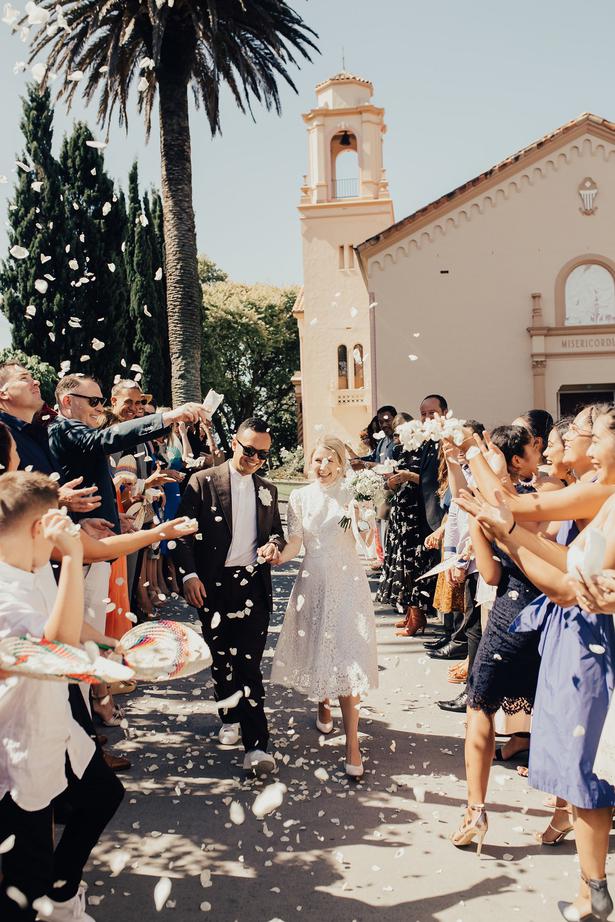 CULTURAL ELEMENTS
Zoe: It was very important to have elements of Dan’s Samoan culture throughout the day: his sister Simorina did a beautiful reading in Samoan, and at the chapel we had some traditional fine mats from Dan’s grandmother Taualofa, family heirlooms that signify tradition and family. There was also a traditional Siva or Samoan dance at the reception, which symbolises the family coming together as one.

Neither of us were huge fans of readings, which can be so corny, but we ended up having two: my nephew Tyler read Nick Cave’s Into My Arms (“I don’t believe in an interventionist God but I know darling that you do”), and Dan’s cousin Lofa and sister Simorina chose to read 1 Corinthians 13:4 - 8 in English and Samoan. We asked our nanas to be our witnesses and sign the marriage certificate. 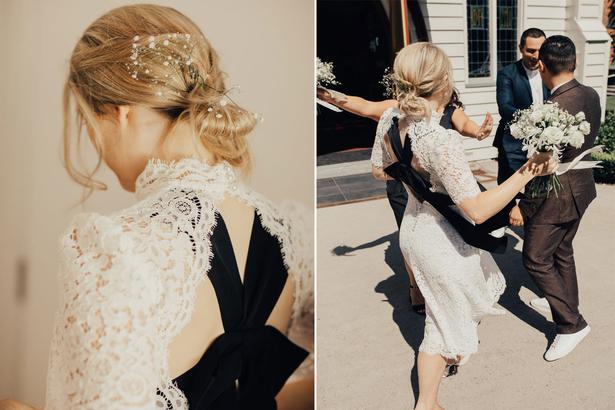 THE CHURCH
Zoe: Our ceremony was at St Mary’s Old chapel in Auckland, a Gothic Revival chapel constructed in 1866. It was beautiful, and it felt special to commit to each other in a place with so much character and history. We both also have family connections to the chapel and St Mary’s College, on the grounds of which the chapel is based.

THE VENUE
We loved that Mission Bay Pavilion had indoor and outdoor areas that allowed people to circulate throughout the night, and also an amazing events team, Nellie and Vinci, who would manage the little but important details. It has a very cool interior, while the heritage-listed stone house adds a lot of charm and character. 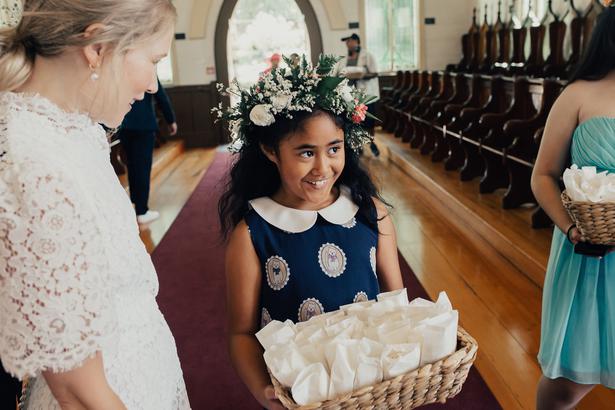 THE RINGS
Dan: I worked with Greg and Claire from Meadowlark on Zoe’s engagement ring. I knew it had to be classic but with something slightly off-kilter — literally, Zoe — so we settled on a solitaire ring with a reclaimed grey diamond. Greg and Claire really understood that though there are parts of us that are traditional, we are also very non-traditional in other aspects of our life, so a stone that was not common was important. Our weddings rings were from Meadowlark too; a simple gold band for me and eternity band for Zoe.

Zoe: I love my ring; it’s dainty and classic. Meadowlark posted a photo on Facebook, and some troll commented that grey diamonds are “trash diamonds” — which I thought was hilarious, and somehow perfect for a Westie nerd who grew up to work in fashion and have Kate Sylvester make her wedding dress. 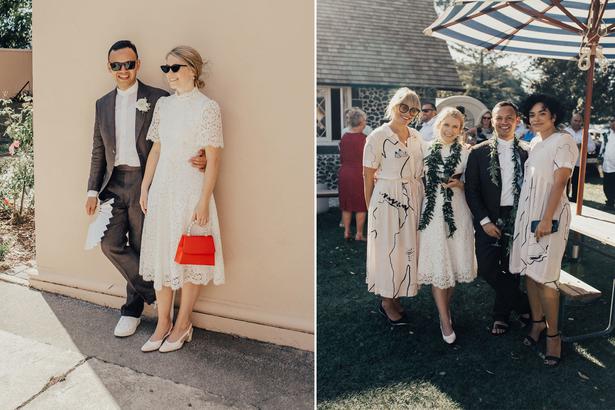 THE DRESS
I’m lucky to have relationships with many local designers where I knew I could ask them to make me something special — I chose Kate Sylvester because I knew she would immediately understand what I wanted, and would also make the process simple and fun.

She made a dream dress that captured me perfectly: practical and whimsical. I didn’t want a traditional wedding dress; I’m not a gown person. I also liked the idea of something I could wear again at some point; it felt wasteful to have a dress for one day.

There were a few design elements I loved — an A-line silhouette, ruffled high-neck, sleeves, some kind of back detail, grosgrain ribbon, midi-length — that Kate took and translated into one look. It was her idea to do the amazing black bow at the back. 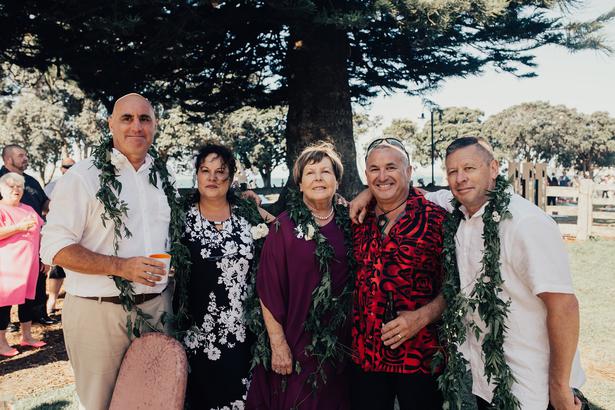 I wore Meadowlark pink pearl earrings, Chanel sling-backs, a vintage bag from Etsy, and carried a white paper fan because it was so damn hot that day.

I also had a special family heirloom attached to my bouquet, a silver purse from 1939 that has been carried by every bride on my mother’s side of the family.

THE SUIT
Dan: I wanted a relaxed suit inspired by those in the 1940s with a pleated trouser and went to Murray Crane of menswear tailor Crane Brothers. It took several weeks as it was sent to Italy to be made. Murray really understands my style and we selected a beautiful dark brown Solbiati Tolomeo linen, with a wide leg, an unlined blazer and light linen collarless shirt. I wore it with white sneakers for the ceremony, and changed into Greek leather sandals later on, because it was boiling hot.

THE BRIDAL PARTY
Zoe: My bridesmaid and sister Jade wore a simple black dress we had made online, and Dan’s groomsman Keith wore a navy linen suit. My nephew Zac, our junior groomsman, wore a white linen shirt and Van’s. One of my earliest and best wedding planning decisions was asking Anjali and Rachel from Twenty-seven Names if they would make a dress for our flower girl Annelise (Dan’s cousin), using their adorable cat cameo print from a 2012 collection. 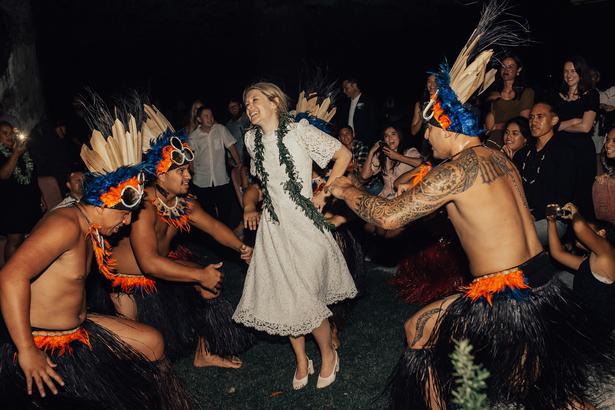 Zoe dancing with dancers from Drums of the Pacific. Photo / Anna Kidman

ENTERTAINMENT
We arranged for Drums of the Pacific to perform after dinner, as a surprise for our guests (and the strangers at Mission Bay, who loved it). It was an amazing memory watching them, and watching our friends and family watch them — it kicked off the party portion of the celebrations.

This was probably our proudest moment, having family and friends of all ages come together and completely enjoy themselves; outside under the stars. A proper dance to cheesy music is the best part of any wedding, so we were determined to make ours epic. We’ve been to some great parties where DJ Manchoo from Flava has played, so knew we would book him as soon as we got engaged; he played a mix of throwback music that appealed to all generations. We wanted our wedding to be “unstuffy” and we love having a good time.

THE PHOTOS
Zoe: I was very passionate about this. Having been deep in wedding planning, I felt they had almost become performances for “the photo”, with everything geared towards getting a shot that will get you into a wedding magazine or a great Instagram shot (yes, ironic now our photos are in a wedding issue). You know the wedding shot when the bride and groom stand aloofly apart in some industrial area or on a street: why?! 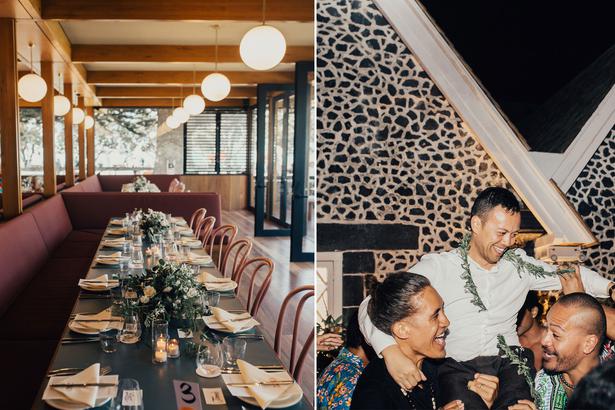 The table settings at Mission Bay Pavillion ; Dan being lifted up during the siva by family. Photo / Anna Kidman

So our brief for Anna — who we knew a little through work events — was to capture moments, rather than posed shots. All my favourite photos are spontaneous, warm moments: my sister laughing at me getting emotional after putting my dress on, my nephew about to throw a fistful of petals at us, Dan doing his Siva with his family, our two young cousins sitting on the wooden fence taking time out. THE FLOWERS
Zoe: We wanted something very simple, white and green, with fragrant stephanotis that captured the summer mood. The chapel is so beautiful we didn’t want to decorate it unnecessarily: we had two arrangements at the altar by Naomi from Leaf & Honey.

READ: How To Arrange & Style A Vase Of Romantic Wildflowers

My Aunty Gaylene, an ex-florist, made my bouquet; white and green with daisies, baby’s breath and spray roses. I had a very clear vision — small, sweet and spring-like, basically something that looked like my mum and I could have picked from the garden that morning. 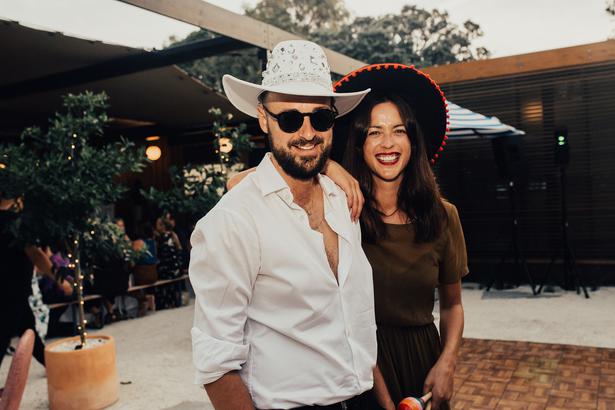 ON THE DAY
Neither of us love being the centre of attention, so I think we were both quite nervous. But as soon as I walked into the chapel and saw Dan, I couldn’t stop smiling and acting like a big goofball. I was almost giddy with relief — all our planning and organising was over, and we could just enjoy where the day took us.

We’re both introverts so deliberately had a few moments on our own, away from the madness — everyone is coming at you (with love) from all angles at all times, so this was one of the best ideas we had.

It was a treat to see people from all parts of our life come together. We come from really strong-minded families who have helped us become strong-willed people and it was a way to say thank you for being such big influence on our lives. 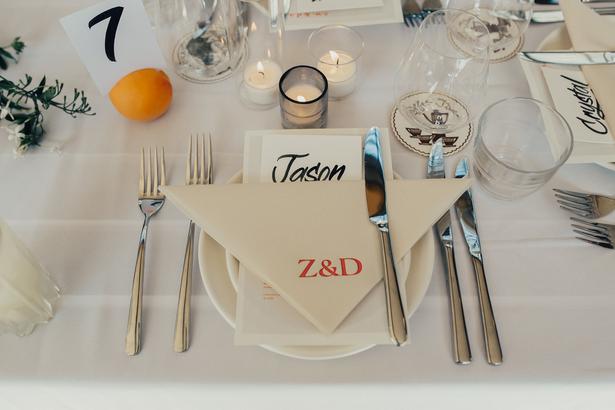 "We wanted our friends and family to feel comfortable, and for our guests to have the most fun they had had in a while." Photo / Anna Kidman

SPECIAL MOMENTS
Some of the sweetest moments were those we didn’t plan: Dan’s cousins created leaf ‘ulas (necklaces) for us, my parents and nana, presenting them to us at the reception, while my cousin Blake surprised us by performing a haka. One stressful but ultimately funny moment was when we arrived at the reception and my dad told me our wedding cake had collapsed in the summer heat (they didn’t make it, but luckily Mission Bay Pavilion’s amazing pastry chef did her best to fix it). 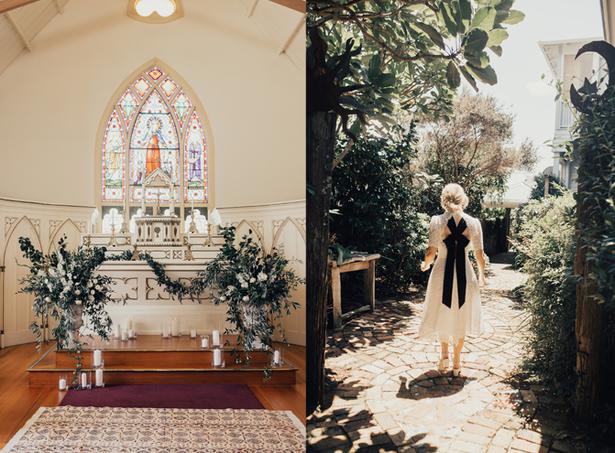 The chapel featured fine mats from Dan's grandmother and urns filled with fresh flowers from Leaf & Honey; The back of Zoe's dress. Photos / Anna Kidman.

THE HONEYMOON
Three weeks in Miami and magical Jamaica, the absolute trip of a lifetime. 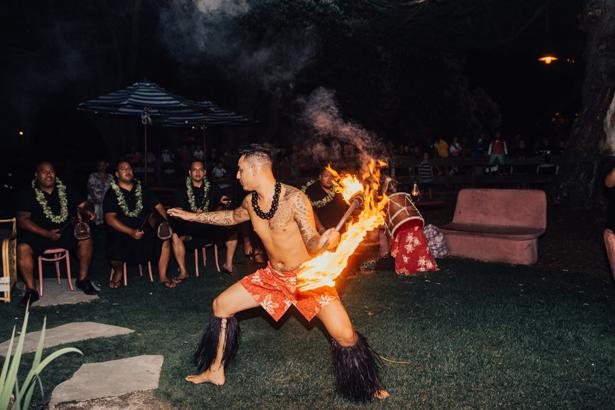 Firedancers were a surprise for the special guests and got the party started. Photo / Anna Kidman

Jacquie and Ji Fraser, of the band Six60, share the details of their unique approach to their wedding

From informal affairs to events of epic proportions, these weddings are ones to remember