DESTINATION
We wanted this wedding to represent who we were as people and it was so important that it was somewhere that was meaningful to us. Henry grew up in Nelson and we both had very fond memories of being down there together. We were very lucky to have Henry’s family farm in Thorpe (near Motueka) as a blank canvas to create our perfect wedding. It is a beautiful setting with native bush and blocks of manuka. We couldn’t think of a better place for our nuptials.

Our ceremony was set within a stand of manuka in a handmade mandap (Indian wedding house) created from the manuka and built by Henry, his father and one of our best friends. It overlooked a plateau with views of the western ranges. The mandap was draped in white chiffon and decorated with marigold flowers in a forest full of orange and white lanterns. We had the tanpura playing in the background as guests gathered, sitting on covered hay bales. It was the perfect arrangement of East meets West.

APPROACH
We saw the setting as important. We have both had amazing lives growing up in New Zealand and wanted to capture some of the raw beauty of it on our wedding day. My Indian culture meant that very bright colours, dance, music, singing and Indian food were a must. We think we were able to blend all of these aspects with the natural beauty of a New Zealand farm. 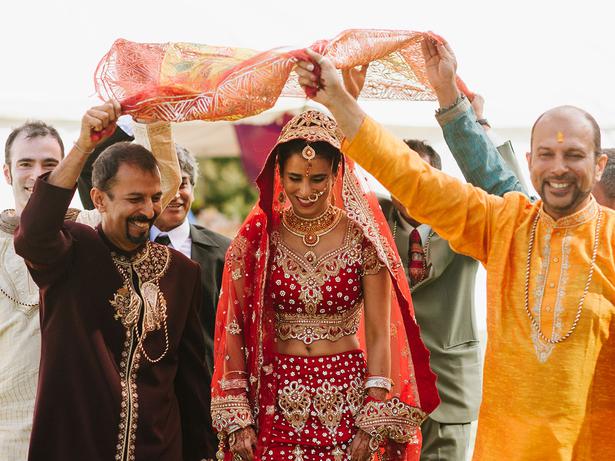 PROPOSAL
Henry had secretly asked my father permission the day before we travelled overseas to Asia. On our way back home we had planned a break in Fiji. Unfortunately, I got very sick shortly after arriving — hardly the makings of a romantic getaway! Sadly, this meant the Plan A proposal Henry had arranged quickly went to ground. I started to feel a bit better once arriving back in New Zealand. We had barely got in the door from the taxi with our bags when he asked me.

PRE-WEDDING EVENTS
Indian weddings traditionally last for several days, so a week prior it all started with a Sangeet night in Hamilton. This is a celebration with music and dance to prepare for the big event. It was also the day where Henry and I had our legal wedding, which was very small and intimate with just our parents. The rest of the functions were in Nelson. The first being Mehndi night, this is when henna was applied to my hands, arms, feet and legs. Many of the guests also had mehndi applied to their hands.

The day prior to the wedding, we had the Haldi ceremony, this is where everyone applies a turmeric paste all over the bride and groom. The colour yellow is considered very auspicious and signifies prosperity for a new couple. Once washed off, it supposedly makes you look bright and sparkly for the wedding day.

The morning of the wedding we had the Chura, where my uncle placed the wedding bangles on me, while my female family and friends sang traditional folk songs. This was, and usually is, a very emotional ceremony.

DRESS AND SUIT
I wore a red and gold langa (traditional Indian dress) designed by Khazana. It was heavily hand-embroidered and encrusted with crystals making it weigh just over 7kg. It was accessorised with gold jewellery including a nathani (nose piece) that was handed down to my mother from her mother. My heels were also gold and crystal encrusted made by Paruolo. Henry wore a red and cream Sherwani (traditional Indian suit). His turban was tied by the elder males in my family and he arrived on a white stallion! 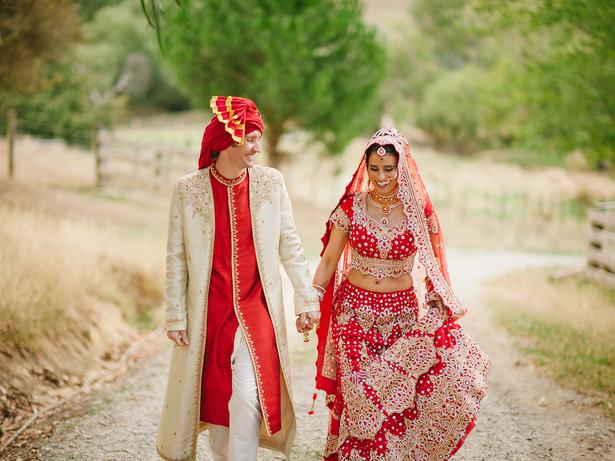 BRIDAL PARTY
Everyone from both sides of the family were dressed in Indian attire.

ENTERTAINMENT
There was a local string quartet that played during canapes after the wedding ceremony. We also flew down DJ Jimmy from Auckland, who specialises in Indian weddings and who was able to give an amazing mix of eastern and western music. Members of the family got together during the reception and gave various performances that they had prepared for the celebration. We also had two tandoori chefs come to make fresh naan bread in a coal tandoor oven that we set up in the marquee — we hadn’t expected this to be so exciting to watch.

SPECIAL MEMORY
There were so many amazing moments during our wedding. One that stands out is having my oldest brother Pankaj marry us. This involved him learning all of the ancient wedding scriptures that are in Sanskrit — a whole new language for him. It was truly memorable to listen to them being recited with such meaning for us. Another memory is mixing things up a bit and actually starting our wedding reception with the first dance. By the end of it we had all the guests on the dance floor, it was a great way to get a party started!

TOP TIP
Remember that the hardest part is done, finding someone to build and share your life with. So make it as personal and unique as possible because it really is such a memorable fun occasion to celebrate. We can both honestly say that we didn’t want the day to end.

Love songs, smash hits and stellar duets to take you from aisle to dance floor

Floral, pastel or black? Shop our pick of cool bridesmaids dresses, for whatever the wedding style