The actor, director and Tourism Fiji ambassador discusses islands, 'Survivor', and how she gets reflective Ask a film star how she plans to spend her much-awaited break at home, and “cleaning” is possibly the last answer you’d expect.

But after a protracted 18 months away from her Sydney home due to Covid, LA-based Rebel Wilson discovered her house needed a little TLC.

“It’s very dusty,” she laughs, during an exclusive chat with Viva. “A bit of mould. Yeah, it’s just what I thought I’d be doing — de-moulding the couch.”

The Aussie comedian is leapfrogging off a meaningful and momentous 2021 with a covetable new gig. Not only did her much-publicised “year of health” see her adopt a healthy eating and exercising regime that led her to drop more than 30kg, she was also named as the face of Tourism Fiji’s reopening campaign that, until recently, was in limbo yet again due to Covid.

The reportedly seven-figure deal and ensuing TV commercial shows the actor cast adrift on a boat before stumbling into happiness on Fiji’s Vomo Island, bringing Rebel’s warmth and humour to a not-so-arduous task: convincing weary Antipodeans into holidaying in paradise.

“It was the most brilliant eight days,” she says of the trip that 10 members of her Hollywood team dropped everything to join her on.

“The weather was perfect and sunny but it was the people — they hadn’t had any resort guests in a long time because of the pandemic. Their warmth and their energy — they’re the most welcoming people. And you forget sometimes. Because I’ve been working. I guess people still need entertainment during the pandemic.” 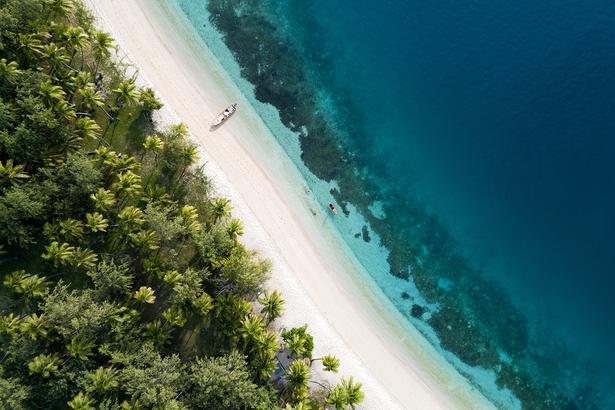 She’d been to Fiji on a cruise ship as a child, and the filming trip brought back memories of running wild on the sand and eating coconuts. She’d not been back as an adult though, with much of her working life based in the US and Europe, “so it was awesome to come back and be like, ‘Oh my God, how heavenly is this place?’”

It’s not hard to see why she was selected to front the campaign. She has the star power of South Australia tourism ambassador Chris Hemsworth but more so, an accessibility.

Add to that the vulnerability she showed via Instagram as she powered her way through her daily workouts, or spoke openly about the fertility struggles that drove her to address the “emotional eating” that had become habit, to her newfound appreciation for her sense of self and wellbeing, and it’s no wonder the world celebrated her transformation with her.

Given the multitude of articles and social media devoted to documenting it, Viva has been vetoed by her PR team from addressing the topic, but Rebel does touch on it, unprompted, later in our 20-minute chat.

READ: How It Feels To Have A Tropical Fijian Island All To Yourself

Not all of her travel escapades have been as breezy as a Fijian holiday. There was the time she contracted malaria in Mozambique when she was 19. The drugs she was given in hospital tripped her out, and she thought she was an actor, a hallucination the trained lawyer eventually made a reality, first on stage and TV in Australia, and then when she cracked Hollywood at 31, starring in Bridesmaids and the Pitch Perfect franchise.

This was followed by movies she produced in 2019 including Isn’t It Romantic and The Hustle; she also starred in New Zealand director Taika Waititi’s Jojo Rabbit and the film adaptation of Cats.

Nor has her more recent global jet-setting been without its controversy. In 2020 she was called out for criticising Sydney lockdown restrictions, seeing her branded as “privileged” and “entitled”, and last year was blasted for travelling by private jet to the Super Bowl in the US when most were abiding by stay-at-home rules.

And though there are still hints that the star lives in a different universe to the rest of us when she says she now laughs about the “tiny cabin” she stayed in on a Fijian cruise as a kid (as opposed to the luxury holidays she now takes), she’s not entirely above the clouds.

When it comes to holidaying, she loves to “go on a walk and get reflective about where my life’s at,” she says.

“Because I do work my ass off and I’m so busy, I always say, ‘I’m not gonna do anything, I’m just gonna lie by the pool or on the beach and just chill, and don’t call me, I’m zoned off’. But then when I get there and I look at the activities menu or something then I’m like, ‘Ooh snorkelling’. Or you can go and explore this remote little island for a day — I’m like, yeah, I don’t know when I’ll next be back. I’ve got to explore and do something adventurous.” I don’t know whether it’s from turning 40 but personal happiness is so, so important to me,” says Rebel Wilson. Photo / Laurie Bailey Photography

She’s just as keen not to rest on her laurels when it comes to her career. Still very much a queen of laughs (and one who has never felt the need to hide her Australian accent in Hollywood), she has several irons in the comedy fire, and challenged herself to a busy past year, just as much behind the lens as in front.

First there’s Senior Year, a comedy screening on Netflix later this year, which she produced. She also wrote, produced and directed Girl Group, a comedy about K-pop.

Elsewhere, just as she worked with all-female ensembles in both the Pitch Perfect franchise and Bridesmaids, the notion of girl power is what’s attracting her attention right now.

It’s not lost on her that her foray into Hollywood came at a time when women were finally getting recognition, not only for being funny but for refusing to kowtow to abusive men; she recently spoke out about two incidents of misconduct and sexual harassment she’d endured pre-MeToo.

“The movies I’m making are very girl power,” she says. “And I’m proud of that. Because it’s a bigger message. Yes, the films can just be funny and entertaining, but it makes me happy knowing especially young girls from all different countries around the world will get to watch it… Seeing me, for example, drive a car or write with my left hand — things that are just natural to me can be very empowering [to others].”

In 2021 she released her first children’s book series, Bella the Brave, about a girl who discovers her voice, drawing on skills she’s fostered since her early days starting out as an actor.

“That was how I got my first roles — by writing a play and casting myself in it.” She agrees it was a successful strategy, “but it’s just a lot of work”, she adds.

“A tonne of work and a lot of responsibility, and to make things that are diverse and inclusive as well. It just felt like, coming up in the business, often I had to work for guys. Now, I can control my own narrative, and more of the stuff that I’m in. And that just feels awesome.

“At a certain point as an actor you want to have that kind of control over the project, so it’s a natural step.”

Still, it means she clocks in seven days a week, so when she can get a fun holiday in, she’ll take it. The next time she heads to Fiji it may well be with her mum, an international dog show judge, who as soon as lockdown in Australia ended, booked herself a Fijian holiday, oblivious to the fact that her famous daughter had just signed on to film a commercial.

As for Rebel, she knows she’ll be back, as there are just too many islands she wants to experience for herself. More importantly, Fiji is where her favourite TV show, Survivor, was filmed.

“Jeff [Probst, the show’s host] actually sent me a video message when he saw the ad, and invited me to come on the set, which would be my dream come true. That’d be amazing.”

Looking to the year ahead (but without directly referencing her newly adopted wellbeing strategies), I ask her what is likely to make her happy.

“I don’t know whether it’s from turning 40 but personal happiness is so, so important to me,” she says.

“Taking big leaps with my career, like directing a big Hollywood studio movie, feels very fulfilling. Taking that leap out of my comfort zone. I also want to take the time to chill, because I am someone who just works really, really, really hard all the time. So to take some little breaks and some holidays and lie on the beach in Fiji…

“And then I’m on a fertility journey as well. So hopefully I get some kind of positive news. It’s been a bit of a roller coaster with some not so positive news for the last few years. Whatever happens will happen.

“But I just hope, for the world as well, there have been so many people struggling with so many hard things with this pandemic and I think I’m like a lot of people ... You just want everyone to start enjoying their lives again.”

Where to sate your pasta cravings, buy funky glassware, attend a festival of light, and more

Including an icecream-hued hotel, an effervescent trattoria and an edgy arts precinct

5 Epic Fiji Day Trips To Suit Just About Everyone

Whether you're a party goer or seeking romance, here are fun and efficient ways to see more of Fiji

Fijian culture and cuisine are the star attractions at this unique luxury resort where Dan Ahwa discovers an elegant escape wit...