Rose Matafeo opens our interview by saying, "I simultaneously hate talking and also never stop talking so . . . " before trailing off and stopping talking.

It's a start that sees contradictions crashing upon each other like waves on the shore. But it also serves to succinctly sum up Rose herself.

During a relaxed half-hour at a small cafe tucked down an alley behind Auckland's Karangahape Rd, she'll smile and laugh her way through sentences that plummet into deep holes of self-doubt or scratch at the ferocious and unrelenting itch of anxiety.

Serious questions will hit the defence of a jokey answer while frivolity will send her into deep thought and mention of her hugely impressive successes are instantly downplayed.

"That's my style!" she exclaims when I later suggest that she's selling herself short.

"That's actually my brand of comedy. Selling myself short. I love that." Then, leaning in conspiratorially, she says, "sell yourself short, then anything you do will exceed the low expectations you've set for yourself", before roaring with laughter.

This philosophy explains why she's practically falling out of her chair to insist how badly she is at doing the things at which she is — spoiler alert — exceptionally good.

So she’ll say things like, "I'm fully aware that there are far better actors than myself," or, "I never felt confident with acting or my ability to do it," as we talk about her starring role in the new movie Baby Done.

Although she's a regular on our television screens, this is the first time she's been the lead in a movie.

Ask her how she feels about that and she says, "you know, terrified. I hadn't thought about it much as I was doing it. It was like, 'Oh yeah, I'll just be in this thing'. It's quite scary. It's always nerve-racking to open yourself up to . . . " Suddenly she cuts herself off with a laugh.

"I was about to say criticism but no one's criticising it yet. What am I talking about? I'm always the worst-case scenario guy."

'Worst case scenario' is also a good descriptor for the situation in which her movie character Zoe finds herself. 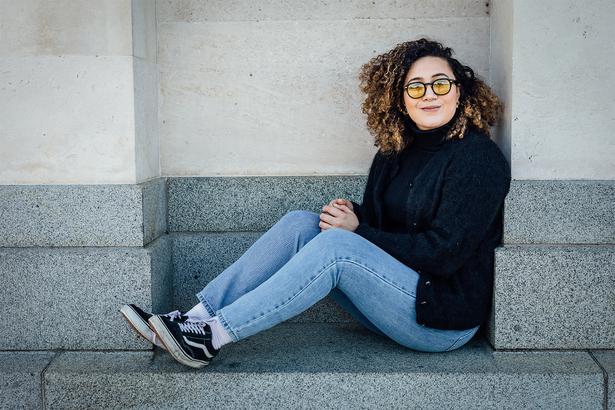 "It's basically the story of a woman, Zoe, who gets pregnant and then completely freaks out. Which I think is a more common occurrence than not. And certainly it's something that would happen to me if that happened," she says.

"It's a film about freaking out, which is something I certainly really relate to."

With the unplanned baby on the way, Zoe frantically sets off on a mission to check off as many big life experiences as possible before the little bundle of joy arrives and changes her life forever.

Think of her quest as a sort of bucket list for her child-free life.

"It creates a lot of chaos between her and her partner," Rose grins. 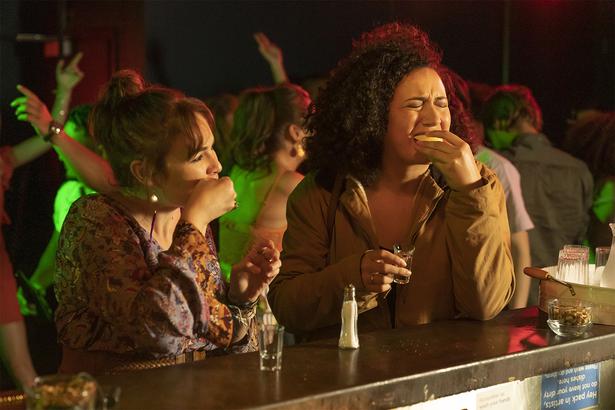 I start to ask a question saying, hypothetically, if she was to find out she was pregnant tomorrow what . . .

"Sure," she interrupts, nodding slowly, her eyes widening in horror at the thought. "My God. F****n hell."

She goes quiet, furrows her brow and slips into a deep think. I take a sip of coffee. Eventually she answers.

"I'm answering in my mind and deleting all the answers that I can't say," she replies, miming out checking items off a list and stifling a smile that threatens to break into a grin.

"I'm not a person who has bucket list of things, to be honest. Because personally, I'm a very neurotic, nervous, anxious person who will never be happy so I don't really have a list. I've done a lot of things in my life that I’m already quite happy with, like, proud of, so, I don't know."

But the idea seems to have sparked something and she begins to muse aloud.

"I think the concept of having a bucket list before something like that happens, is a bit foolish. Your life doesn't end. It just changes. It fundamentally changes but you still go on living. People are very scared, not scared but wary, of massive change. Change over time is easier than something that . . . pregnancy is nine months then your life changes forever until you die. The speed of that change is so terrifying." 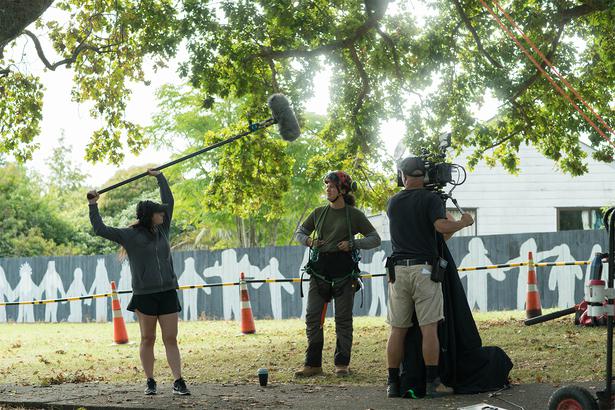 Behind the scenes of Baby Done. Photo / Geoffrey Short.

Then, struck by a thought she says, "I'd have a new bucket list. Things I'd do with my kid, basically."

But before she can say what things would be on her kid-friendly bucket list she pulls up the handbrake and 180s around.

Then, in an exaggeratedly exasperated tone she blurts, "with a kid you have to go on the s**t rides! Kids can't go on the cool adult rides."

Then the facade breaks and she collapses into laughter, "I can't believe I said that . . . But nah. A bucket list would terrify me. To write things down and not be able to achieve them would kill me. It would absolutely kill me."

READ: Why 2018 Was The Year Of Accolades For Comedian Rose Matafeo

After a brief detour into the merits of Disneyland's Little Mermaid roller coaster she eventually comes to a conclusion on her ideal list.
"Get up. Go get a coffee. Get a new rego for the car. Tick, tick, tick."

This is one of the few differences between herself and Zoe, a character she describes as, "not too far away from me as a person".

"That's what I find difficult about acting. Whenever I have to act in a role, it's always this slightly different version of myself but I can't really tell which version. With stand-up it's so much easier because I know exactly what character I'm playing," she says.

"I'm not the kind of person who thinks too much. When it comes to acting I'm not like, 'what is my motivation?'. I show up and I'm like, 'all right, I'm being the person now. Let's do it'."

She shrugs and says, "that's probably why I was cast because I'm not too dissimilar to that total attitude".

She's downplaying it, of course, as her performance in the movie calls for more than just showing up for freakouts and threesomes.

Given that the film's about a relationship straining through the biggest life upheaval possible, there's more than a few spilled tears along the way.

"In my stand-up there's a bit where I cry. So every night I had to try and tap into some little thing that would make me cry. I performed that show like a 150 times and so . . . that's a lot of crying," she says, referencing her show Horndog, which won the Edinburgh Comedy Award 2018 for Best Show at the Edinburgh Festival Fringe.

It was recently filmed for HBO and is streaming on Neon.

"I've become a bit dead about, 'what can I find now to cry about?'. You go through the Rolodex of trauma in your life. 'Oh God, imagine if my cat and my nan died at the same time!'. I tapped into that. But nothing too bad. Nothing too messy. I'm no Daniel Day Lewis. I did not get pregnant for the role."

Again, she's downplaying her talents. Crying on demand is not easy. Even less so in front of a gajillion people.

So given that she's surfing a tsunami of success right now, why is she so plagued with self-doubt?

She's the lead in a movie, her comedy special was just released worldwide, and she's writing and about to star in her very own sitcom for HBO.

Shouldn't she be riding high? "I will find something to worry about in any scenario," she sighs.

"It's hard because I've worked since I was a teenager. In terms of comedy I started so young. And I feel like I just never stopped. Especially with comedy, the real tough thing is that it's a really lonely process. To get better, you need to be your own harshest critic in order to see things, correct them and get better every time you perform and every show you do. And that's fuelled by a type of anxiety which is self-critique and it's a dangerous thing to deal with," she explains.

"On one hand, it's great. It propels you to be better and constantly critique your own work and find ways to improve. But too much of it leads to full-blown anxiety."

"I have a real problem with enjoying moments of . . . the other day I was trying to explain the feeling of something good happening and feeling fond of the memory and (my friend) was like, 'I think you’re describing pride there, Rose.' I was like, 'Oh God, yeah. I don't even know what pride is'. It’s so deeply ingrained, particularly in New Zealanders and more so women, to not sit in those moments of enjoying that kind of success."

"I'm trying harder to do that but I feel very uncomfortable with any kind of feeling good about success. Because what does that turn you into?"

Scrunching her face in distaste she says, "I'd hate to be someone who was . . . proud. Of things you've done. I hate that."

"And I hate that it feels embarrassing to be proud of the things you've done. It's like, f**k! If I was a furniture maker and I made an awesome table, it's fine to be proud of that. But, for some reason, when it's something like comedy it's such an uncomfortable feeling to feel proud."

The conflict bouncing around her head eventually manifests itself into a mock scream, "Arrgh!", before she quietens down and says, "but it's my brand of comedy so . . . at least it's consistent.

"Unfortunately, I've tied my ability to make work with an endless anxiety of 'am I doing enough? What am I doing next? Am I good enough?' All of the good things that are happening right now are the product of years toiling away making stuff."

Then she says, "I just want to continue making stuff," as the film's publicist comes over and leads her away to begin a full day of scheduled Zoom interviews with the international press.

• Baby Done is in cinemas now